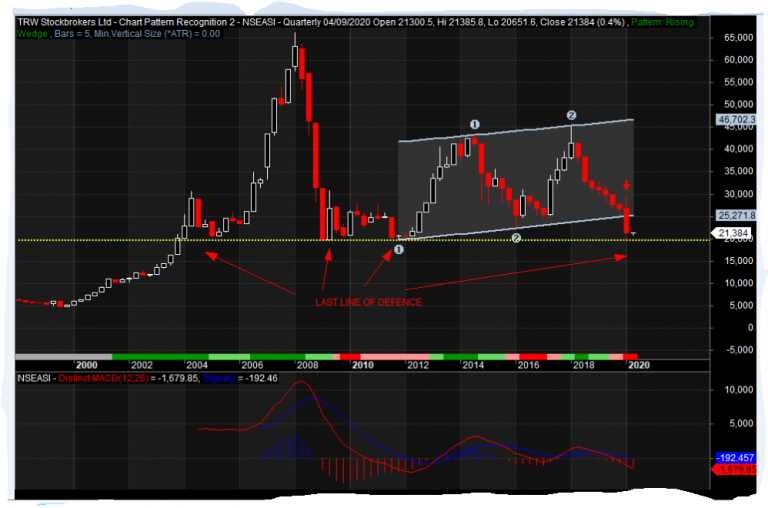 Market Update for the Week Ended April 9 and Outlook for Apr 14-17
The performance of the Nigerian Stock Exchange (NSE) in the past week was mixed and strong, resisting further decline after the composite All-Share index hit a new low.
The recovery was driven by the increased bargain hunting among medium and large-cap shares, with sectorial indexes rising amidst optimism that the worst of the Coronavirus (COVID-19) pandemic could be over, or flattening cross the globe. The optimism is also supported by the rollout of economic stimulus packages by the government, their central banks, and multilateral agencies to mitigate the effects of the virus on economies across the world over.
Last week, for example, was particularly eventful, with the publication of a report Africa’s Pulse by the World Bank showing that Sub-Saharan Africa is headed for its first recession in 25 years amidst the spread of COVID-19. According to the report, the pandemic is expected to cost sub-Saharan Africa $37bn to $79bn in output losses this year due to trade and value chain disruption, among other factors, as the region’s economy contracts by between 2.1% and 5.1%, as against a robust 2.4% growth in 2019 (READ MORE). There however announcements by the African Development Bank (AfDB) of a $10bn package to ensure that its members do not experience the worst-case scenario during this period (READ MORE), while the African Export-Import Bank (Afreximbank) is also gearing up to assist members out the murky waters (READ MORE).
Still on the NSE, it may be too early yet, technically so, to say the market has rebounded, despite the strong sentiment report for the period with more buying positions. We believe that there are some key levels from a technical perspective that will confirm the real market rebound and will attract more people to the market, despite the happenings in the system.
Investors are expected to study the market’s recovery pattern after the 2008/09 financial market meltdown and the regulatory induced crash, as well as the three consecutive years of decline from 2014 to 2016, before rebounding in 2017. This should guide investors and traders, as The COVID-19 induced down market attempts a recovering move.
Many analysts are of the view that market recovery will be long in coming this time, considering the rate at which it has declined, considering the oscillating oil price that has touched an 18-year low recently. This concern may have been taken care of reasonably by the outcome of last week’s meeting by members and non-members of the Organisation of Petroleum Exporting Countries (OPEC+), especially the slash in oil output across the board by 23%, which translates to 10m barrels per day in the first instance (READ MORE). There are reports that Mexico, a non-OPEC member, which was expected to voluntarily cut production by 400,000bpd, has opted out of the deal.
How fast the NSE index recovers would, however, be a function of how fast it fell and the sentiment behind the trend at the time. All factors considered Investdata expects the Nigerian stock market to look up before this year-end.
The short-term position you are taking now will not give much return compared with what long-term real gains could look like say in one or two years. Traders and investors should, therefore, keep an eye fixed on emerging economic trends to make good returns.
However, the Q1 earnings reports from Infinity Trust Mortgage Bank hit the market during the period under review, just as the 2019 full-year audited results from Lafarge Africa (READ MORE) and FBN Holdings (READ MORE), with dividend recommendation of N1.00 and 38 kobo respectively. The low price attractions and dividend news are factors driving the positive sentiments, as more companies notify the exchange of their Q1 closed period and AGM dates.

Movement Of NSEASI
The key performance index for the week under consideration looks impressive after recording three straight sessions of bull-run and one day of bearish outing before the public holiday of Friday and Monday declared by the Federal Government to celebrate the Christian feast of Easter.
Trading for the period had opened on a negative note, with the NSEASI losing 2.02% on Monday, a trend that was short-lived on Tuesday amidst the increased demand for financial services stocks and other medium and large caps that pushed the index up by 1.24%. This positive sentiment was sustained as investors reacted to dividend declarations, closed period and AGM dates announced to close higher on Wednesday and Thursday by 0.71% and 1.47% respectively. These brought the week’s total gains to 1.37%, compared to the previous week’s 3.51% decline.
Specifically, the NSE index gained 289.41 basis points last week, after opening at 21,094.62bps, during which it oscillated between the intra-week high of 21,385.85bps and low of 20,651.59bps on seeming positive sentiments, and high volume. We note that during the week access to the NSE’s trading engine was entirely through remote platforms, following a shutdown of the trading floor following the Federal Government’s lockdown due to COVID-19. During the week, the benchmark index broke down the 21,000 mark to test 20,651.59 points, just as market capitalization climbed N148bn, closing at N11.14tr, from the N10.99tr it opened, representing a 1.37% decline.
The advancers table for the week was dominated by medium cap stocks as high buying interests in banking, insurance, manufacturing and telecommunication stocks and others that had suffered losses in recent times. This was revealed by the market breadth, as gainers outnumbered losers in the ratio of 35:18. The momentum behind the week’s performance was weak, as the Money Flow Index dropped to 25.98bps from 31.43bps in the previous week.
Transactions in terms of volume were higher than that of the previous week, as bargain hunters hit the market to take advantage of the low prices considering the high reward to risk currently prevailing in the equity segment of the financial market.
Meanwhile, discerning investors have continued to take advantage of the low prices in the midst of panic selling and confusion, to reposition their portfolios for the medium to long-term, as the earnings reporting season for Q1 and full-year 2019 has been extended to May. The positive and strong sentiment during the period was confirmed by Investdata’s Sentiment Report for the week, showing 100% ‘buy’ volume, on a transaction volume index of 0.87.

Mixed Sectoral Indices
The sectoral performance indexes for the week were largely bullish, except for the NSE Industrial Goods and Oil/Gas indices that closed lower by 6.59% and 4.76%, while NSE Banking led the advancers after gaining 12.65%, followed by the NSE Consumer Goods, and Insurance which were up by 6.56% and 0.18% respectively.
Market activity in terms of volume and value was up by 59.48%and 76.84% respectively to 2.44bn shares worth N19.93bn, as against the previous week’s 1.53bn units valued at N11.27bn. The week volume was boosted by trades in financial services stocks, especially Omoluabi Mortgage Bank, Guaranty Trust Bank and FBN Holdings.
The best-performing stocks for the week were Lafarge Africa and Wema Bank, which gained 41.34% and 25.53% respectively, closing at N12.65 and N0.59 per share on low price attraction and the dividend announcement. On the flip side, Ardova (Formerly Forte Oil) and Skyway Aviation lost 18.48% and 15.61% respectively, closing at N11.25 and N2.00 per share on selloffs and market sentiment.

Market Outlook
We expect a mixed performance in the new week due to profit-taking from the recent rally, expected markdown for dividend declared and more inflows of 2019 full-year and 2020Q1 results, as the government implements measures to contain the COVID-19 spread while addressing the adverse effects on the economy. Already, we notice increased transactions in healthcare and other defensive stocks that are likely to survive this meltdown, even as global markets are on the recovery path already.
Also, do not forget to identify and play defensive stocks among the many fundamentally sound companies that remain depressed, making them attractive for bargain hunting among market players. This has also resulted in significant improvements in Dividend Yields of stocks, even as we note that fund managers who held cash before now, may have to rethink the strategy and go for value stocks with high upside potentials.
This is just as more liquidity flow to high Dividend Yield stocks with sound fundamentals, a situation that will also be based on the seemingly positive outlook for the domestic economy, despite the mixed outlook for 2020 from various analysts.
While discerning investors should take advantage of the current low stocks valuation to position for the medium to long-term, it is noteworthy that the Nigerian equity market is selling at a discount and therefore offers high upside potential.
On a bargain-hunting motive supporting positive performance, especially with many fundamentally sound stocks remaining underpriced. With a dividend yield of major blue-chips continuing to look attractive in recent weeks, we expect speculative trading to shape the market’s direction, despite the seeming mixed outlook.
To position for the short to long-term, this is why investors should target fundamentally sound and dividend-paying stocks for possible capital appreciation in the New Year. This was noted in the 10 golden stocks and trading ideas for 2020, as discussed extensively during the Investdata 2020 Opportunities & Trade Ideas Summit.
Meanwhile, the home study packs of Invest 2020 Opportunities and Trade Ideas Summit containing the 10 Golden Stocks for 2020 are available with an average return of 13.37% in less than 30 days. To obtain your pack send ‘Yes’ or ‘Stock’ to 08028164085, 08032055467, 08111811223 now.