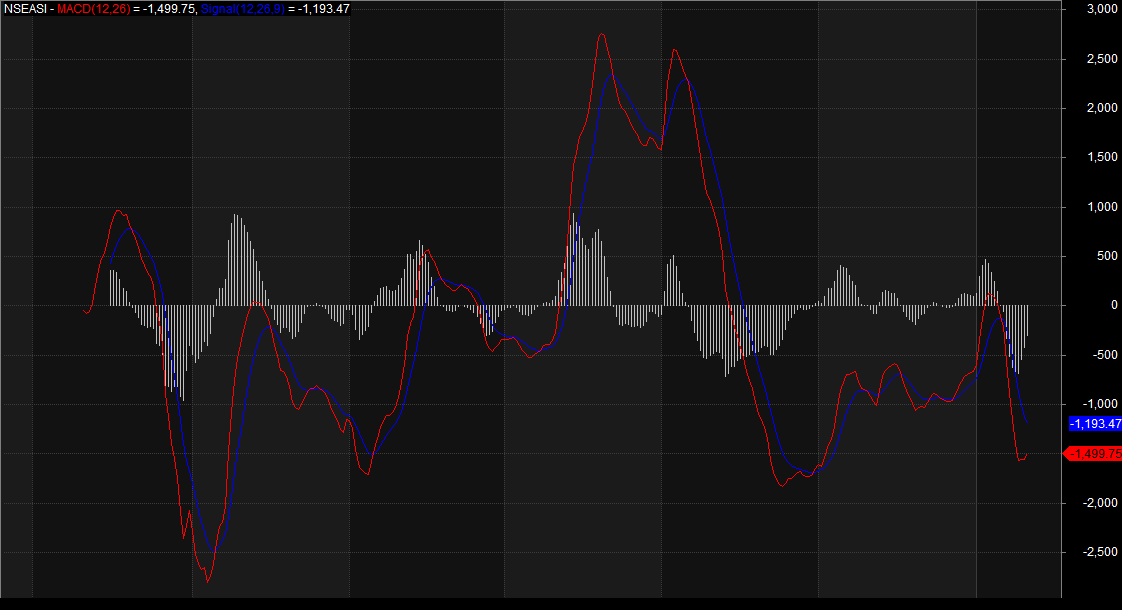 Market Update for the Week Ended April 30 and Outlook for May 4-8
The composite All-Share index of the Nigerian Stock Exchange (NSE) closed bullish last week, closing higher on a positive trend and strong demand for banking, insurance and diverse large-cap stocks, which reversed previous week’s loss in the midst of profit-taking, and the influx of quarterly earnings by listed companies. There was also the effect of window dressing for the end of the month which came with portfolio realignment by smart money.
This situation has technically pushed the market into a short term overbought region, signaling an imminent pullback in the early trading sessions of this new month.
The sharp divergence between the money flow index on the daily time frame and weekly should of a serious cause for concern among traders, especially as inflows to the market on Thursday read 94.04 points. This is an indication of the inflow of funds, while on a weekly time frame it is at 14.37 points, looking down to signal the exit of funds.
We observe profit booking on financial service stocks in the final trading minutes on Thursday, despite the fact that the session closed positive on inflow into large-cap stocks, especially following their recent impressive earnings reports. The upward momentum on the NSE comes as traders reacted to earnings news from big-name companies like MTNN, Okomu Oil, Zenith Bank, and others like Vitafoam and UACN.
The major sectorial indexes ended the period under review mixed, with three of the five firmly in positive territories, while two closed lower.
Crude oil prices at the international market gained 23% during the week under review as the global lockdown is gradually being eased as manufacturing companies reopen in the midst of the production cut agreement being implemented. This is expected to continue if only incidences of new COVID-19 cases do not balloon. Already, the pandemic has brought the world’s economy to its feet, in the aftermath of lockdowns and border closures that have negatively impacted company earnings as will be seen in the coming quarters. It is not only the corporate score-cards that will feel the impact, as government earnings shrink and they resort to one form of debt or the other to meet maturing obligations.

Movement Of NSEASI
It was four trading sessions of bull-run, as the NSEASI opened the week’s trading on a positive flat note with a marginal gain of 0.07% on mixed sentiments, which was sustained on Tuesday with increased buying interests in banking and large-cap stocks that pushed the composite index up by 0.49%. This continued at the midweek and also on Thursday, rallying by 0.62% and 0.67% respectively, leaving the week’s total gain at 1.87%, recovering from the previous week’s 1.41% loss.
Specifically, the composite index gained 421.63 basis points, after starting the week at 22,599.38ps, within which it touched an intra-week high of 23,045.44bps and low of 22,584.64bps on strong sentiments and buying pressure as players positioned, in the midst of corporate earnings inflow and economic uncertainties. The index closed higher at 23,021.01ps, compared to previous week’s close after to break out the 23,000 psychological level, just as market capitalization gained N221.05bn, closing at N11.997tr from the previous N11.78tr, representing a 1.87% rise. This was despite the 25 kobo adjustment in the share price of Union Bank of Nigeria for dividend recommended by its directors.
During the week, 22 companies released their Q1 2020 unaudited results. They are Fidelity Bank, Zenith Bank, Seplat, Julius Berger, Okomu Oil, MTNN, Law Union, UBN, BOC GAS, PZ, FCMB, International Breweries, Guinness Nigeria, NASCON, Vitafoam, Custodian Investment, and others. The numbers came mixed, with only a few posting impressive results, while Okomu Oil Palm announced a final dividend of 200 kobo, with Julius Berger revising its payout to N2.00 from N2.75 proposed earlier, in addition to a bonus issue of one new share for every five held.
The gainers’ table for the period was dominated by low and medium cap stocks, as buying interests and positive sentiments reflected in market breadth with advancers outpacing decliners in the ratio of 28:20. This was notwithstanding the fact that the impetus behind the week’s performance was seriously weak, as the Money Flow Index fell to 14.37bps from 16.31bps in the previous week.
The weekly MACD is bearish but looking up with ‘buy’ sentiments as confirmed by Investdata’s Sentiment Report for the week, showing 95% ‘buy’ volume and sell position of 5%, with the transaction volume index at 0.65.

Mixed Sectoral Indices
Performance across the sectors was largely bullish during the week, except for the NSE Consumer and Industrial Goods indexes that closed 1.42% and 0.47% lower respectively, while NSE Banking index led the advancers after gaining 3.83%; followed by the NSE Oil/Gas index’s 1.70%, ahead of the NSE Insurance that rallied by 1.27%.
Transaction in terms of volume and value were down by 15.83% and 29.26% respectively as investors traded 1.01bn shares worth N9.89bn from the previous week 1.2bn units valued at N13.98bn. The week’s volume was boosted by trades in financial services stocks, especially FBNH, UBA and Access Bank.
The best-performing stocks in the week were ARDOVA (former Forte Oil) and Lasaco Assurance, which gained 20.94% and 12.50% respectively, closing at N11.55 and N0.27 per share on market forces. On the flip side, Nigerian Breweries and Transcorp lost 13.04% and 10.81% respectively, closing at N30 and N0.66 per share on profit-taking and market forces.

Market Outlook
In the new week, we expect a mixed trend on profit booking as technically revealed by the short-term overbought and double tops formation of the candlestick at the cup and handle chart pattern of the NSE action. Also, the possibility of continued funds inflow to the market in the new month is high due to the number of blue-chip companies have announced their qualification dates and AGMs, as market players digest the score-cards released in the previous month to reposition their portfolios. Investors also should look out for developments regarding the implementation of the Central Bank of Nigeria’s funding plan for small and medium scale businesses.
Already, we notice that investors are taking the position in healthcare and other defensive stocks that are likely to survive this meltdown, following which there is increased transactions in them, even as global markets continue on the recovery path already, as lockdowns are gradually being relaxed.
Also, do not forget to identify and play defensive stocks among the many fundamentally sound companies that remained depressed, making them attractive for bargain hunting by market players. This has also resulted in significant improvements in Dividend Yields of stocks, even as we note the fact that fund managers who held cash before now, may have to rethink the strategy and go for value stocks with high upside potentials.
While discerning investors should take advantage of the current low stocks valuation to position for the medium to long-term, it is noteworthy that the Nigerian equity market is selling at a discount and therefore offers high upside potential.
On a bargain-hunting motive supporting positive performance, especially with many fundamentally sound stocks remaining underpriced. With a dividend yield of major blue-chips continuing to look attractive in recent weeks, we expect speculative trading to shape the market’s direction, despite the seeming mixed outlook.
To position for the short to long-term, this is why investors should target fundamentally sound, dividend-paying stocks, for possible capital appreciation in the coming months. Also, traders and investors need to change their strategies, because of the NSE’s pricing methodology, the CBN directives, and their impact on the economy in the nearest future.
Meanwhile, the home study packs of our Invest 2020 Opportunities and Trade Ideas Summit, containing different Stocks for various investment objectives in 2020 and beyond are available. To obtain your pack send ‘Yes’ or ‘Stock’ to 08028164085, 08032055467, 08111811223 now.