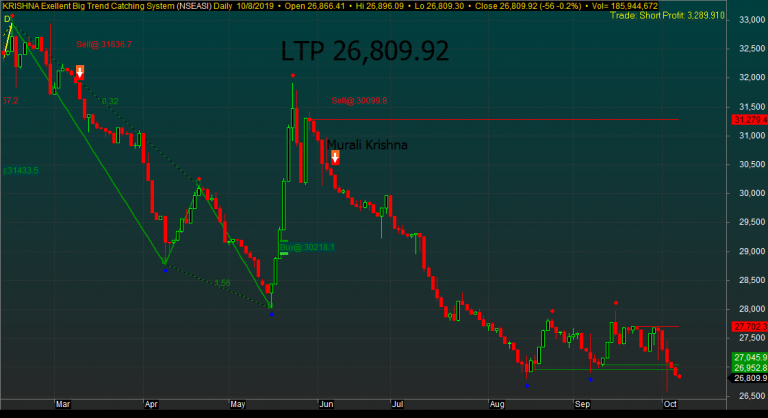 Market Update for October 8
The Nigerian Stock Exchange (NSE) continued to downtrend on Tuesday as its benchmark All-Share index extended its sixth trading session of back-to-back losses on negative sentiments and selloffs as revealed by trade patterns and Investdata’s sentiment report. However, the loss momentum was seemingly slower in pace.
We note that the news of President Muhammadu Buhari presenting the 2020 Appropriation Bill, showing that with a size of N10.33tr, the Federal Government’s intends to spend 7% more than it did in 2019, to a joint session of the National Assembly was not enough to trigger investors buying interest on Tuesday, as selling pressure persisted (READ MORE).
Investdata notes the resolve by the National Assembly to pass the budget in December, thereby stabilizing the countries budget cycle by returning to the January-December fiscal year (READ MORE). We are also not unaware, just as the market, that Nigeria’s annual budget has seen become a mere ritual with scant impact on an economy that needs help to stop performing below its potential and start translating to prosperity for Nigerians. It is no news that the 2019 budget has hardly had any positive impact on the economy as at the beginning of the last quarter (October to December) 2019 when just less than 25% of the capital budget has been disbursed to finance projects captured therein. The total amount released so far for capital expenditure is N264bn, an amount the President assured while presenting the 2020 Appropriation Bill, will jump to N648bn before December 31, 2019.
These are part of the factors and government economic policies that have worsened the hardship faced daily by Nigerians while keeping foreign investors away from the real sector and the capital market.
These, Investdata believes, are among key issues hindering the country’s potential for fast-paced economic recovery. The depressed private consumption and investors’ wait-and-see attitude kept economic growth in the first half of the year below 2%, a rate significantly below population growth. This is likely to continue with the effect of multiple taxes on businesses and Nigerians. These and many more, we expect will feature as the President meets members of his newly constituted Economic Advisory Council (EAC), chaired by Prof. Adedoyin Salami. Some have however argued that the meeting is similar to putting the cart before the horse, since the erudite economist should have been allowed to have a say in the budget, before Tuesday’s presentation to the NASS, besides giving their own opinion of Nigeria’s economic direction and at what speed it should travel for the desired recovery to be attained quickly.
Meanwhile, the NSE’s benchmark index started the day on a slightly upside direction but changed direction between mid-morning to midday on selloffs in MTN Nigeria and Dangote Flour. This situation lingered throughout the afternoon session, with the index touching intraday low of 26,809.30 basis points, from its high of 26,896.09bps. The index, however, inched up marginally at the last minutes, closing at 26,809.92bps on a low traded volume that confirmed the wait-and-see attitude of investors and traders for 2019Q3 company scorecards, even as sectoral indexes resisted further decline.
Market technicals on Tuesday remained negative and mixed, with higher traded volume than the previous day in the midst of negative market breadth and high selling pressure. This was revealed by Investdata sentiment reports showing a sell position of 99% and a ‘buy’ volume of 1% with a transaction volume index of 0.90. Also, the daily time frame- MACD remained bearish, while the Money flow index was relatively weak and flat on a sideways range.

Index and Market Cap
At the end of Tuesday trading, the composite NSEASI shed 56.49bps, closing at 26,809.92bps from its opening point of 26,866.41bps, representing a 0.21% decline, just as market capitalization fell by N27.49bn, closing at N13.05tr, from its opening value of N13.08tr, which also presented 0.21% value loss at the close of the session.
Attention: If you have not signed up for Investdata buy and sell signal setup, don’t delay. We have just added another risk management feature and new stocks of most revered traders and investors in corporate Nigeria to our watchlist. These stocks are with double potentials. To become a member, send ‘YES’ or ‘STOCKS’ to the phone numbers below. Take advantage of this service to buy right and sell right ahead of Q3 earnings reports portfolio reshuffling and repositioning before the government economic advisory team starts rolling out their plans or advises to stimulate and re-track the economy again.
The day decline resulted from selloffs and profit booking in stocks like MTNN, Dangote Flour, Dangote Sugar, UBA, UACN and Wema Bank among others. This impacted negatively on the NSE’s Year-to-Date loss, which heightened to 14.74%, while YTD market capitalization gain reduced to N1.25tr, representing 11.80% improvement over the year’s opening level of N11.72tr.

Bullish Sector Indices
All the sectoral performance indexes were largely bullish during the session, except for the NSE Consumer Goods index that closed lower at 0.09%, while NSE Oil/Gas index led the advancers, after gaining 1.04%, followed by the NSE Insurance and Banking indexes at 0.06% and 0.05% respectively, just as the NSE Industrial goods close flat.
Market breadth was negative as decliners outnumbered advancers in the ratio of 14:12; while market activities in volume and value rose by 22.56% and 68.66% respectively to 185.95m shares worth N2.54bn; from previous day’s 151.72m units valued at N1.5bn. The day’s volume was driven by transactions in Zenith Bank, FCMB, Guaranty Trust Bank, FBN Holdings and UBA.
Nascon Allied and NPF Microfinance were the best-performing stocks for the day, after gaining 10% and 9.09% respectively to close at N14.85 and N1.20 each, on low price attraction and earnings expectations respectively. On the flip side, Champion and Courtville Business Solutions lost 9.37% and 9.09% respectively, closing at N1.04 and N0.22 on selloff and profit-taking.

Market Outlook
We expect the mixed trend and patterns to continue on reducing selloffs, as bargain hunters took advantage of the pullback to position ahead of quarterly scorecards, especially now that the NSEASI recently tested a new low and rebounded on that same day, a good sign of imminent reversal if supported by positive sentiments. However, let the interplay of market forces determine direction.
Discerning investors should latch onto this, meanwhile, as a way of averaging down and recouping their investment immediately a recovery stage sets in, helped by economic policies, when things start to change gradually. In the process, equity prices will be influenced positively, while investors watch for sectors like insurance, banking, Industrial Goods, services, as well as oil/gas that have become defensive in recent times and could go bullish in no distant time.
Furthermore, we note that all eyes are on the newly appointed economic advisory team to settle down quickly and begin churning out policies capable of turning things around.