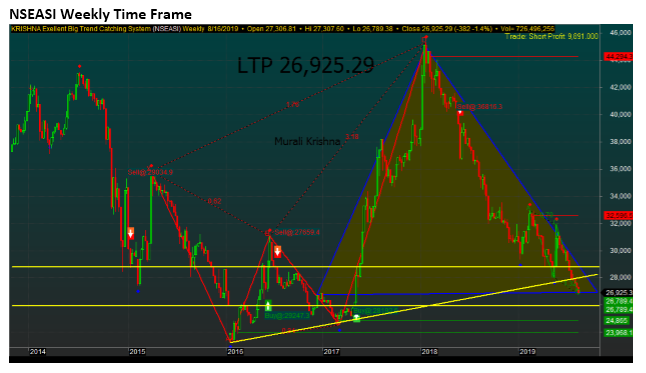 Market Update for the week ended August 16 and Outlook for 19-23
It was a disappointing and short trading week, with stocks traded on the Nigerian Stock Exchange (NSE) seemingly attempting to make all of the losses they would have on Monday and Tuesday, which the Federal Government declared as public holidays to mark the Muslim festival. The first trading session of the week (Wednesday), saw more medium and high cap stocks trading at their new 52-week, five and 10-year lows, as a result of which the benchmark NSE All-Share index traded below the 27,000 psychological line.
Last week also was three straight trading sessions of bear-run which extended the seventh consecutive week of decline by the benchmark index as it heads for its two-year lowest, after breaking down another strong support level to test a new low of 26,789.38 basis points. During the week also, the NSEASI touched an intra-week high of 27,307.60bps on a low traded volume.
This left the market’s year-to-date loss at 14.33%, due to the persistent selloffs by investors and traders, propelled by reasons ranging from the weakening domestic economy and political uncertainties. Add this to external influences like the low bond yields in the international markets, which signal a looming recession after about four developed economies have recorded slow growth in their Gross Domestic Products (GDP) that also means any further slide in their economies will confirm their entry into a full-blown recession. Meanwhile, the trade dispute between U.S and China, two of the world’s largest economies continues to linger as they test their strength at the detriment of the rest of the global space.
Back home, despite the recent seeming positive economic data such as the July Purchasing Managers Index (PMI) at 57. 6 points and 11.08% July inflation rate which came as expected, due to the sustained intervention in the foreign exchange market by the Central Bank of Nigeria (CBN), just as the harvest season strengthened supply, pushing prices down.
Note that Nigeria’s Q1 GDP, at 2.01%, represented a decline from 2.38% in the Q4 2018 level, even as corporate earnings for half-year on the NSE have already given an insight into how the economy performed and what, therefore, the nation’s Q2 GDP data would look like. Another concern among analysts is the country’s external reserves that hit a two-month low at $44.28bn as a result of the oscillating oil price, as it swings below the 2019 budget benchmark, putting the entire economy at risk of further underperforming. However, there is nothing yet to suggest that the fiscal authorities have come to a full grasp of the troubled times ahead, given the absence of any significant sign that the issue is being addressed.

Movement Of NSEASI
It was a short trading week that opened on a negative note as the benchmark index lost 0.84% Wednesday, on resumed panic selloffs across all classes of stocks, due to the looming global recession and at a day after President Muhammadu Buhari’s statement directing the CBN not to sell forex to food importers, which attract wide criticisms. This trend was sustained on Thursday and Friday when NSE index shed 0.13% and 0.43% respectively, on the continued selling pressure, bringing the week’s total loss to 1.40%, compared to the previous full week’s 1.17% drop.
The aggressive selloffs among the medium and highly capitalized stocks during the period reflected on the market breadth which stayed negative, with decliners outnumbering advancers in the ratio of 34:15. This was despite the seeming rebound in all interim dividend-paying stocks, except Stanbic IBTC, which therefore joined others like Okomu Oil, UACN, Oando, and Unilever. Others include Flour Mills, Nestle, Lasaco, Fidelity Bank, Law Union Insurance, Ecobank Transnational Incorporated, FBN Holdings and Total Nigeria, that hit their new 52 weeks low in the week under review, just as Dangote Flour and BOC Gas were the only two companies that made new 52-week high in the entire market.
The advancers table for the period, as usual, was dominated by low cap stocks and few of interim dividend-paying companies, while high cap stocks topped the losers’ chart on negative sentiment and prevailing low liquidity.
The energy behind the week’s performance was weak, despite inching up as shown by Money Flow Index at 14.10 basis points, compared to 13.57bps in the previous week, indicating that funds entered few stocks in the midst of indecision among many traders and investors. Also, sentiments remained negative with a sell position at 74%, while ‘buy’ volume was 26% on a transaction volume index of 0.45.

NSEASI Weekly Time Frame
The index action continued to pull back on a bearish trend and negative outlook, as volume traded remained low due to the dicey investment climate.
Recall that the Nigerian stock market was in the years 2014, 2015 and 2016 unpredictable as economic and political uncertainties kept it in red for all three years, even as many investors and traders in the right stocks recovered earlier as the market rebounded in 2017 on a massive rally, while others missed out. So let us keep our gaze on the global and domestic happenings by engaging in stage-by-stage position taking in fundamentally sound stocks.
The current chart pattern of the NSEASI remains mixed, as the NSEASI continues to trade on the lower band of the Bollinger and below its 20-Day Moving Average, just as Relative Strength Index reads ‘oversold’ at 28.26. But then, Money flow at 14.10 points remains weak.

Bearish Sectoral Indices
All the sectoral and other indices closed lower at the end of last week, except for the NSE premium index that ended the week 0.64% higher, while the NSE Consumer Goods index led the decliners, after shedding 6.6%, followed by the NSE Oil/Gas with 1.9%; while the NSE Industrial, Banking and Insurance indices lost 1.18%, 1.15%, and 0.69% respectively.
Transaction activities for the period were down, as volume and value traded suffered 32.49% and 12.09% decline respectively as 726.61m shares worth changed hands for N10.46bn from the previous week 1.08bn units valued at N12.01bn.
During the week, the share price of Rak Unity Petroleum Plc and Flour Mills Nigeria were adjusted for a dividend of 10 kobo and N1.20 respectively, just as Guaranty Trust Bank released its audited half-year result, showing that gross earnings and bottom line were flat. The directors however declared 30 kobo interim dividend per share for shareholders (READ MORE).
BOC Gas and Union Diagnostic were the best-performing stocks for the week, after topping the advancers’ chart with 9.87% and 9.09% gains respectively to close at N6.12 and N0.24 per share on market forces and sentiment. On the flip side, Rak Unity Petroleum and UACN shed 25% and 18.18% respectively, closing at N1.39 and N0.39, on selloffs and profit-taking.

Market Outlook
We expect a mixed performance to continue as many unknowns that have the potential of fueling the ongoing volatility ahead of Q2 GDP data, developments in the fixed income market, the new cabinet, global economic indices and inflows when the 2019 budget is implemented. However, discerning investors should take advantage of low valuation to buy into interim dividend stocks and other undervalued equities that have strong potential to rebound with the general market.
Also, take into consideration the expected economic reforms as government announces its much-awaited new cabinet, just as plans by the CBN to reduce banks’ participation in government securities is expected to boost private-sector lending to drive economic activities and investment.
Selloffs may persist in highly capitalized stocks due to portfolio restructuring. Hence, overall market performance to remain mixed amidst positive sentiments and negative breadth.
Market players should maintain a cautious outlook due to low confidence, liquidity and the wait for major economic triggers. Hence, we advise investors to trade cautiously in the short-term, with their gaze fixed on blue-chip stocks that are selling more than 40% below their 52 weeks high. As we look out for a positive catalyst to drive market recovery.
That notwithstanding, we would not overlook the possibility of a bargain-hunting motive supporting positive performance, especially with many fundamentally sound stocks remaining underpriced. With the prices of major blue chips continuing to drop in recent weeks, we expect speculative trading to shape the market’s direction this week, despite the seeming negative outlook.