Key Financial Tickers
• This repot dwells on the full year financial performance for the year ended December 31, 2017. However, key financial indices released for the first three months of 2018 were equally considered to establish consistency and gauge the financial health of the company.
• The last cash dividend by the board after some years of no dividend was N0.02 per share.
• The closure and qualification date for the said dividend is June 14 – 20, 2018 (both days inclusive)
• June 28, 2018 is the payment date while the Annual General Meeting holds at Primal Hotel Ibadan, on Wednesday the June 27, 2018
• During the full year 2017 performance, the company reported Accumulated Losses of N1.079bn and Total Comprehensive Income of N1.262 billion. Since this figure is almost canceling out, it announced 2k cash dividend which amounted to N600m.
• In the 2018Q1 performance report, the company reported a N509.011m as Accumulated losses, being the remainder of the amount needed to settle the dividend for the year.
• Outstandingly, N835.158 million was reported as the Total Comprehensive Income for the period.
• We are of the opinion that proper management of the firm’s financials will move it to profit at the end of the ongoing financial year.
• The company reported positive earnings as against the loss position unveiled in 2016. 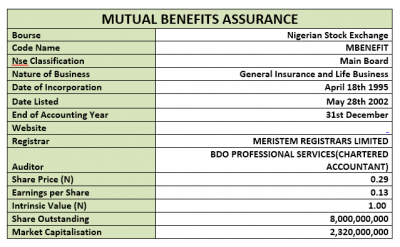 Attraction
• Mutual Benefits Assurance Plc is engaged in general and life insurance underwriting, risk management and provision of financial services.
• The Company operates through four segments: General business, which covers:
 protection of customer assets and indemnification of other parties;
 Life business- protection of customers against risk of premature death, disability, critical illness and other accidents
 Real Estate- undertaking real estate development projects with the aim of outright sale or lease of the properties to meet the needs of individual and corporate bodies
 Microfinance Banking, which includes provision of retail and microfinance banking services at the community level

Corporate Figures
• Unlike the previous year where Gross Premium Written (GPW) dropped against comparable year, the company achieved a growth of 16% in Gross Premium in 2016. GPW currently stands at N14.037 billion as against the N12.143 billion in 2016.
• Similarly Net Premium appreciated marginally by 0.12% to N11.467 billion compared to the N10.271 billion last year. Both Net Claim and Total Underwriting expenses inched north by 0.54% and 0.24% respectively
• Underwriting Profit shifted below last financial year by 0.12%
• Total Investment Income and Insurance Profit equally managed to stand above what was reported in 2016 by 0.63% and 0.03% respectively. Nevertheless, it could be concluded that the saving grace for the year’s profit is the other investments through the use of the float.
• See below for comparison of other corporate earnings. 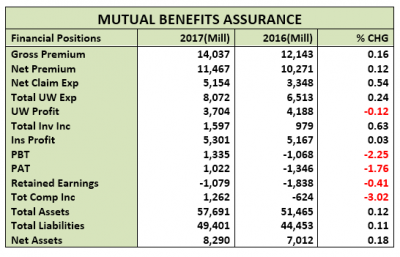 Liquidity/Risk Ratios
• The company currently runs on a high Total Debt-to-Equity ratio of 82.20%, which is almost double the industry average of 45.44%
• Typical of most listed equities in the insurance sub-sector of the Nigerian equities market, patronage of Mutual Benefit shares is almost zero; agreeably amongst the lowest in the sector given the large difference between its industryl average and beta value.

Profitability Ratios
• The amount posted as net Profit is same as 9.51% of the reported Gross Premium Written
• Profit Margin is 7.28% of Gross Premium Written
• Return on Equity is fairly attractive at 15.23%, which was achieved because of the low share outstanding.
• Return on Average Assets is 2.19% against the 1.21% achieved in 2016
• In conclusion, we maintain a lower rating of Mutual Benefit profitability. We are of the opinion that it could aggressively dispense the available resources to achieve more profitable.

Efficiency Ratios
• Definitely the management of Mutual Benefit needs to be more aggressive in its market and risk management approach especially when its efficiency ratios are put into consideration. For example;
• Gross Premium to Total Assets is 24.33%, 3.12% above what was achieved in 2016
• The company uses 6.96x debt (lower than the 7.34x in 2016) to finance assets during the 2017 financial year.
• Gross Premium replicated Equity 1.69x lower that the 1.73x achieved in 2016, just as
• Underwriting Profit also reduced to 26.39% from the 34.49% estimated in 2016

Investment Ratios
• Moving from the loss position reported in 2016, the amount earned per share of Mutual Benefits is 13k as against the Loss after Tax of 17k
• In line with the new rule of the Nigerian Stock Exchange, the share price of Mutual Benefits dropped freely to 29k as at the released of the 2017 financials
• As a result of this, the current earnings achieved a higher yield of 44.07%
• PE/Ratio marginally dropped from the previous 2.97x estimate to 2.27x, confirming low investors patronage/interest in its shares.
• Nevertheless, going by the Price to Book Value of Mutual Benefit, one will safely conclude that each share is grossly underpriced. Please note that the estimated Book Value per share is N1.04 as against the 29k it is selling.
• Outstandingly, the Insurance Margin of 44.07% confirms the financial health of Mutual Benefits, in our opinion. We note also that insurers that can withstand underwriting losses with profit made from investments of premium income are more financially secure

Valuation
• Considering the current state of the company and the fact that it has no dividend history through which growth rate could be established and since the company financials is just beginning to look up, we opted to value its shares slightly below the estimated Book Value. Hence, we placed each unit of Mutual Benefits at N1.00. 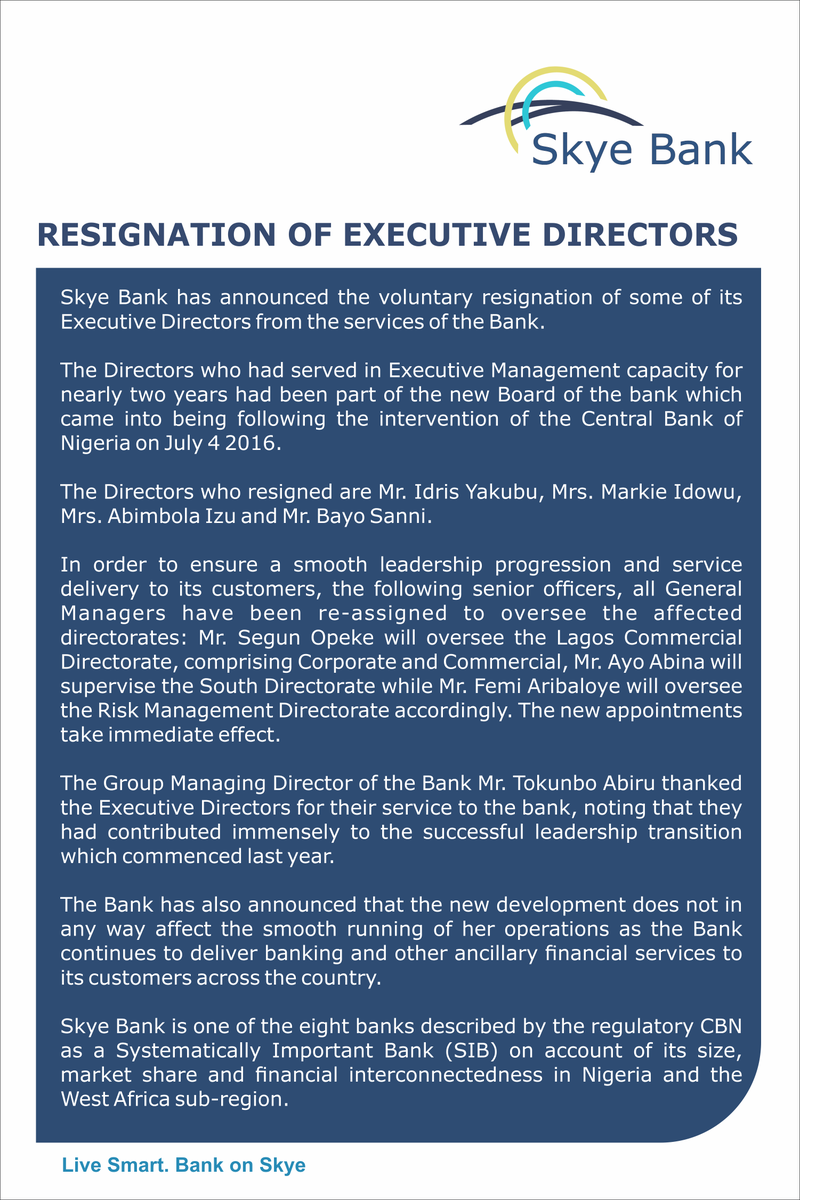 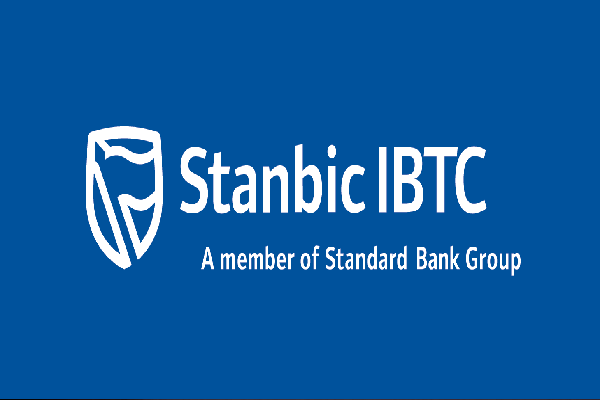