Introduction
• This report observes the full-year unaudited financial performance of the Nigerian Aviation Handling Company (NAHCO) for the year ended 31st December 2019 and compares it with the audited numbers for the corresponding period of 2018, to establish growth and make projections accordingly.
• Since this is only an unaudited account, the dividend proposition will come with the audited financials around April. Nevertheless, over the years, the management of Nahco has maintained a dividend payment policy of over 20 kobo. As a result, even when the company’s earnings dropped in 2018, shareholders received 25 kobo per share.
• In other words, since it recorded a great feat at the end of the 2019 financial year, with Earnings Per Share of 64 kobo, we expect the board to pay no less than the 25 kobo as cash dividend to shareholders for the period under consideration.
• As of the end of 2019, the company had zero long-term loans and borrowings, thereby reducing its gearing ratio, while enhancing its valuation.
• In our opinion, the company is reflecting the outcome of several regulations in the aviation sector of the economy. 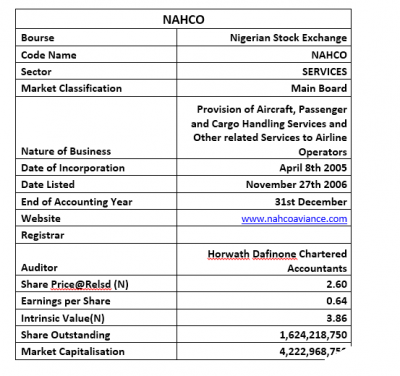 Statement of Comprehensive Income
• The N10.14 billion turnover reported for the year is a mild improvement over the N9.82 billion reported at the end of 2018 full-year performance.
• The cost of Sales grew above that of the corresponding year by 162.48%, a rate, in our opinion, is quite high.
• The estimated Operating Profit through the year is valued at N1.32 billion, compared to the N502.35 million achieved in 2018.
• Operating Expenses is estimated at N2.53 billion, from N2.93 billion in the corresponding year.
• Finance Cost for the period fell by 24.62% to N127.98 million, as against N169.77 million in the preceding year.
• Thus, Profit before Tax was estimated at N1.34 billion, versus N503.23 million at the end of the 2018 financial year. Note that this is the same as a 166.50% improvement over the 2018 performance.
• After taking care of Tax Expenses for the year, the management of Nahco reported a net profit of N1.04 billion, which is 430.76% better than the N196.79 billion used through the 2018 financial year. 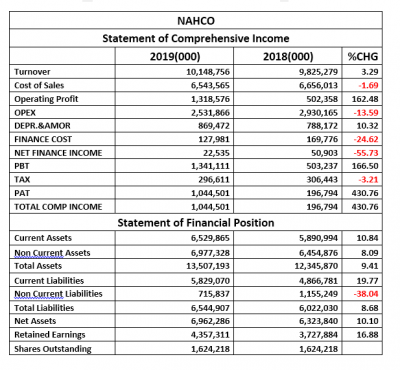 Financial Strength
• The amount reported as Total Liabilities is the same as 48% of the Total Assets for the year. In other words, the Debt Ratio is 0.48x, which is 0.66% below the 0.49x in the corresponding period.
• Total Debt to Equity Ratio is currently estimated at 0.94x against 0.95x in the corresponding year, this implies that the Total Debt Value for the year can replicate Equity 0.94x, implying that equity holders’ strength in the company has not really changed within the years.
• Equity Ratio is also valued at 0.52x versus 0.51x, that Equity is the same as 52% of the Total Assets Value for the year, barely the same as in the corresponding year.
• Going by the current estimated beta value, the shares of Nahco can be said to be less liquid as its beta value currently stands below unity.

Profitability Ratio
• EBITDA Margin is Currently estimated at 12.99%, representing 154.11% improvement over the 5.11% estimate at the end of the 2018 financial year.
• Pre-Tax Margin stood at 13.21%, as against 5.12% of 2018, with the difference between both ratios the same as 158.00% in the positive territory.
• Cost of Sales is estimated at 64.48% of the Turnover or 4.82% below the 67.74% reported in the corresponding year. Note that this signifies the management’s attempt to maintain direct cost through the year.
• The company achieved a fair return on equity of 15.00%, up from the previously estimated 3.11%.
• Similarly, the estimated Return on Average Assets is quite impressive at 7.73%, up from 1.59% in the corresponding year.

Efficiency Ratio
• Operating Expenses is estimated at 24.95% of the Turnover Value, a marginal improvement in the management efficiency when compared to the 29.82% estimated in 2018.
• Turnover Value is 75.14% to the Total Assets Value, the ratio is 5.59% below the 79.58% estimated from 2018 figures.
• Working Capital Turnover improved to 14.48% from the previously estimated 9.59%.
• Working Capital Ratio, within the two compared years, stood above unity to confirm the ability to settle its current liabilities with current assets as and when due through the season.

Investment Ratios
• Nahco shares were priced down by 22.39% within the two periods compared in this report as shown in the table below
• The amount earned per unit of Nahco is currently estimated at N0.64, as against the N0.12 earned in the corresponding year.
• P/E-Ratio increased to 4.04x versus 27.65x, confirming a near recouping period in the shares of Nahco.
• The above mentioned EPS is a 24.73% yield over the price of Nahco shares on the floor of the exchange as of the time the result was made available to the investing public.
• We have established that each unit of Nahco is worth N4.29 in its book, far above the market price when the result was released.
• See the table below for detailed investment analysis.

Valuation
• Our blend of valuation tools considered a situation where the management of Nahco offered the investors a cash dividend of between N0.25 and N0.30 for the 2019 financial year. Thus, we valued each unit of Nahco for N3.86, and we have therefore rated the stock a Hold, considering the closeness between the market price and our valuation.