Key Financial Tickers
• This report observed both the full year financial performance indices of the company, formerly known as Nigerian Aviation Handling Co. (NAHCO) for the year ended December 2017 and first quarter 2018 statistics
• As at the end of the 2017 activities, the following own more than 5% of the company’s shares:
 Rosehill Group Ltd (9.52%)
 Sycor Private Investment Limited (8.93%)
 Air France (5.81%)
 Lufthansa Commercial Holding GmBH (6.00%)
 AWHUA Resources Limited (7.13%)
• Finance cost was observed to have dropped in the current year by 60.92% to N213.06 million as against the N545.29 million of 2016
• Finance costs comprised of interest expenses on borrowings. Effective June 2016, Tranche 2 bond was restructured to enable half-yearly liquidation of principal and interest renegotiated to 15.75% per annum. 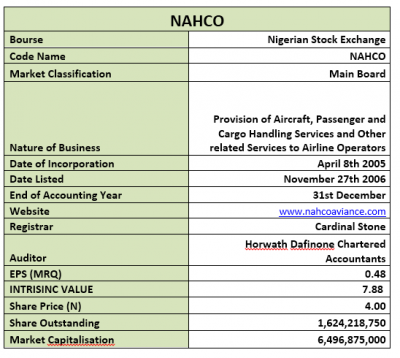 Corporate Figures
• The Turnover value reported for the year ended 31st December, 2017 is mildly below that of comparable year. A total of N7.926 billion was reported as Turnover value, which is 0.39% below the N2.930 billion reported in 2016.
• Due to lower income from its fixed income investment and higher administrative expenses, compared to the previous year’s, while operating profit stood at 46.92% below the reported amount in 2016
• Profit before Tax also stemmed below that of 2016 at N600 million, as against N909 million earned in 2016
• Nevertheless, the amount reported as Profit for the year stood at 33.59% above last year’s profit, with N775 million reported as profit, as against the N580 million of 2016
• Retained Earnings improved to N4.171 billion, compared to the N3.748 billion in 2016
• Non-Current Assets notched 1.21% over the comparable year. Please note that current value is N6.879 billion as against N6.796 billion
• Meanwhile Current Assets stood at 7.79% below that of 2016
• Total Liabilities stood at 12.59% below 2016 liabilities.
• The current value reported as Net Assets is 6.59% above the N6.352 billion posted in 2016 financials. 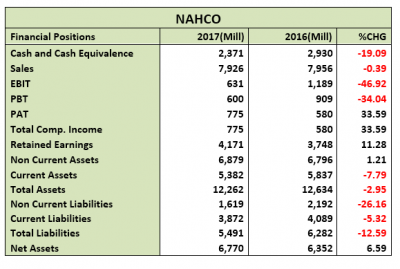 Liquidity/Risk Ratios
• Although the estimated Debt to Equity ratio is below the industry average, the 12.26% estimate is still within acceptable range
• Also, estimated current ratio is above unity at 1.34x as against the industry average of 2.79x. The theoretical implication of this is that the company will be able to swiftly service its current liabilities as and when due
• At 0.71 beta value, Nahco is less patronized by the investing public, and could be said to be less volatile than most industrial peers
• The company’s ability to service its interest-bearing liabilities is tested by checking the interest coverage at 5.57x, far below industry average, implying that the company can service its liabilities 5.57x.
• In our opinion, this should be well managed while much caution is put in place to ensure liabilities are not built without corresponding growth in income

Investment Ratios
• Following same trend as in the earnings, the amount earned per unit of Nacho Aviance (EPS) improved outstandingly by 33.59% from N0.36 to N0.48
• Due to the difference in market price between the two financial years compared in this analysis, the current Earnings Yield stood below estimated yield in the previous year. as shown in the table below, the current yield is 11.94% as against 16.18%
• Price Earnings ratio (PE/Ratio) confirmed marginal investors’ preference for Nahco Aviance’s share as it moved from 6.18x to 8.37x
• Two ratios confirming an underpriced position of each shares of Nahco on the floor of the Exchange are the Price to Book Value (P/BV) and the Book Value (BV). Since P/BV stood below one (1) it implies that each unit is in theory, mildly underpriced. Confirming this further is the estimated BV of N4.17 as against the market price of N4.00 (as at the released of the current full year result). 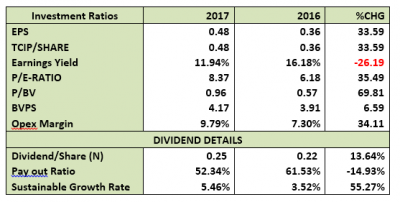 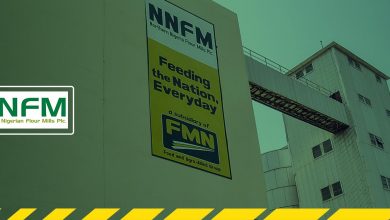