Market Roundup for November
Once again, the Nigerian equity market as well as the economy was trailed by weak performance in the month of November, which was yet another bearish outing that extended the downtrend on the back of dwindling investor confidence and mixed economic fundamentals.
The combination of weak and mixed third quarter earnings, made worse by weak macro-economic indices that confirmed a slowdown reflected in the composite indices of the Nigerian Stock Exchange (NSE) for the month. The sectorial indicators point to stagnation in the economy, with many companies unable to grow their sales revenue in the recent corporate earnings reports, despite all the domestic and foreign borrowing and huge budgets since 2015.
These have not been helped either by the uncertainties now associated with next year’s general elections that has made the market close lower for the month under review, despite resisting decline for more than two weeks. During the period, the benchmark All-Share index side-trended, before giving up to sell pressure, after which it broke down support level to make lower lows on low demand for stocks.
Manufacturing activities in the current year continue has remained low, due to the declining purchasing power of Nigerians and dwindling productivity. This is despite the fact that Purchasing Managers’ Index for the period remained above 50 points, with November data at 57.9 from previous month’s 56.8, according to the Central Bank of Nigeria (CBN).
More specifically, the first three quarterly results of companies listed on the NSE generally reveal mixed performance in revenue among operators in consumer and industrial goods sectors. Most of them came below expectations, reflecting the impact of low economic activities and high cost of living and doing business. Another important factor is the resurgence of inflation. Expectedly, due to the festive period and likely implementation of the new minimum wage in the coming year, inflation is likely to remain within the two digit region.
During the month, there were 21 trading sessions, with the market closing red on 13 of those days and up in eight, continuing a 10-month downtrend that impacted negatively on year-to-date return that stood at a loss position of 19.17%. This is attributable to factors mentioned above and the exit of foreign investors due to the high yield environment in developed markets. This has made the Nigerian stock market rank among the worst performing across Africa and indeed, the globe with many stocks on the exchange suffering huge losses, a situation that has however made many of them highly undervalued, offering high margin of safety for discerning investors.
Meanwhile, in the month of November, the NSE All-Share Index lost a total of 1,592.10 basis points, closing at 30,874.17bps after touching a high of 32,477.99bps and low of 30,545.20 within the period, compared to the 32,466.27 at which it opened. The closing figure represented a 4.90% decline during the month on a strong sell-market position that impacted on stock prices to sustain the downtrend.
Selling pressure of the total transactions for the period was 83%, and buying volume 17% to sustain the bear ascendancy in the last quarter of the year, while volume index for the period stood 0.79. Market capitalization dropped by N581.22bn to close lower at N11.27tr, from N11.85tr, representing a 4.89% value loss. The downtrend continues on lack of economic direction and the much needed positive information to trigger demand.
Transaction volume for the month was up by 10.57% to 5.44bn shares, as against the 4.92bn units recorded in the preceding month, while market breadth for the period was negative with the decliners outnumberingadvancers in the ratio of 65:22 to continue the bear transition, irrespective of attractive entry points and undervalue state of the equity market. 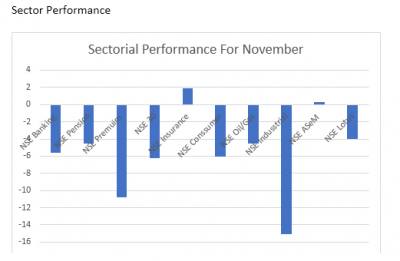 The sectoral indexes performance chart above followed the path of the general market benchmark index, except for the NSE Insurance and NSE ASeM that closed on the up side. The bar chart shows that the NSE Industrial Goods and Premium indices drove the market the most in the month under review, with the former losing 15.05%, as a result of value loss in CCNN, Lafarge Africa, Dangote Cement and others that comprises premium index, while the NSE 30 followed with 6.22%. Next were NSE Consumer good and banking with 6.04% and 5.60 % respectively. The oil/gas index also underperformed the composite NSE All-Share Index during the period, declining 4.56% to reflect the selloff and profit taking in Seplat, 11 plc, Eterna and Oando in that sector, while the NSE Pension and NSE Main-board indices dropped by 4.52% and 3.25% respectively. These, more than ever before, revealed investors’ apathy in blue-chip and dividend-paying stocks, as sentiments remain negative despite thelow Price-To-Earnings ratio attraction.

Best performing stocks for the period under view were Continental Reinsurance, which rallied on the strength of its expansion drive and mild improvement on the numbers, with positive sentiment. It gained 35.14% of its opening price, after the core investor- Continental Investment offered to buy-out minority shareholders. It was followed by healthcare company- GSK, which appreciated by 17.89; ahead of the 14.68% notch by another healthcare service provider- McNichols, while May & Baker closed 11.57% higher in a week its N2.5bn rights offer closed. Also, Chemical &Allied Products and Beta Glass were up by 10.14% and 9.98% respectively. Low, medium and high caps that ranked high among the best performing stock table for the month included: Nahco with 9.09%; Nestle7.61%, Presco 7.06% and AXA Mansard, 6.32%; among others. 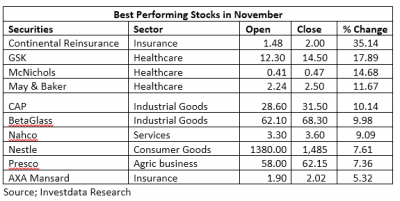 The worst performing stock for the period was Diamond Bank, which shed 53.24% of its opening price, amidst its lingering crisis and reactions to its rumoured acquisition, which has been stridently denied. The crisis of confidence has also not been help by the way its chairman, Oluseyi Bickersteth resigned along with three other non-executive directors- Rotimi Olayiwola Oyekanmi, Mrs. Juliet Anammah and Mrs. Aisha Oyebode resigned. Add this to its weak earnings power that had led to non-payment of dividends for more three years and high Non-performing Loans. It was followed by Eterna, which lost 30.58% also due to mixed numbers and profit taking, as the company prepares to borrow for expansion. The share price of CCNN fell by 27.86%; Ikeja Hotel closed 25.99% lower for the month on serious profit taking, just as Lafarge Africa dropped 25.41% on the back of Q3 red account, that makes the stock more attractive at its trading 10-year low. 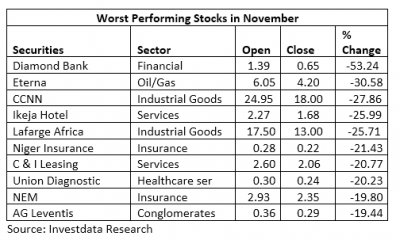 Technical View on Monthly Time Frame
As shown in the opening graph of this piece, the NSE Index action for the month remained in the bearish channel and below the 20 and 50-Day moving average on improved trade volume, while reflecting the selloff and negative sentiment for stock as market and economic fundamentals continued on a path of slowdown that is driving weak momentum and strong volatility. With the improving economic data so far in this last quarter and current trading pattern, ahead of Santa Claus and year-end rally in preparation for full year earnings reporting season in Q1 2019 after the presidential election, market technicals remain negative and mixed. This is likely to reverse into the new month with seasonal changes and low-price attraction ahead of year-end with funds gradually leaving developed market to emerging stock markets. 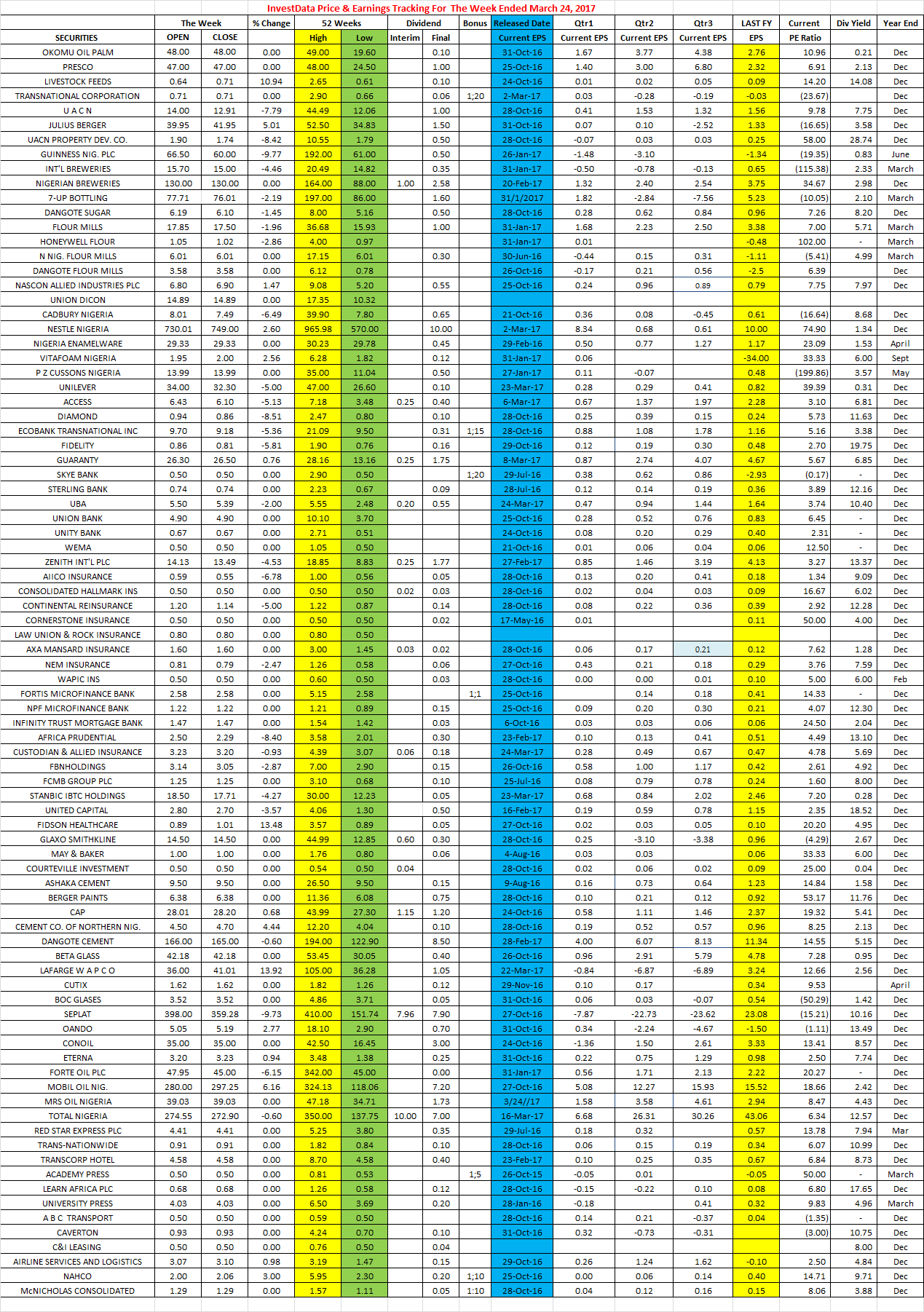 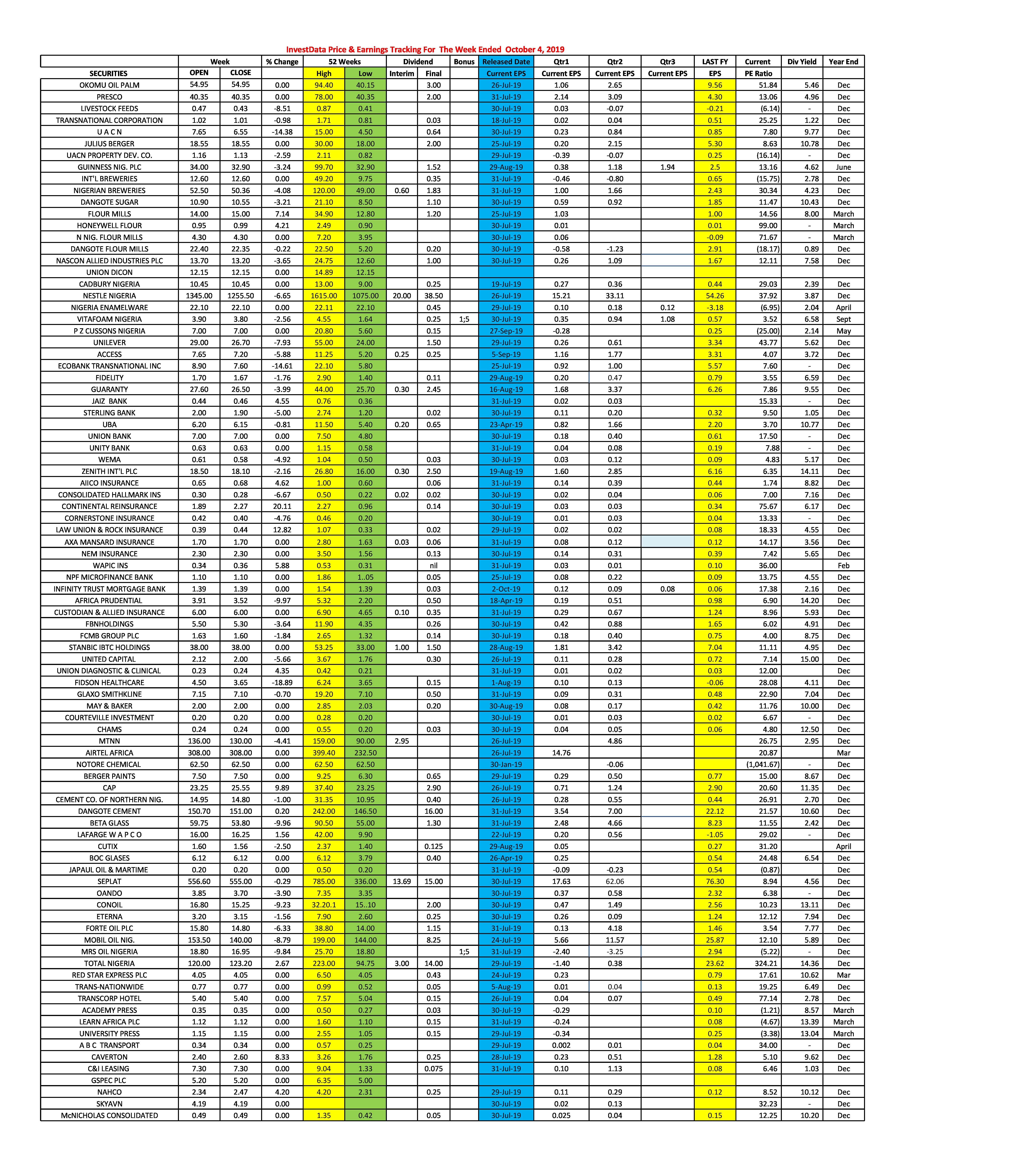 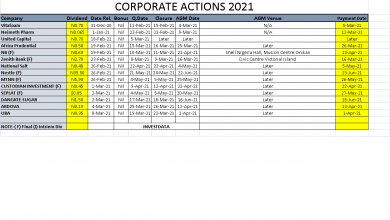