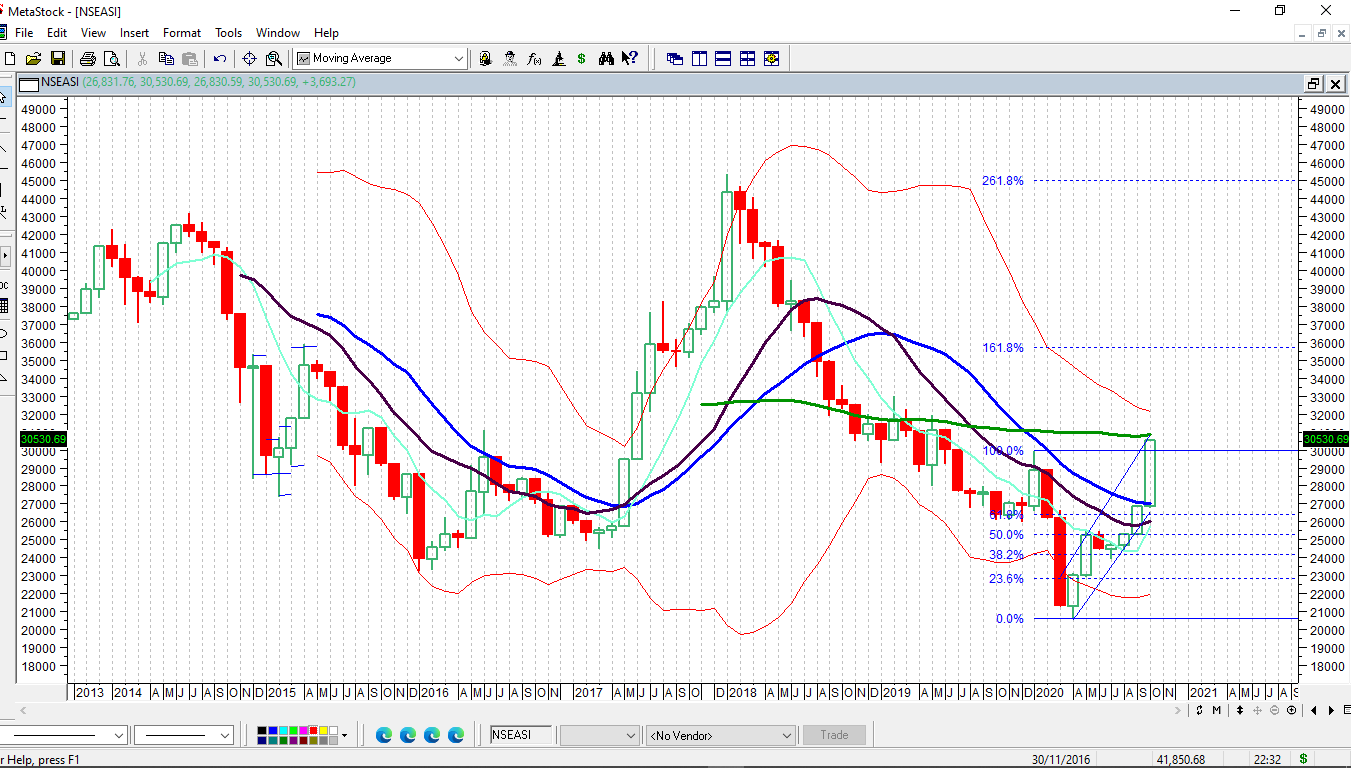 October was a great trading month, as the Nigerian Stock Exchange (NSE) recorded its highest monthly gain since February 2018 with the benchmark index garnering 3,698.93 basis points on inflow of funds searching for higher real returns in a low interest rates regime. For example, due to the prevailing low yields in the fixed income market, the rates for the recently listed FG bond (2022 and 2023) was below 4%, just as that of Treasury Bills crashed further at the last auction to below 1%. Recall that the Nigeria’s inflation rate for the month of September rose to 13.71%, according to data from the National Bureau of Statistics (NBS).

There was also the impact of the better-than-expected Q3 earnings released so far in the midst of a lingering economic downturn resulting from the Coronavirus (COVID-19) pandemic outbreak, and positive buying sentiments among blue-chip and growth stocks.

These triggered buying interests in the equity space, despite its seeming disconnection between the equity market performance and economic realities to sustain four consecutive months of bull-run, as the V-shape market recovery surpassed that of January on a high traded volume and positive breadth.

October, the first month of the last quarter of 2020, ended on a positive note with Friday’s market rally suggesting a trend continuation as gaps get filled ahead of the release of more earnings reports, especially the deposit money banks, and an eventual portfolio reshuffling along sectors and companies’ performance.

The positive close on bullish sentiments in the market was also despite the socio-economic unrest championed by Nigerian youths across the country, codenamed EndSARS to protest th indiscriminate killing and maiming by officials of the Special Anti-Robbery Squad, a unit of the Nigerian Police. The tension reached tipping point, in the aftermath of the looting and wanton destruction of public and private property that followed the shooting and killing of protesters by the officials of the Nigerian Army called by the Lagos State Government to enforce a 24-hour curfew it imposed on Tuesday, October 20, So far, 73 deaths are said to have been recorded from the EndSARS protest, according to reports quoting the Police Inspector-General.

We do know, that stock markets across the globe, as leading indicators of economic activities, are forward-looking, with the current share prices reflecting the future earnings potentials of quoted companies, or profitability, of quoted companies. Given that expectations about profitability, which is directly linked to economic activities, fluctuations in stock prices are thought to show the direction of any economy.

However, the Nigerian equity market has since April rallied on liquidity and sentiments, while ignoring economic fundamental and at the same time pointing to a possible economic recovery as reflected in the resilient quoted company numbers, despite the negative macroeconomic indicators.

The continued uptrend by the composite NSE All-Share index and the mixed corporate earnings of listed companies released so far show that the Nigerian economy is still struggling, leaving th positive trend at the mercy of sustained liquidity inflow. This is a reflection of monetary policy stance which is driving economic activities again through low interest rates.

However, for these low rates to achieve the desired objective, it is time for government to revisit its various polices, while ensuring coordination with those of the monetary authorities so as to check the wanton incidences of policies mismatch that has prevailed for years.

Also, the intervention funds from the government and CBN have not reflected on the economy well enough, as national output remain low due to the unhealthy business environment, with the unresolved bad road networks for the movement of goods and services to the market across the country. The impact of this has been further worsened by the recent hike in electricity tariff and pump price of petrol, further pressuring the cost of goods and services when added to the high cost of other production variables that have almost crippled the manufacturing sector as reflected in the mixed earnings of companies in the real sector.

The positive responses to the mixed numbers as at release dates by investors has pushed many equities to new 52-week highs, confirming the high liquidity and confidence in the market. As noted earlier, the Q3 scorecards of various listed companies have exposed the real state of the economy in Q3, besides giving an insight into what the Q3 GDP will look like when published by the NBS.

The possibility of prices rallying further from here is high, amidst portfolio reshuffling on the strength of the Q3 numbers, just as investors would be assured of reward in the form of dividends when the full-year score-cards begin to flow into the market in the early days of 2021, despite the possibility of dividend cut. It is expected that discerning investors and traders would take advantage of the relative low stock prices, year-end season and cycle to grow their income, ahead of major earnings season in the first quarter of 2021.

In the 20 trading sessions of October, the index recorded gains in 13 sessions and down in seven trading days, raising year-to-date gain to 13.74%, even as we note that the undervalued state of quoted companies, their fundamentals, and the seemingly high dividend yields may attract more inflows to the Nigerian stock market. This is given that many equities are selling above their 52-week and three-year lows, thereby offering higher upside potentials.

Meanwhile, the key performance Index in the month gained a total of 3,698.93 basis points, closing at 30,530.69bps, its high, and a low of 26,830.59bps for the month, compared to the 26,831.76bps at which it opened. This represented a 13.79% growth over the period on strong buying interest that impacted positively on the index and stock prices, pushing them further up to breakout various resistance level and 30,000 psychological line.

Total ‘buy’ volume for the month was 100%, further extending the bull transition in the last quarter, while volume index for the period was 1.45. Market capitalisation rose by N1.74tr, closing at N15.96tr, from N14.02tr, representing a 12.41% appreciation in value. Traded volume for the period was up 50.76%, at 8.97bn shares, as against 5.95bn units recorded in the preceding month. Market breadth for the month was positive with the advancers outnumbering decliners in the ratio of 88:9 to extend the four months up market that was as a result of factors mentioned above.

Performance indexes across the sectors were bullish as the chart below shows that the NSE Consumer Goods and Banking indexes boosted the market the most during the month, outperforming the general market. The NSE Pension index gained a total of 17.53%, driven by price appreciations in dividend paying stocks; the NSE 30 index garnered 14.88%, also faster than the composite NSE All-Share Index during the period. It was followed by the NSE Premium, which chalked 13.99% to reflect the performance of blue-chip and high cap stocks on the exchange, while the NSE Main Board and Industrial Goods indices inched up 13.60% and 11.24% respectively, revealing investors’ positive sentiment and the clear decision among traders, as the market’s Price-To-Earnings Ratio remains low and attractive.

It is also worthy of note that no sectoral index closed in red during the month as the NSE Oil/Gas and Insurance, notched 10.35% and 4.54% on the strength of the fuel hike and the ongoing recapitalization in the insurance sector.

The month’s best-performing stocks were low and medium caps across the banking, consumer goods and oil marketing sectors, led by International Breweries, which gained 88.97% as its directors increased their stake, followed by Eterna’s 87.96%; and the 42.92% notch by FCMB. Sterling Bank climbed 38.28%, on insider buying and positive sentiment for second-tier banks; just as Fidelity Bank, 35.68%; among others.

The worst performing stocks for the period was Royal Exchange Assurance, which lost 14.32%, amidst selloffs and mixed earnings performance in the recent numbers released; Cornerstone Insurance shed 10.77% due to its unimpressive earnings; just as Prestige Assurance declined by 10%; ahead of Consolidated Hallmark Insurance’s 8.11% price decline during the month.

Index action for the month of October revealed an uptrend and a bullish channel that is set to breakout its 50-Day Moving Average on monthly chart with positive sentiment and high traded volume. The market is still trading within the up channel and above the 20-day moving average, despite the high buying interests, the benchmark index has entered overbought region on a weekly and daily time frame to reflect increased inflow of funds that pushed stock prices up in October, which was also the earnings reporting season. With the mixed numbers released, trading patterns and momentum going forward are likely to change amidst portfolio rebalancing and repositioning ahead of year-end and seasonal cycles. Market technicals for the market were positive and this is expected to remain unchanged in the new month.

Volatility is expected to continue in November, even as the outlook remains mixed due to likely price corrections, or pullbacks for a few days due to profit taking and portfolio reshuffling ahead of year-end and 2021 corporate actions. The anticipated correction in the new month will strengthen recovery.

But investors at this point should not be greedy, but let their decisions be guided by their investment goals and exit strategies, even as the healthy inflow of funds into the equity assets due to prevailing low rates in money market is likely to continued even as the market look to the last MPC meeting in the new month.

However, with less than 63days into the year 2021, you need to start planning now because it is either you plan to succeed in 2021 or you don’t decide. Instead, you fold your hands means you are planning to fail. So, this practical summit is first of its kind because a team of experts will be revealing pure practical trade ideas and opportunities in 2021 to consolidate your gains and maximize returns no theory.  That is, what you can apply or implement immediately and start tracking the result by yourself.

February 2, 2023 14
NGXASI Chalk 3.88% In January, But Volatility Ahead Amid Mixed Outlook, Price Corrections