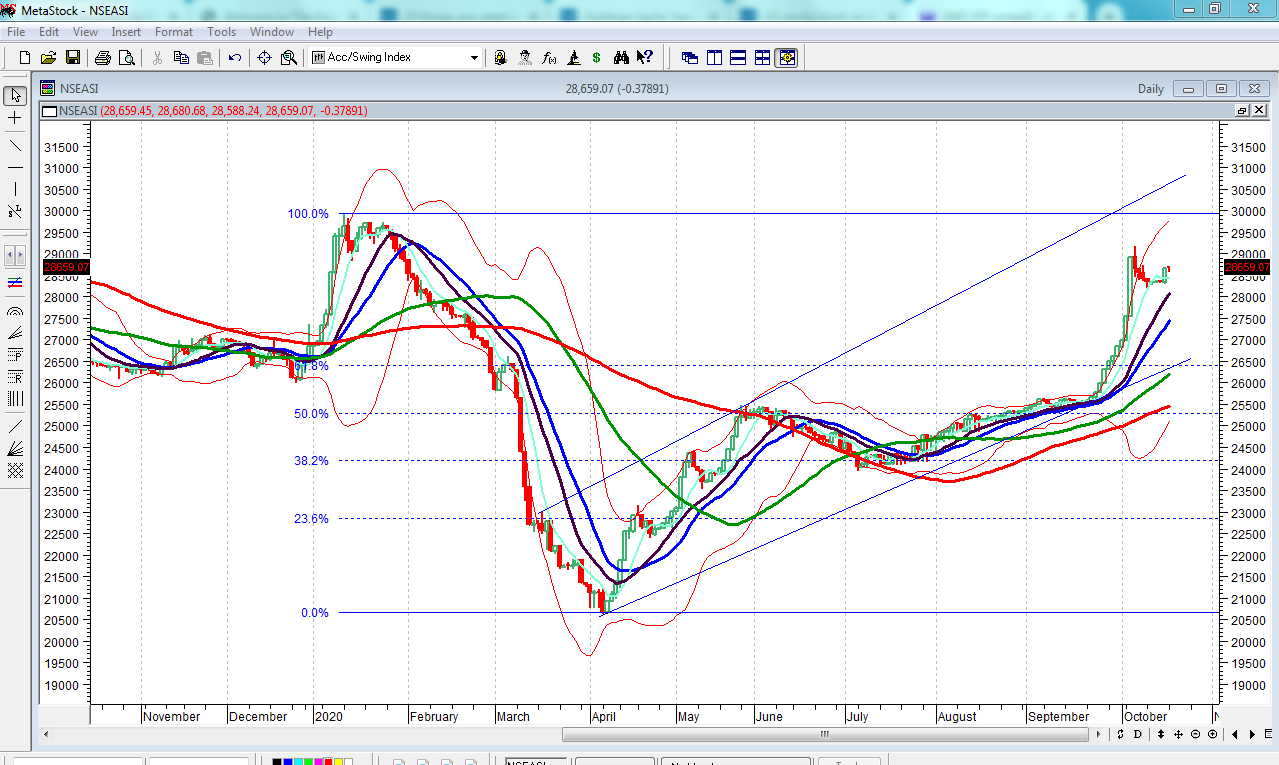 The benchmark index of the Nigerian Stock Exchange on Monday closed flat on mixed sentiments and profit taking as the geopolitical tension caused by the lingering #ENDSARS, #EndPoliceBrutality, #EndBadGovernanceInNigeria protests by the youths entered day 12, shutting down economic activities further in major cities of the nation, thereby further weakening economic recovery prospects. The market’s internal technical indicators had been building up strength after eight trading sessions of pullback and side trending, while awaiting the release of more Q3 earnings reports.

The protesters have refused to being cowed by attacks by thugs, who in some states have used the protest as a cover to loot private properties, even as the protest in Benin resulted in a jailbreak. Already, the Government of Lagos State, Nigeria’s economic capital, on Monday announced a closure of all public primary and post-primary schools to safeguard the lives of the vulnerable children and prevent their being caught in the gridlock on their way to, or from their schools, as the youth take to the roads and streets. The protesters have put together a litany of demands, amidst angst over government’s lackadaisical attitude and longstanding distrust for a political class that has kept them from their lofty aspirations in life.

However, the equity market remains bullish in the short term, as the trend is relying mainly on a few stocks and sectors, with the market entering overbought region again on a daily time frame, while the RSI is reading 82.21 and money flow index, 74.38 points. This indicates a strong momentum behind the trend and positive sentiment, driven by the increasing liquidity flowing into equity assets as a result of the prevailing low yields environment. We must warn that this is not sustainable from a long term perspective. The fixed income market, like Treasury Bills and bonds, is suffering from low interest rates, despite the seeming safety it provides for investors during market downturn.

The expected earnings and increasing inflow of money into the market this week will support a breakout and continuation of recovery, if these protesters suspend their action to give government time to meet their demands.

United Capital released it Q3 numbers after Monday’s trading session, with impressive numbers such as gross earnings of N7.07bn, as against N5.32bn recorded in the corresponding period of 2019, while profit soared to N3.46bn, from N2.75bn. This translated to 58 kobo Earnings Per Share, as against 46 kobo.

Meanwhile, Monday’s trading opened on the upside, before oscillating between mid-morning and midday, after which it slipped by the late afternoon on profit-taking and positioning in expectation of more earnings reports. This pulled the NSE All-Share index to an intraday low of 28,588.24 basis points, from its high of 28,680.68bps, after which the index closed slightly lower than it opened at 28,659.07bps on a low traded volume.

Monday’s market technicals were weak and mixed as volume traded was lower than in the previous session, in the midst of flat breadth and high buying sentiments, as revealed by Investdata’s Sentiment Report showing 77% ‘buy’ volume and 23% sell position.

Total transaction volume index stood at 0.80 points, just as the momentum behind the day’s performance remained strong, while Money Flow Index printed 74.38 points, from the previous day’s 74.46 points, an indication that funds left some stocks as profit taking resurfaced.

Attention: If you have not signed up for Investdata buy and sell signal setup, don’t delay. We have just added another risk management feature and new stocks of most revered traders and investors in corporate Nigeria to our watchlist. These stocks are with double potentials to rally considering their current market prices.

To become a member, send ‘YES’ or ‘STOCKS’ to the phone numbers below. Take advantage of this service to buy right and sell right at the current market recovery ahead of Q3 earnings reporting season portfolio reshuffling and repositioning as we await an economic reform policy to stimulate and re-track the economy again.

The slight pullback recorded on Monday was due to profit booking in Zenith Bank, Access Bank,Lafarge Africa, Cadbury, and May & Baker, which impacted mildly on the index leaving Year-To-Date gains at 6.77%, and Market capitalization YTD gain at N2.23bn, or 15.36% above the year’s opening value.

Performance indexes across the sectors were largely bullish, except for the NSE Banking and Industrial Goods that closed lower by 0.34% and 0.14% respectively, while Insurance led the advancers after gaining 1.09%, followed by Consumer goods and Oil/Gas indexes which were up by 0.88% and 0.54% respectively.

Market breadth was flat as advancers equaled decliners in the ratio of 19:19, while activities in volume and value terms were down by 42.26% and 27.96% respectively, with investors trading 287.3m shares worth N3.4bn, as against the previous 489.11m units valued at N4.72bn. Volume was boosted by trades in UBA, Zenith Bank, Guaranty Trust Bank, Transcorp and FBNH.

We expect this volatility to continue, even as the market seems to range, looking at the sideways trending and candlestick formation pattern that reveals a breakout or pullback at this point, ahead of the Q3 corporate earnings season and healthy inflow of funds due to prevailing low rates in money market.

The mixed intraday movement is likely to persist this October in the midst of expected earnings, profit booking, as well as the mismatch in economic policies and negative macroeconomic indices. This is also against the backdrop of the fact that the capital wave in the financial market may persist in the midst of relatively low-interest rates in the money market, high inflation, negative Q2 GDP of 6.1% and unstable economic outlook for the rest of 2020 as government and its economic managers are going front and back with mismatch polices and implementation.

Also, investors and traders are positioning amidst the changing sentiments in the hope of improved liquidity and positive economic indices which may reverse the current trend.

We see investors focusing on portfolio adjustment and rebalancing by targeting companies with strong potentials to grow their Q3 earnings and dividend on the strength of their earnings capacity as the year last quarter is at the corner.