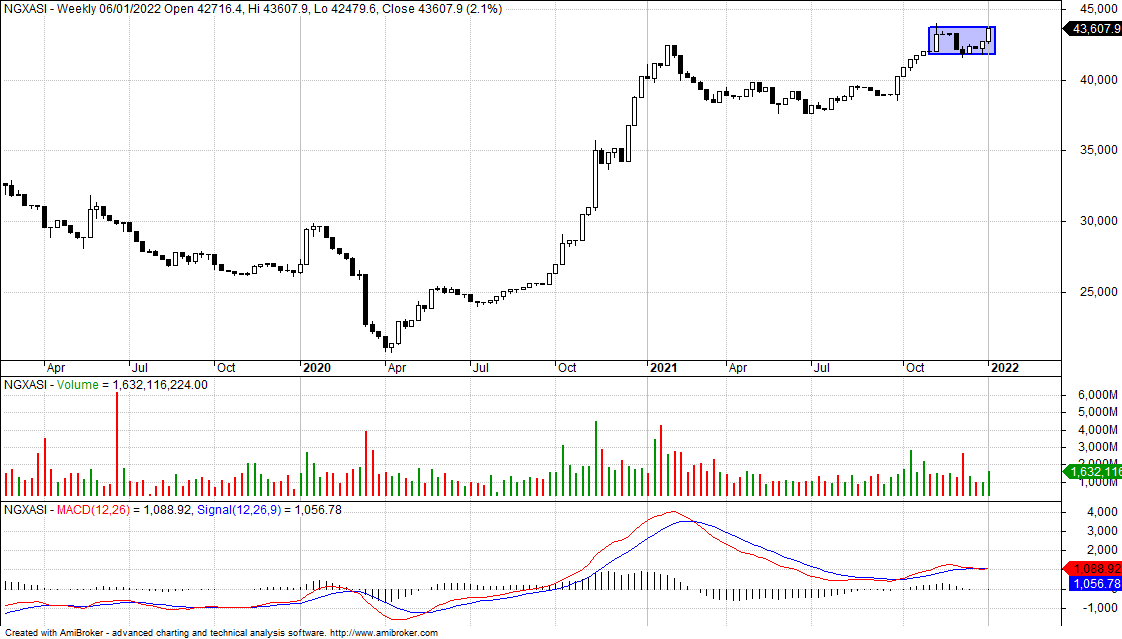 Equity prices on the Nigerian Exchange closed higher in the first trading week of the year, amid rekindled investors buying interests, the expected Q4 unaudited accounts and demand for BUA Foods Plc, which was listed on Wednesday.

This positive sentiment and portfolio repositioning ahead of the 2021 earnings season, in the midst of the rallying oil prices at the international market, emerging positive economic data, as investors look forward to release of the December consumer price index by the National Bureau of Statistics and outcome of the first meeting of the Central Bank of Nigeria (CBN) Monetary Policy Committee in 2022.

The share prices of many companies closed positive in the week under review as market players analyzed various signals from the Federal Government’s 2022 budget recently signed into law, in addition to the proposed removal of subsidy on petrol.  The price increases also tally with historical trends and patterns for January which offers insights into what the month will look like if the prevailing sentiment persists in the coming weeks.

The recent moves in the market and investors vibes signal the high possibility of this month defying the usual January effect and maintaining the positive performance recorded over the last two years. The month has historically posted gains in seven of the last twelve years, including pre-election years, recording losses in the other five within the period. This rally in the first week of the new year resulted from many factors ranging from market sentiments and performance in the previous year, market expectations in Q1, as well as investors’ and traders’ positioning for dividend paying stocks ahead of the Q4 unaudited accounts and 2021 full-year financials that comes with surprises in form of rewards for shareholders. The chart below reveals NGX January performance till date:

The buying pressure in the equity space began with the window dressing the final minutes of 2021, leading into the new year 2022 with the listing of BUA Foods as one of the drivers, in addition to the interest shown by foreign investors in Airtel Africa, Seplat Energy and GTCO, during the week under review.

This momentum and positive sentiment are good to kickstart the year, despite the uncertainties and opportunities associated with a pre-election year in Nigeria. On top of that, with the weak economic recovery and ongoing omicron variant, we at Investdata do not see tightening of monetary policy in this first quarter of the year, since inflation remains high, in the face of the likely removal of subsidy on petrol by the government and made worse by the rising unemployment rates across the nation today.  Let the NGX Manufacturing Companies Q3 Earnings Position below guide you ahead of the expected full-year audited results.

During the week, the following: Airtel, United Capital, PZ, Royal Exchange Assurance and others hit new 52-week high. So, to navigate the new year profitably, order for Investdata’s video on Technical Toolbox for Buy & Sell Decision Home Study Pack to enhance trading results and boost your bottom line. Also, to up your game in stock trading and investing, understanding the key to trading price and index action will go a long way to make the difference in your trading results, checkout the video materials below

The key performance NGXASI had a bullish performance for four straight trading sessions after Monday’s holiday to celebrate the new year, thereby extending the positive sentiments of the last trading week of 2021 to the first trading of the year, when it recorded 0.46% up on Tuesday. This trend was sustained at the midweek, Thursday and Friday with the index rallying by 1.05%, 0.30% and 0.60% respectively, bringing the week’s total gain to 2.66%, compared to the previous week gain of 1.07%. Overall, the week, month, quarter to-Date and Year-to-Date returns printed at 2.66%, respectively.

Top advancers table for the week was dominated by kobo stocks which had become the toast of investors, alongside the dividend paying stocks.  This was in the midst of continued portfolio repositioning on the strength of Q3 earnings reports and positive economic data. It is noteworthy that the NGX Index and price actions revealed the presence of buyers in the market, a situation that reflected on major sectoral indexes.

Market breadth for the week was positive on a huge traded volume as a result of 1.32 billion share of BUA Foods traded after listing 18 billion ordinary shares at N40 during the week, just as players expects historical trend patterns of January to support the recovery in the short to long-run, as investors increase their positions on dividend yields. Gainers outnumbered losers in the ratio of 40:31, on buying sentiment as revealed by investors’ sentiment report showing a 100% buy volume. Money Flow Index rose to 78.12bps from the previous week’s 72.25 points, an indication that funds entered the market.

The NGX index’s action, on a weekly chart maintained a bullish pattern, as its set to breakout a major resistance of 44,065.18, just as the candlestick formation at the end of the week revealed strong bull position on a high traded volume in the midst of buying sentiment at a strong resistance level. The candlestick pattern indicates a positive outing and that the market is recovery. Also, with all eyes on fixed income market yields and oil prices to further support market fundamentals and attract liquidity to the equity space. The NGX at this point is creating new buying opportunities for discerning players.

Academy Press and Cornerstone Insurance were the best performing stocks for the week after gaining 20% and 19.529% respectively, closing at N0.60 and N0.55 per share respectively on market forces and earnings expectation. On the flip side, SUNU Assurance and Consolidated Hallmark Insurance Plc lost 17.78% and 16.46% respectively, at N0.37 and N0.66per share, purely profit taking.

We expect a positive sentiment on dividend paying stocks to continue in the midst of profit taking as investors and bargain hunters position ahead of January historical trends and earnings expectation. It is also noteworthy that funds and portfolio managers continue to take position on the strength of Q3 numbers ahead of 2021 financials. For now, many stocks remain within their buy ranges to attract funds into the equity space. Also, investors will continue tracking yields movement in the fixed income market. Last week low volume suggests that institutional investors are not selling. It is noteworthy that oil price has continued to oscillates in the international market to trade above $70; corporate actions, as well as the Q4 unaudited numbers are around the corner.