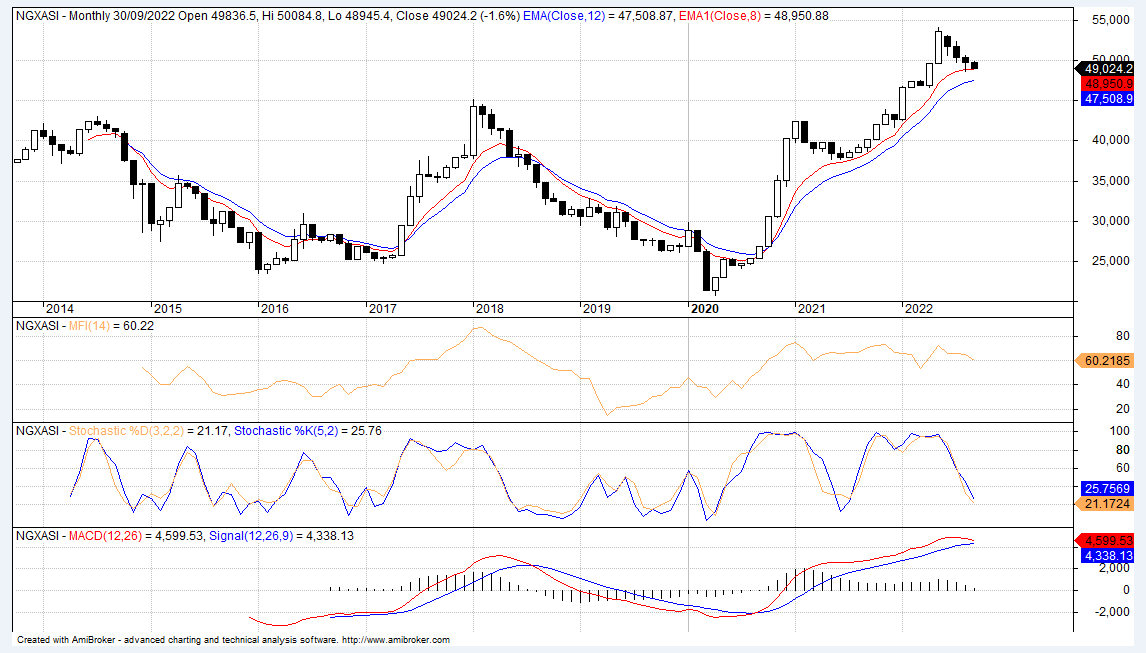 The NGX recorded a weak momentum in the month of September despite the mixed sentiment and trend at the beginning when the benchmark All-Share index was mostly below the T line to close lower. As such, it strengthened the four consecutive months of volatility and pullbacks to end the quarter and month in the red, helped by the low liquidity, increased ‘selloffs’ in blue chip stocks ad high cap companies, while investors took the back seat to observe market trends as reflected in the low volume traded for the month ahead of the Q3 earnings reporting season and year-end seasonality.

The period under review was bearish with the Nigerian Exchange (NGX) All-Share index extended its decline phase on a negative market breadth. In the process, the index broke down its strong support level of 49,000 basis points to test 48,945.43bps before rebounding to close slightly above the critical support level at 49,034.16bps, while remaining on the path of recovery on monthly chart to trade on top of T-line.

The possibility of this trend continuing on reversing high, considering the expected assets repricing and portfolio adjustment due to the prevailing high interest rates and rising inflationary environment as investors seek to hedge against inflation. Added to this is the expected quarterly earnings that might come mixed, reflecting the level of uncertainty in the foreign exchange market. The sectors that had performed well before now are likely to consolidate and even post better-than-expected Q3 and year-end financials should be the targeted at discerning traders and investors.

Nigeria’s equity market is at a cross road now after recording year to date return of 24% before pulling back 9% to about 15% at the end third quarter, made worse by the aggressive rate hike of 400basis points in the space of six months which resulted in panic selloffs. The bull-run in the first two quarters of 2022 was halted in Q3, showing the correlation between oil price movement and our market, with the price of crude also suffering a decline in Q3, the first time since 2020. Trading on the NGX in September, maintained its tradition as a month of positioning for the last quarter and year-end, despite the fact that investors would normally seek funds to pay school fees for their children and wards.

The pressure in foreign exchange, rising yields in fixed income market, low liquidity and the absence of institutional investors in the equity market are factors currently increasing profit-taking and selloffs in blue-chip stocks like GTCO, BUA Cement, Nestle Nigeria, Dangote Cement, Seplat Energy, and FBNH, among others. Also noteworthy is the fact that the ongoing correction has made dividend yield in the market high.

The month’s pullback was propelled by the decision of the monetary authorities to hike rates repeatedly thereby making the fixed income market direction unclear and bearish for the period under review, due to 2.50 basis point rise in the last Primary Market Auction.

During the just concluded third-quarter, the NGX’s ASI lost all of 5.40%, following which the market closed 14.77% lower Year-to-Date, boosted by the bearish posture that gives insight as to what the year 2022 would likely end in the green, in line with INVESTDATA analysts’ projection at the Invest 2022 traders and investors workshop held on December 4, 2021. This outlook was reaffirmed subsequently at different events like the Master classes, as well as the Q & A sessions with Ambrose Omordion that holds every Saturday via Zoom and has continued to record increased participation.

The correction recorded in September resulted from selling sentiment and outflow of funds searching for higher returns in less risk environment in the midst of portfolio reshuffling ahead of Q3 numbers. Noteworthy is the negative economic data released within the month by the Central Bank of Nigeria (CBN) and National Bureau of Statistics (NBS), which had significant impact on the market, to reflect the weak economic growth. This was because the data came in as expected, confirming the slow recovery in the economy, just as inflation rate for the month of August recorded 17 years high to 20.52%, from 19.64% in July, as well as the 3.54% growth in Q2 GDP. Also, Nigeria’s Purchasing Manager index (PMI) as released by Stanbic IBTC Bank expanded to 53.8 points in September from 52.7 points in August.

The volatility seen during the period was high on low volume traded that reflected the sell market and mixed sentiments during the period, resulting in 13 sessions of down market and 9 of bull trading. Traded volume for the month was down by 12.41% to 3.69bn shares, as against the 4.20bn units recorded in the preceding month.

Market breadth for the month was negative as losers outnumbered gainers in the ratio of 66:20, to continue a four-month bear transition with declining magnitude in loses after stock prices adjusted down moderately in the last few trading session of the month to resist decline. This was an apparent bargain hunting in high-priced stocks. The sell volume of total transactions for the month was 93%, while buy position stood at 7%, just as volume index for the period was 0.57.

The sectoral index movement table for the period were in red, led by NGX Insurance, which lost 6.67%, followed by the NGX Energy’s 4.49% decline, whereas the NGX pension and Consumer Goods followed with 2.80% and 2.64% up respectively.  Others are chart below, reflecting mixed market activities in their stocks. 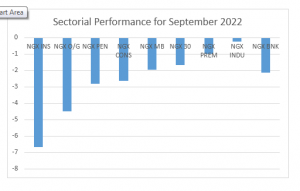 The best performing stock for the month of September was Multiverse, which appreciated by 40.48%, galloping on the strength of the expectation of new entrants and market sentiment; followed by Etranzact’ 28% gain; while the share price of Fidelity Bank rose 15,36% on the back of the 10 kobo interim dividend offered by the board, and stronger half-year earnings report. PZ chalked 12.80; and Flour Mills 10.99%; among others. 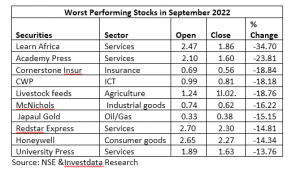 On the other hand, the worst performing stock for the period was Learn Africa, which lost 24.70% of its opening value for the month, due to price adjustment for its 20 kobo dividend and profit taking. Academy Press Plc lost 23.81% owing to the markdown for its bonus share and 10 kobo dividend, followed by the 18.84% drop in the price of Cornerstone Insurance; and CWG, 23.81%; on inflationary pressure in the midst of weak earnings performance and selloffs.

From the above chart, you would notice that the NGXASI on monthly basis is declining to form an asymeterial triangle that reveals a continuation of trend or reversal. A breakdown of this level and the bearish pattern will create a new entering point for discerning traders and investors. The candlestick formation for the month supports a bear momentum, whose continuation and reversal in the new month and quarter will depend on market forces and actual performance of the expected corporate Q3 financials. As we cross over to the last quarter of 2022, for which trading kicks off on Tuesday with likely high hopes that speculators will return to play the market ahead of year-end activities and seasonality.

Market technicals are showing increased fear with the NGX as performance YTD slowing down, as confirmed by the descending triangle chart pattern typically associated with uptrend setups and a trend continuation; and critical support levels on the NGX highlighted by the multiple technical analysis strategies which suggest that a range of 49,000-48,546 is acting as a major support level.

Should the NGXASI stay above the 49,000 level, then we interpret the recovery and trend as strong and healthy enough to support higher prices, after a slight correction or pullback due to likely profit-taking from the recent quarter end window dressing.

Consequently, the pullbacks in the market are likely to reverse, despite the little expected mixed trend that will offer yet another opportunity to jump into the high-flyers and dividend stocks that would drive the recovery of the NGX in the midst of smart money entering the market. There is also the impact of expected mixed Q3 earnings reports and positive economic data, as market players go defensive at this point considering the last quarter activities and momentum.

We see investors focusing on portfolio adjustment and rebalancing by targeting companies with strong potentials to grow their Q3 earnings and dividend on the strength of their earnings capacity as the year enters its last quarter to usher in 2023 election year.

Again, the current undervalued state of the market offers investors opportunities to position for the short, medium and long-term, which is why investors should target fundamentally sound, and dividend-paying stocks for possible capital appreciation for the rest of the year.

Also, we want to appreciate all participants and speakers at the Investdata Q4 master class that held over the weekend. We do believe that it was a very refreshing and worthwhile experience for all, as we prepare for robust returns on investment in the final weeks of 2022.

Meanwhile, to navigate the rest of the month profitably using fundamental and technical analysis to run, join investdata live sessions at noon every trading day “and also get investdata technical toolbox to play the current state of the market do suggest that discerning investors are gradually becoming greedy, while others are fearful, as seen in the recent range market. Despite the mixed sentiment witnessed, it is time to go shopping for undervalued stocks, sectors and the next insider playing opportunity.” To obtain your pack send ‘Yes’ or ‘Stock’ to 08028164085, 08179547605 now.