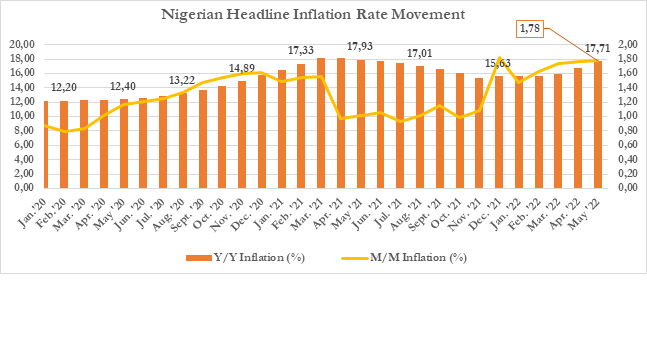 The National Bureau of Statistics (NBS) on Wednesday, 15 June 2022 released the Consumer Price Index (CPI) which measures inflation rate in the Country for the month of May 2022. According to the CPI data, the Nigeria Headline Inflation was pressured in May as it rose to 17.71% year-on-year (y/y), representing 89bps expansion over 16.82% reported in April. With this development, the Inflation number has recorded a four consecutive upward movement starting from February 2022. It is also the highest number recorded since June 2021 (eleven months high) when it was reported at 17.76%.

On a month-on-month (m/m) basis, the inflation index moved marginally upward to 1.78% in the period under review, representing 2bps higher than 1.76% reported in April. Note that this is the highest m/m inflation rate recorded since May 2017 (5-year high) when it hit a height of 1.88%. Similarly, a review of the 14 components that makes up the CPI showed that on a m/m basis, the indices’ price weights were higher than April’s numbers with heightened pressures seen in Food (+2.0%), Food & Non-Alcoholic Beverages (+2.0%), Alcoholic Beverages, Tobacco and Kola (+1.6%), Transportation (+1.6%), Clothing & Footwear (+1.5%), and Imported Food (+1.4%) categories. The pressures here typified the effects of prevailing FX, commodity, and energy crisis.

Further analysis of the CPI by its classifications showed that the Food sub-index spiked at a faster pace to 19.50%y/y (8-month high), depicting 113bps higher than April’s figure (18.37%). On a m/m basis, it recorded a marginal increase to 2.01% compared to prior month’s 2.00% (a basis point higher), however, it was the highest pace since December 2021 (5-month high). The Bureau noted that the upward food index was on the instance of price pressures on bread & cereals; potatoes, yam, & other tubers; wine, fish, meat, and oils; and other food products.

For the Core sub-index (all items less farm produce), the upward pressure continued as it spiked to 14.90% y/y (5-year, 2-month high) compared to 14.18% recorded in April, depicting 72bps upsurge. Similarly, on a m/m basis, upward pressure on the core index continued, as it rose to 1.87% compared to 1.22% reported in April. Markedly, this was the highest rate since the 2.70% recorded in May 2016 (6- year high). According to the NBS, the key drivers of the core rate were pressures on prices of gas, liquid & solid fuels; clothing materials; and passenger transport by road. 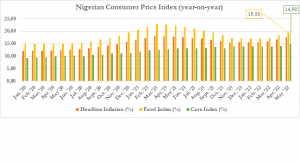 Recall that in our April 2022 Inflation review, we noted that the ongoing geo-political tension in Eastern Europe would worsen an already discriminating structural challenges at home and mount immense upward pressure on price environment in months ahead. The 89bps increase in the aggregate price level in May buttressed the above assertion. Our in-house estimates suggest that this condition is expected to continue in the short-to-medium term as the supply-chain bottlenecks that have significantly pushed prices of major food commodities like flour, wheat, sorghum, maize etc high takes a toll on general price level.

Markedly, the core inflation index has continued to be driven by persistent FX pressure, supply chain bottlenecks arising from geo-political tension in the Eastern Europe, rising energy prices associated with epileptic supply of Premium Motor Spirit (PMS), high cost of Automotive Gas Oil (AGO), mostly used in transportation and production, as well as a progressive hike in electricity tariffs. For the food component, it was essentially driven by shocks to food prices associated with persisting security challenges in major food-producing areas and legacy infrastructural problems which continue to hamper food supply logistics and storage facilities across the country.

What would the MPC do next in its July’s meeting?

At the last meeting of the MPC held late in May, the committed voted unanimously to raise the Monetary Policy Rate (MPR) by 150bps to 13.0%, to stem the burgeoning inflation in the country, reduce the exchange rate depreciation via foreign capital inflows, and sustain diaspora remittances. How well this decision has impacted on the economy is yet to be adequately reflected. On a positive note, boosted by 7.06% rise in Brent oil price, the country’s external reserves’ account rose by $7.98mn (+0.02%) to sit at $38.63bn as of Wednesday, 15 June 2022 compared to the closing number as of 24 May 2022, when the committee held its last meeting. However, the local currency at the FX market depreciated by 0.60% within the same period above to settle at ₦118.51 against the US$. The next MPC meeting is scheduled to hold on the 26th and 27th of July 2022.

Based on the above developments, we expect headline inflation to maintain upward pressure in June 2022. Food inflation is expected to rise the more amid structural challenges, logistics and distribution bottlenecks. For core inflation, we expect it to climb further amid the heightened energy crisis, increased spending on the back of the upcoming 2023 general elections. Putting the above factors together, we may likely see yet again an over 75bps increase in the headline inflation reading for June 2022.