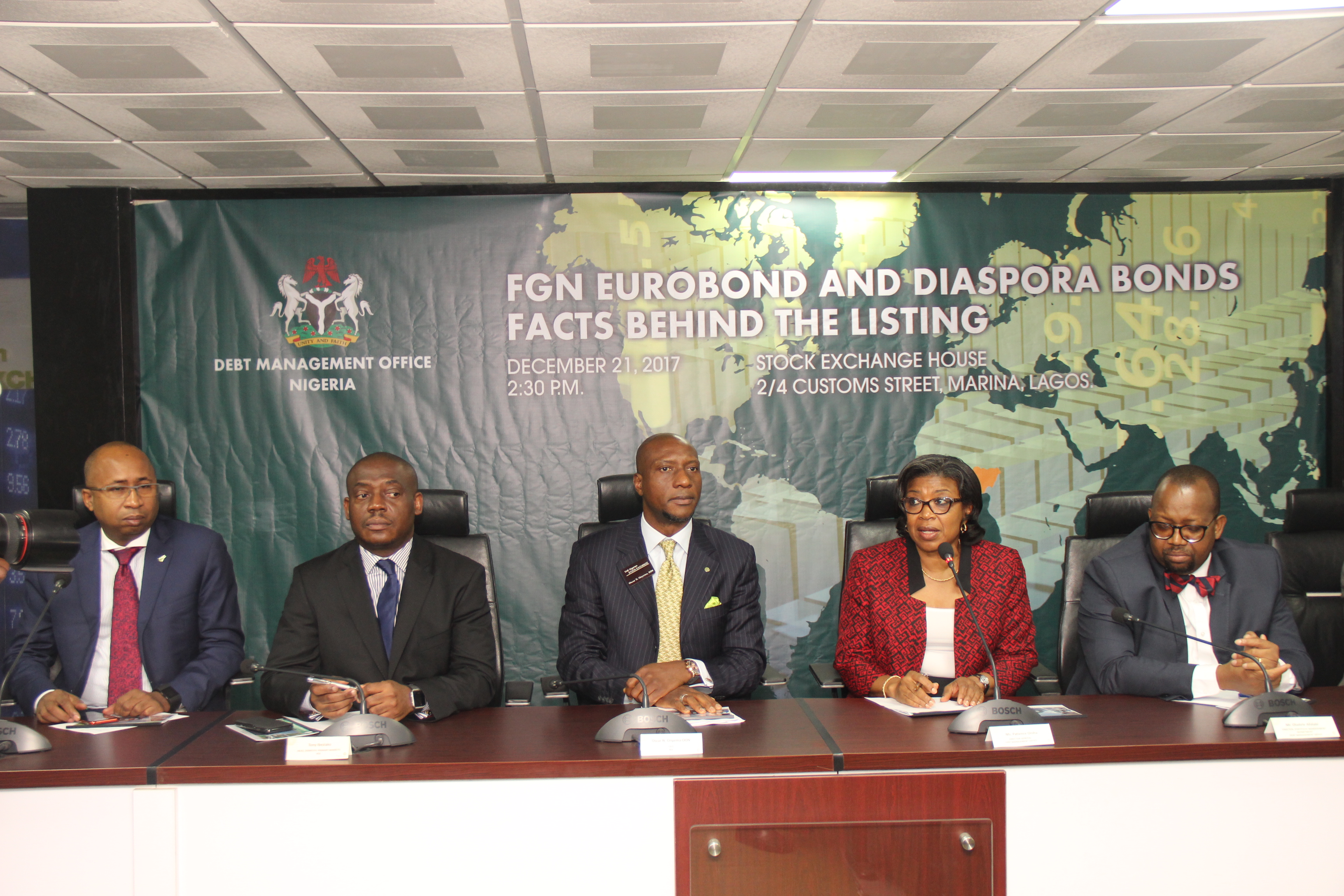 Mrs. Patience Oniha, Director-General of the Nigeria’s Debt Management Office (DMO), on Thursday said the nation’s recent $3bn Eurobond to restructure the Federal Government’s total debts raked in $11.35bn, representing $8.35bn or 278.33% oversubscription rate.
This, she told stockbrokers during the listing of the bond on the Nigerian Stock Exchange (NSE) in Lagos, is very significant and shows the level of confidence the nation enjoys among international investors, helped by the enormous work so far done by the Federal Government to put the economy on track.
“As Nigerians, we should be proud that international investors were willing to invest in Nigerian debt at 7.625% per annum (for 30-year money).”
Nigeria achieved the subscription level and the favourable coupon of $1.5bn each at 6.5% and 7.625% for 10 and 30-year funds per annum respectively, she continued, on the strength of its emergence from recession, being able to keep inflation in check; besides the huge foreign reserves now at $37.353bn as of December 18, 2017, according to information available on the Central Bank of Nigeria (CBN) website on Thursday.
Part of the proceeds, she continued, is for liquidating the nation’s domestic debt, particularly Treasury Bills which are issued at 18% and has so far made domestic borrowing prohibitive for private sector players seeking to borrow for productive activities and have no access to the international market.
Even then, she continued, “the $3bn does not (is not enough) take out the huge N3.77tr total Treasury Bills so far offered by the Federal Government,” adding that $500m was spent on repaying bills that matured in December.
“In December, we didn’t do TBs, so as to reduce our exposure to the domestic market,” she stressed.
With the move, Oniha continued, private sector players can now issue corporate bonds at more market friendly rates, resulting in a more vibrant domestic market.
From the proceeds of the total of $4.5bn Eurobond so far issued in the months of February, April and November, and the $300m in Diaspora bonds subscribed to by Nigerians abroad, she explained that $2.5bn was to fund the 2017 budget, out of which N750bn is to be released for capital projects.
Fielding questions on the foreign exchange risk of the Eurobond issuances, she said it is not significant, since Nigerian earns income in U.S$, just as the Federal Government is working seriously to diversify the economy from oil to other revenue sources, particularly agriculture.
“Going forward, we hope that Nigeria’s level of borrowing will not be so high,”
Speaking further on the Diaspora bond, Oniha explained that Many Nigerian professional who are economically empowered and leave in Europe and the U.S. were the target, offering an opportunity to contribute the growth and development of their homeland, while offering them some form of secured investment outlet in the currency that they are used to.
The only other country in Africa that has so far successfully offered Diaspora bonds so far, she said, is South Africa.
Impacts of the bond, going forward, the DMO boss explained, is that it would enable Nigeria achieve positive impact on its overall macroeconomic management, including monetary and fiscal policies; while helping to rebalance domestic and international debt portfolio to 60:40 split over the coming years, among others.