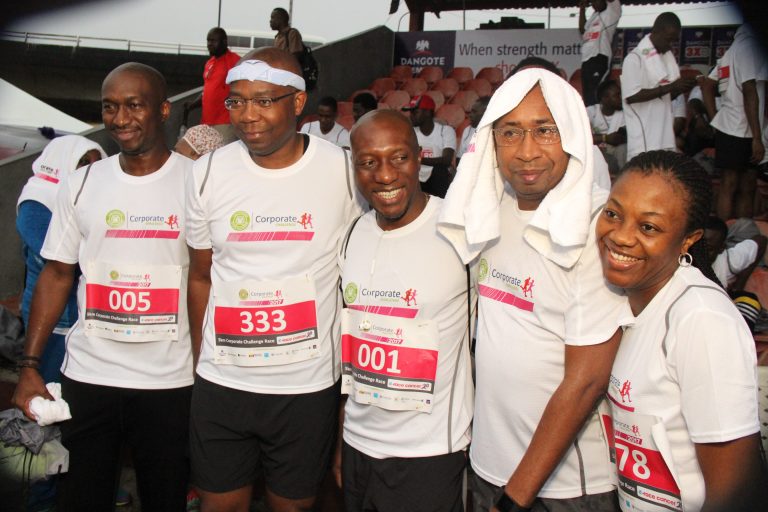 First Half of the year Market Roundup

The Nigerian stock market market and economy for the first half of the year was a reversal of the 2016 economic and market performance as commodity prices, particularly oil in the international market moved from a low of $28 per barrel in January 2016 to high of $57 in 2017, before closing the period under review at $45. The big surge recorded in crude oil price was between November 2016 and April 2017. This improvement in oil price impacted the government revenue positively to reflect on our reserve that supported government spending.
Also noteworthy is the monetary and exchange policies of the Central Bank of Nigeria (CBN) so far this year, which has been a major driver of economic recovery through its sustained intervention in the foreign exchange market. This has significantly helped to revamp the nation’s manufacturing and other sectors by meeting the US$ supply side of the market and ensuring relative stability in exchange rates. By extension, this has supported appreciation of the Naira against major global currencies, thereby closing the exchange rate gap in the black market.
All of these have impacted the nation’s inflation rate which has remained on the decline over the past four straight months, dropping to 16.25% from high of 18.55% in January 2017.
The success of the ongoing economic recovery efforts reflected in the Q1 GDP figures of negative 0.52%, a sign that the nation is gradually, but steadily turning green, especially since the CBN reviewed its ongoing exchange rate regime in February, a pointer to where the economy is heading after the market suffered three consecutive years of down market resulting in huge under-valuation of equities with equities parading low price to earnings (P/E ratios). The improvements recorded in the Q1 corporate earnings presented to the Nigerian Stock Exchange (NSE) have supported prices so far during the recent rally.
The delay in passage of the 2017 budget and signing of the appropriation bill into law, coupled with the implementation style of the extended lifespan of the 2016 budget’s capital expenditure affected the fiscal authorities for the period under review. Incidentally, these are expected to drive the economic recovery and growth plan agenda of the government.
Meanwhile, the composite NSE All Share Index for the first half of the year gained 6,242.86 points to close at 33,117.48 points from the opening figure of 26,874.62 points, representing a 23.23% growth on improved volume of 43.13bn shares traded, from previous half-year’s 40.29bn shares traded. Demand for stocks increased on the ameliorating economic condition that supported stronger corporate numbers upon which investors acted to drive prices, with eyes on enhanced dividend payment.
The buying volume of total transactions for the period was 88%, while selling position was 22% to maintain the same up market for same period in 2016. Similarly, market capitalisation for the period rose by N2.2tr to close higher at N11.45tr, from an opening value of N9.25tr, representing 24.04% appreciation in value. This was as a result of positive sentiments as market confidence and fundamentals become stronger, despite the unstable crude oil price as well as the socio-political environment.
The Q1 corporate earnings that beat expectations and the positive macro-economic indices released so far especially the Purchasing Managers Index (PMI) that remained above the 50 point threshold, added to the improving inflation data that have confirmed economic recovery, while supporting market fundamentals. In addition to the improved liquidity in the import and export window of the foreign exchange market that had continues to attract inflow of portfolio foreign investments to allow foreign players pull their funds, unlike in the past when this was impossible, thereby negatively impacting the confidence to reinvest their dividend or reposition portfolios. The CBN move therefore gave them confidence as the new window give easy access to FX.
No doubt, Nigeria’s economic recovery has influenced its equity market positively in the period under review. The recovery is expected to enhance subsequent corporate earnings that will further drive equity prices if the numbers beat estimates. The recession resulted in the Naira becoming undervalued, just like equity prices, agro produce, real estate and others, thereby creating investment opportunities in the market, even as risk management was key amidst continued cautious trading and investing among investors seeking to protect their investable capital.
Market breadth for the period was positive and strong as the number of advancers outpaced decliners in the ratio of 64:22, reversing the bearish transition of 2016, after the market had suffered three consecutive years of downturn.
As shown in the sectoral performance chart below, the banking sector gave the market the most significant boost in the half-year, gaining 45.08%, more than double that of the composite NSE All-Share Index. It was followed by the Pension index that soared by 42.92%, while NSE Premium galloped by 31.15%. Other sectors that recorded growth were: Industrial Goods, Consumer Goods, Insurance, NSE 30, Oil and Gas. The only sub-sector that closed red was the alterative market index, which lost 1.12%. 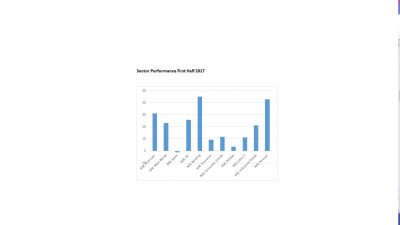 The best and worst performing stocks in the first half of year are recorded in in the table below.
Of the 64 stocks with share prices appreciation, 40 gained over 20% compared to the closing value at the end of last year, with May & Baker as the best performing having gained 312.77%, helped by the Memorandum of Understanding (MoU) it signed with the Federal Government for the production of vaccines locally. The price movement follows expectation that the move would boost the company’s earnings power and profit, expected to result in enhanced dividend payout at year end. It was followed by Stanbic IBTC’s 120%, helped by its impressive Q1 numbers that investors hope would result in far better payout than the seemingly miserly dividend of the 2016 financial year. With banking stocks pushing the market higher, it shouldn’t come as too much of a surprise that 12 of the best performing stocks for the period having over 20% value gained were from the sector, as UBA’s 94.67% placed it behind Stanbic IBTC; while FBNH, ACCESS, FIDELITY and ZENITH BANK closed the half year better by 90.45%, 58.43%, 55.95% and 41% respectively.
The worst performing sectors in the period under review were Oil/Gas and Manufacturing, followed by services providers. The half-year’s worst performing stocks in terms of share price movement was petroleum products marketing and power generation giant- Forte Oil, which shed 40.70% on account of weak earnings and market reactions to its proposal to raise fresh capital which investors fear would dilute their stake in the company. There is also the fact that the company could not pay dividend at the end of the 2016 financial year ended December 31. It was followed from afar by 7-Up with 32.98% decline in value due to its dwindling earnings and loss after tax of N10.3bn in the 2017 financial year; Meyer lost 19.54%; and Trans nation-wide Express, 17%.
See others on the table below:

Where to invest/Expectation For 2017 Q2
The market and indeed the economic outlook for the second half of 2017 are becoming unpredictable and unstable due to the delayed disbursement of funds for implementation of the 2017 budget, despite the fact that it took a whole half-year before it was passed and signed into law. The proposed initial release of N350bn to Ministries, Department and Agencies (MDAs) after such long delay is a far cry from the N2.36tr planned spending on infrastructure to drive economic growth after the much celebrated N1tr capital vote in 2016, which has not translated into improved power supply that would result in reduced production cost for manufacturers, good road to reduce cost of transporting agricultural produce and persons.
Until there is a change in government’s implementation style, the Economic Recovery & Growth Plan may remain just good reforms agendas only on paper and the imagination of its promoters. The improved oil production and relatively stable exchange rate as a result of CBN intervention and flexibility in the FX market, in addition to the stable oil price would nonetheless contribute to the attainment of positive real GDP growth this year. We equally acknowledge the positive impact of the relative peace and security in the nation’s Niger Delta region and stability in oil output with upside implications for the nation’s revenue, economic health and wellbeing.
For this third quarter and rest of the year, more positive economic data are expected, especially inflation figure for June, PMI and second quarter GDP to really confirm the level and stage of economic recovery.
As second quarter earnings reporting season kicks off this month, it would expectedly reveal the impact of the economic recovery on corporate performance.
Traders and investors who understand the operations of the stock market and the economic cycle know that they are instruments to identify leading sectors and at the same time forces behind the recovery so far to take advantage and position in those sectors for medium to long term gains. This is especially true of the financial services sectors, as well as the agro-allied businesses, construction/building material related companies and healthcare companies.
Meanwhile, the 2017 first quarter financials due to be released soon should help investors project whether the companies are likely to post a better Q2 or not, after studying the target company’s full-year 2016 numbers and Q1 2017 earnings to show trend and direction.
Equity price movement as we have always noted in INVESTDATA, is a function of earnings and dividend payment at any time. This is in addition to information emanating from these companies, which are expected to attract more market players, dividend investors and possibly foreign bargain hunters to the market.
INVESTDATA analysis shows that over the past three years on the Nigerian stock market, the month of July and August have been bearish, despite being an earnings reporting season which suggests that traders should be cautious and watch their position when the numbers start rolling. This will enable the investor know when to cut his/her loss immediately and move to other stocks that are already on their watch list.

What to expect in July and August
• More quarterly and few full year earnings would be released. Earnings from blue-chip companies may strengthen market fundamentals, if positive and beat estimates.
• The oscillating trend of equity prices as a result of profit taking and some disappointing numbers that will be released this period. Also the source of funds brought to the market may cause fluctuations, giving that both local and foreign institutional investors trade in the market. Also, there is the factor of the Federal Government overcrowding the financial market, offering high and mouth-watery rates that private players cannot.
• Investors are expected to reshuffle their portfolio and invest in equities with strong fundamentals and prospects of growing their earnings going forward.
• A more vibrant market as a result of market players positioning for second half of the year, even as we expect liquidity to improve more.
• Market outlook for these months are dicey but invest wisely, using dates, bids, offers and volume when taking decisions.
• Managing risk and protecting capital at this point is very important, so you will be able to determine when to buy or sell by watching the stocks and the market, using technical analysis tools.