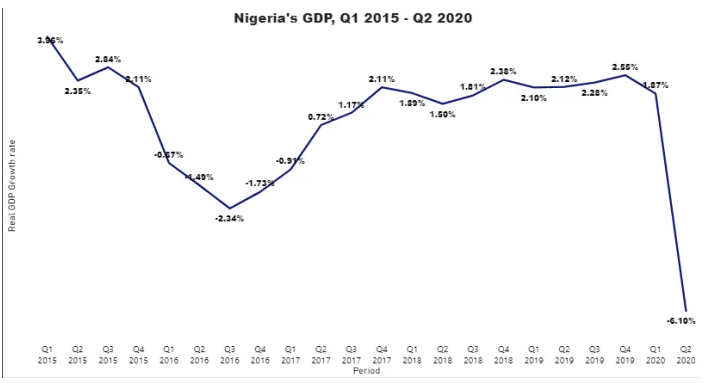 After three years of lackluster, but positive performance, the Nigerian economy expectedly returned to the negative territory, the first since the 2016/2017 bout of recession, contracting by 6.1% (year-on-year) in the second quarter of 2020, compared to a 2.12% growth in Q2 2019, according to a new report by the country’s National Bureau of Statistics (NBS).

The contraction, analysts at Arthur Steven Asset Management Limited (a member of the Nigerian Stock Exchange) say, is “the steepest since the first quarter of 2004.”

The contraction, the bureau noted in its report released on Monday, “was largely attributable to significantly lower levels of both domestic and international economic activity during the quarter, which resulted from nationwide shutdown efforts aimed at containing the COVID-19 pandemic.

There was also the impact of the subdued oil prices since last year, as oil producers under the aegis of the Organisation of Petroleum Exporting Countries and non-members who are major producers like Russia sought firm up the prices by controlling production output.

“The domestic efforts ranged from initial restrictions of human and vehicular movement implemented in only a few states to a nationwide curfew, bans on domestic and international travel, closure of schools and markets etc., affecting both local and international trade. The efforts, led by both the Federal and State governments, evolved over the course of the quarter and persisted throughout,” it added.

Recall that the index case of the virus entered into Nigeria on February 27, while the lockdown started in the last week of March, which is why the nation’s first-quarter real GDP grew by 1.87% in Q1 2020.

This was not also unexpected, the NBS continued, because “only 13 activities recorded positive real growth (in the review period) compared to 30 in the preceding quarter.”

According to the breakdown, average oil production for the period stood at 1.81m barrels per day, down from 2.02mbpd in the corresponding period of 2019 and lower still than the 2020Q1 production volume of 2.07mbpd, the highest since 2016Q1.

Non-oil contribution for the period was driven by the services sector that accounted for 53.49%; followed by agriculture with 24.65% and industries, 21.87%.

The sector declined by –6.05% in real terms during the reference quarter, the first since Q3 2017, even as output in the sector “was driven by Financial and Insurance (Financial Institutions), Information and Communication (Telecommunications), Agriculture (Crop Production), and Public Administration, moderating the economy-wide decline.

“On the other hand, sectors which experienced the highest negative growth included Transport and Storage, Accommodation and Food Services, Construction, Education, Real estate and Trade among others,” the NBS noted.