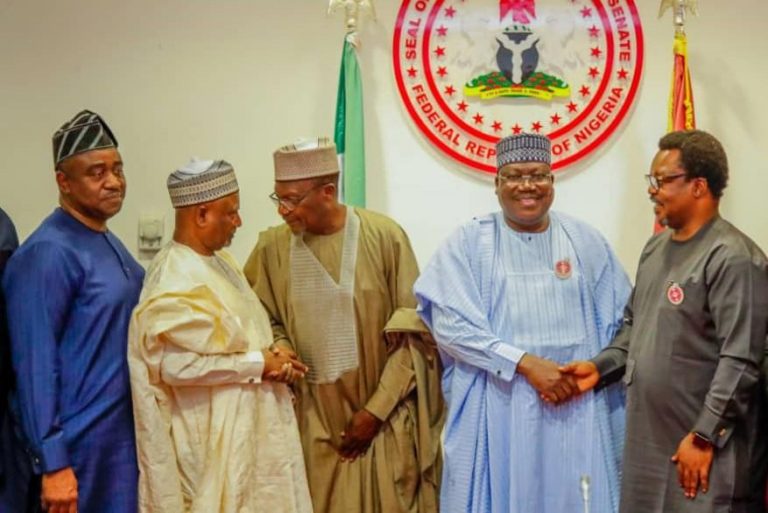 Senate President Ahmad Lawan, on Monday, warned that the National Assembly under his leadership will henceforth insist on accountability and transparency in the nation’s power sector, particularly in the application of funds proposed in the 2020 Appropriation Bill now under consideration.
Lawan, who spoke when the Managing Director of the Niger Delta Power Holding Company, Joseph Chiedu Ugbo, led a delegation on a visit to the National Assembly, Abuja, lamented that “in most cases, the deals were against the national interest… against the people and against the country.
One major challenge that Nigeria today has had to grapple with for a very long time in the area of development, he continued, is power, stressing that “what we have are a few companies that are milking this country dry. I think we must insist on getting value for money.
“The kind of money sunk into the power sector will not only provide light for Nigeria but also the neighbouring countries,” he added, assuring that “the Senate and House Committees on Power will look to see how we can make a difference this time around because we intend to monitor closely any money put in the budget. We want to see such money prudently applied.”
In a statement by Ezrel Tabiowo, Special Assistant (Press) to President of the Senate, Lawan warned that those behind shortchanging the government in the various power deals will be held accountable for their actions.
He said the Senate and House Committees as part of oversight, he stressed, will ensure the prudent application of all funds channeled to the power sector, wondering how “billions of dollars will just disappear like that, and there still won’t be power. This National Assembly will not close its eyes or not take any action if our nation is shortchanged.
“We are very concerned with what is happening in the power sector because personally we have not realised the best deal at all,” lamenting the situation where the Federal Government had been shortchanged in the process of entering various agreements with generating and distribution companies in the past.
“Until we are able to fix the power situation, the development will continue to be difficult to achieve.
“This is one area we will continue to give priority to ensure we are able to meet the targets. It’s not going to be easy, but the Government of President Muhammadu Buhari has shown clear determination in ensuring we get power fixed.
“The power sector has been surrounded by controversies for a long time. When the NIPP started, so many things were said; some of which are true.
“Expenditures were made in the past, and we did not see commensurate results from the expenditures. It is something to worry about.
“Some persons also have the tendencies to sign agreements that sometimes are clearly against the national interest. Time has come for people to stop doing this.
“In most cases, the Federal Government was shortchanged in some of the agreements signed by the people. I really don’t know what they were thinking.
“We need to be very careful. Time will come when people will be held responsible for their actions.
Earlier, Ugbo recalled that the NPDC was set up in 2005 to bridge the infrastructure gap in the electric power supply industry.
“We started with ten generation plants, and then moved on to transmission to ensure power distribution gets to the end-users,” he said.
Ugbo was accompanied by Babayo Shehu, NPDC’s Executive Director, Finance and Accounts; Ifeoluwa Oyedele, Executive Director, Engineering/Technical; Mahmud Mohammed, Company Secretary, and Legal Adviser; Nkechi Mba, General Manager, Procurement, and Mohammed Bunza, General Manager, Communications and Public Relations.
Senators present during the visit were the Leader of the Senate, Yahaya Abdullahi; Deputy Majority Leader, Ajayi Boroffice; Deputy Minority Whip, Sahabi Alhaji Ya’u, and Chairman, Senate Committee on Power, Suswam Gabriel.
Others were Chairman, Senate Committee on ICT and Cyber Crime, Yakubu Oseni; Chairman, Senate Committee on Employment, Labour and Productivity, Benjamin Uwajumogu, and Chairman, Senate Committee on Youth Development, Kola Balogun.