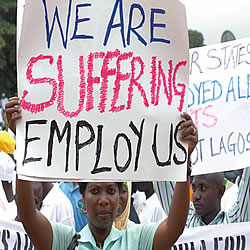 The National Bureau of Statistics (NBS), on Friday released its Labor force report for
Q1-Q3 2017, showing that Nigeria’s combined unemployment and underemployment rates soared to 40% in Q3 2017, compared to 35.2% in the last quarter of 2016.
A breakdown of the data showed that unemployment rate stood at 18.8% in Q3 2017, from 14.2%, making it the 12th consecutive increase since 2014Q4.
The number of unemployed Nigerians rose to 15.99mn, from 11.55mn in Q4 2016up; while underemployment rate crawled to 21.2%, from 21.0%.
However, unemployment, according to Dr. Yemi Kale, Statistician-General of the Federation and chief executive of NBS, does not translate to job losses, but a “combination of mostly new entrants who didn’t find jobs upon entering labour force and others that lost jobs.”
The country’s economically active or working age population (15-64 age bracket), the report said, rose to 111.1m in Q3, from 110.3m in the preceding quarter, just as the labour force population climbed from 83.94m in Q2 2017, to 85.09m.
The aggregate number of people in full-time (at least 40 hours a week), the report said, fell from 52.7m in Q2, to 51.1m in Q3, which it said may be due to people choosing to work fewer hours hence becoming underemployed or people like intending students or new mothers choosing to leave full time employment entirely or temporarily.
Also, the number of unemployed or under-employed people within the labour force climbed from 13.6% to 17.7m and 15.9m to 18.0m in Q2 and Q3 2017 respectively.
In Q3 2017, the report said 21.2% of women within the labour force and willing, able and actively seeking work, were unemployed, up from 16.5% of men within the period.
In the urban centres, unemployment rate rose from 16.4% to 23.4%, just as under-employment expectedly grew at a faster rate than in rural areas of the country.
“Under-employment is predominant in the rural areas (26.9% or rural residence within the labour force in Q3 2017), are under-employed (working for less than 20 hourse a week), compared to 9% of urban residents within the period.”
A further breakdown showed that unemployment rate among young people (aged 15 to 24 years) stood at 33.1%, while under-employment rate rose to 22.2% from 22.3%; and 20.2% for those within the 25 to 34 age bracket; just as it declined from 35.1% in Q2, to 34.2%.
This also translated to 67.3% of young people aged 15-24 years either being under-employed, or unemployed, up from 64.6% in previous quarter; while that for the 25-34 year age group stood at 42.5%, up from 39.6%.
The combined youth unemployment and under-employment rate (15-35) therefore came to 52.65% or 22.64m, broken down into 10.96m unemployed and another 11.68m of under-employed youths, up from 47.41% in 2016Q4.
“Unemployment tends to be higher for people within the labour force that have post-secondary school qualifications (31.8% unemployment rate and 50% combined unemployment and under-employment in Q3, 2017). Graduates tend to prefer fewer in supply white collar jobs rather than often rural, seasonal and low skilled and lower paying blue-collar jobs that are more in supply,” the report added.
According to the NBS report, the nation’s economy moved out of recession technically (a situation synonymous with increased job loss and a freeze in new employments) in the second quarter of 2017, when GDP grew at 0.71% (revised) and then 1.5% in Q3, with many economic activities however still contracting or recovering sub-optimally.
It noted that “a return to economic growth provides an impetus to employment. However employment growth may lag, and unemployment rates worsen especially at the end of a recession and for many months after.
“The unemployment rate induced by a recession, typically peaks about 15-18 months after the beginning of a recession or 4-8 months after the end of a recession before it returns to its pre-recession trend. This, in the case of Nigeria will be a peak in Q4 2017 which means we will only expect unemployment to return to its normal trend in 2018.”
The report however noted that the length of the lag depends on how deep and long the recession was and how stable and fast the recovery is as well as on the economic sectors diving the recovery (labour or capital/technology intensive).
On a state-by-state basis, NBS reported oil-rich states of Rivers as having 41.82%, the highest rate of unemployment in Q3; followed by 36.58% for Akwa Ibom; and 30.36% in Bayelsa; while Imo came fourth with 29.47% rate.
Katsina and Jigawa in the North West; as well as Gombe and Yobe in the North Eas, recorded the highest rate of under-employment rates at 46.19%, 43.01%, 38.38% and respectively.