Market Update for March 23
(By AMBROSE OMORDION)
Trading activities on the floor of the Nigerian Stock Exchange on Thursday was mixed to halt the two trading sessions of down market, closing flat as investors analyse the impressive numbers from Stanbic IBTC and Unilever Nigeria, especially the decision of both boards (which incidentally has Mr. Atedo Peterside, founding chief executive of Stanbic IBTC Holdings as member), opting to retain a huge chunk of their earnings, by paying a little to shareholders as dividend, at a time when the global and domestic operating environments are still bedeviled by so much uncertainties. The slow rate of submission of 2016 financials have not helped, as regulatory filing deadline draws near, yet only few companies have released their results so far. It remains to be seen whether or not this is just a consolidation before resuming back up. Right now, the odds favour the upside, so we would see if that occurs.
As we had said earlier, the gradual improvement in Nigeria’s economic indicators and liquidity in the system is also expected to be boosted by the second tranche of the Paris Club refund to state governments. In the first tranche, a total of N388.3 billion was distributed, with five states: Akwa Ibom, Rivers and Delta in the oil-rich south-south region getting the lion’s share of N14.5bn each; just like Lagos, the nation’s commercial and economic nerve centre in the South West and Katsina in the North West, also received N14.5bn.
The possibility of the Paris Club refund’s second tranche, estimated to be in the region of N500bn rubbing off on the economy when eventually distributed as President Muhammadu Buhari has directed when he showed up at the National Economic Council (NEC), last week, would however be dependent on the judicious use of the refund to spur economic activities in the various states. The Federal Government expects that the refund would not only help the state government defray arrears of workers’ salaries and pension liabilities, it is expected to help create jobs and strengthen the socio-economy of the states, boosting confidence, thereby further supporting current economic gains to sustain the ongoing recovery mode.
Global markets remained mixed as the U.S Dollar and oil prices continue to slide. Meanwhile, increasing oil storing capacity of the U.S has kept oil price at a four-month low of $47 to remain the major concern of investors, just as traders believe the price will retrace up soon.
The composite NSE All-Share Index was flat at 25,514.09 points, on a low volume of trades, compared to the previous day’s figure. Volume index was 0.54 with buy position of 58%, while sell volume was 42%. Similarly, market capitalisation for the day lost N23.37 million to close at N8.83 trillion, from an opening value of N8.83 trillion.
The All-Share index’s year-to-date negative position remained at 5.09%, while market capitalisation for the period adjusted to N491.45bn, representing 4.54% loss YTD, from the opening value.
Market breadth for the day reversed to positive and strong, as the number of advancers outweighed decliners in the ratio of 20:14 to stop the two trading sessions of bear transition.
Market activities in volume and value were down by 42.11% and 43.87% respectively to 115.11m shares from 198.84m in the previous day and N1.42 billion, from N2.53bn respectively.
Financial services stocks like Guaranty Trust Bank, Access Bank, UBA and Stanbic IBTC, as well as Transcorp dominated the day’s activity chart as most traded equities by volume.
The NSE All-Share index and all sectoral indices closed mixed, as the NSE Industrial Goods, NSE Consumer Good, NSE Insurance and NSE Lotus closed green to end the day’s trading.
During trading FBN Holdings notified the investing public of a likely delay in filing its 2016 financials, while Airline Service and Regency Alliance Insurance also informed the exchange of board meetings to discuss their 2016 financials and dividend payment. Unilever Nigeria released its 2016 full-year earnings report, offering a dividend of 10 kobo.
Lafarge Africa led the advancers log with 8.47% to close at N41 in apparent positive investor reaction to its 2016 audited result and its proposed 105 kobo dividend; followed by LearnAfrca with 4.62%, to close at N0.68 on market forces; while Saplat topped the decliners log, losing 9.72% to close at N339.28, and Guinness, 4.21% to close at N60 per share.
NSEASI DAILY TIME FRAME 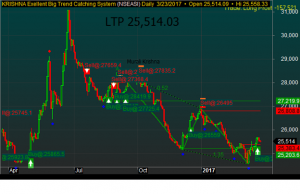 The index on a daily time frame resisted selling pressure of profit taking to close flat, remaining outside of the falling channel on a low volume and mixed sentiments as revealed by the sell/buy volume index. The mixed earnings reports and market forces will determine the up or down trend of the market going forward.
The index candlestick formation pattern as at close of trade supports a bull move, depending however on the forces that play out this morning as the market opens. But funds are exiting the market as indicated by MFI, while the current trending ability of the market on a daily time frame is strong, as ADX is above 20 at 20.16, MACD is still bullish and has remained so over the past 10 trading sessions, while RSI is reading 53.27 as at the close of trading.
Stocks to watch; Eterna, Access Bank, Aiico, Fidelity, Zenith and Ucap 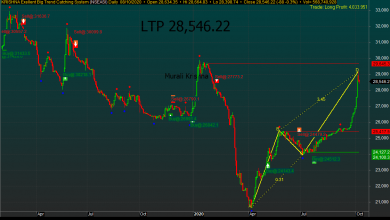 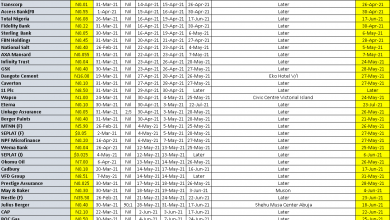