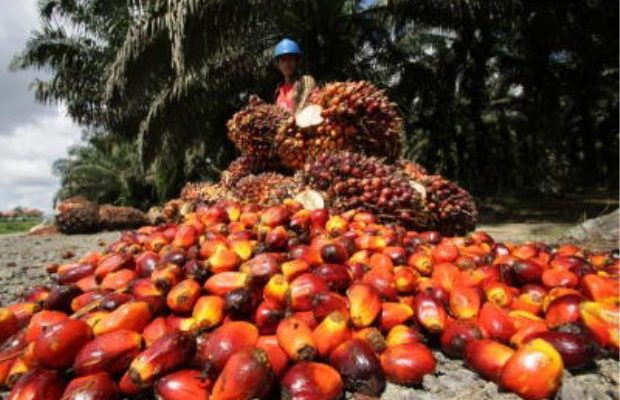 Introduction/Key Financials
• In this report, we have carefully observed the financial performance indices of Okomu Oil Palm Plc, for the half-year ended 30th June 2018, compared the same with figures released in the corresponding period of 2018 for the purpose of establishing a growth prompt.
• Nevertheless, we have carefully chosen our valuation approach, while using the full-year financials for projections and other valuation processes.
• Please understand that the current half-year numbers came lower when placed side-by-side with that of those of a similar period of 2018.
• A careful look at the numbers showed that revenue for the period largely stood below that of the corresponding period, while other expenses remained fairly controlled. 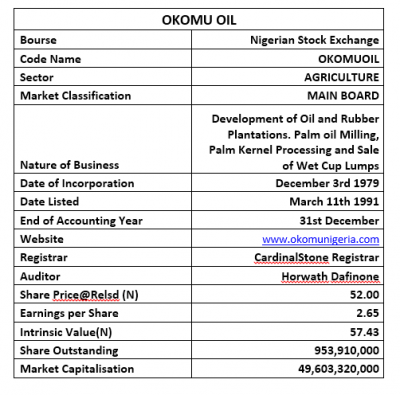 Company figures
• As noted above, the Turnover reported for the period came 33.80% below that of the comparable year. In other words, Turnover for the quarter was N8.56 billion, down from the previous half-year’s N12.93 billion.
• Operating Expenses is currently valued at N1.69 billion, lower than the N1.79 billion estimated at the end of the 2018 half-year.
• Due to lower revenue reported, Operating Profit came 58.20% below the comparable quarter of 2018.
• Operating Expenses reported at the end of the period was the same as N3.96 billion, just 5.09% below the N4.17 billion used through the comparable quarter.
• Finance Cost used through the period is valued at N101.10 million, which is 60.15% below the N253.72 million reported in its 2018 half-year numbers.
• Profit before Tax is currently valued at N2.83 billion, as against N6.94 billion achieved at the end of the 2018 half-year.
• Having made allowances for Tax Expense, the management of Okomu Oil reported a profit of N2.52 billion for the period, as against N5.94 billion last year. 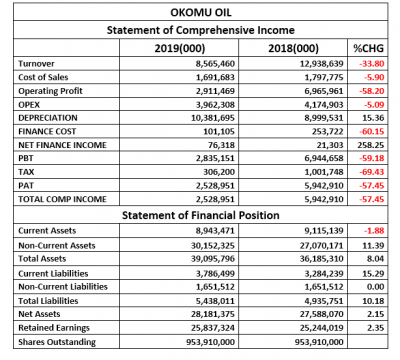 • Current Assets, at the end of the period under review, was N8.94 billion, same as 1.88% below the N9.11 billion assets valuation at the end of the 2018 half-year financial.
• Non-Current Assets, on the other hand, stood 11.39% above the corresponding period valuation at N30.15 billion, from N27.07 billion.
• Current Liabilities equally climbed 15.29% over the corresponding period to N3.78 billion versus N3.28 billion in the preceding half-year.
• The only item on the Non-Current Liabilities for the two periods compared is the Deferred Tax Liabilities and it was stable at N1.651 billion through the periods.
• Net Assets at the end of the period was estimated at N28.18 billion, which is only 2.15% above the N27.58 billion stated in its k2018 half-year result.
• Retained Earnings also inched marginally above the 2018 level at the currently stated N25.83 billion compared to the previous N25.24 billion.
Financial Strength/Solvency Ratios
• Okomu Oil’s Debt Ratio was stable at 0.14x through the two periods compared in this report.
• Total Debt to Equity Ratio was also fairly stable through the periods. We have estimated that Okomu’s total debt is the same as 19% of the equity value at the end of the period.
• We also estimated Equity Ratio at 0.72x, up from the 0.76x in 2018 half-year, which implies that the company’s equity is currently 72% of the Asset. In other words, more equity is used in the running and servicing of the business.
• Patronage in the shares of Okomu Oil seems low at the current beta value of 0.62x, this could be linked to the low shares outstanding of the equity.

Efficiency Ratios
• Measuring management’s ability, we have tested a few efficiency ratios
• Operating Expenses to Turnover Ratio was confirmed to stand at 46.26%, a 43.36%% efficiency drop from the previous estimate of 32.27%.
• Turnover to Total Assets was also considered. Thus, the company achieved a 38.73% drop in efficiency having moved from 35.76% to N21.91%.
• The Working Capital Turnover of Okomu oil could be considered low when compared to the estimate from industry peers’ numbers. Please note that the ratio dropped from 2.22x to 1.66x.
• Based on the general standard, the company Working Capital Ratio is Good at 2.36x, a drop from 2.78x estimated in the last half-year earnings, which is a confirmation that it will not experience difficulty settling its current liabilities, although the ratio should be watched since its dropping.

Investment/Valuation Ratios
• Compared to the previous half-year, the management of Okomu Oil earned N2.65 per unit shares, which is a 57.54% drop from the N6.23 half-year earnings achieved in 2018.
• Since the share price of Okomu Oil on the Nigerian Stock Exchange (NSE) has been stable over the two dates, half-year adjusted PE-Ratio increased to 19.61x from 8.35x, due to the large difference in earnings.
• Similarly, the half-year earnings are estimated to have yielded 5.10% of the price of Okomu Oil on the exchange as at the time the result was made available to the investing public.
• Presently, the estimated half-year Book Value of Okomu Oil per share stood at N29.54, 2.15% growth from the N28.92 of the previous half-year. Please note that the Book Value stood far below both the current market price and our fair value for Okomu Oil.
• Confirming the above is the estimated Price to Book Value that stood above unity.
• See the below table for details.

Valuation
As noted above, having considered the financial standing of Okomu Oil Plc, with conservative projections and good consideration of visible risk elements, we have fairly priced each unit of Okomu Oil at N57.43, and have rated it a Hold.