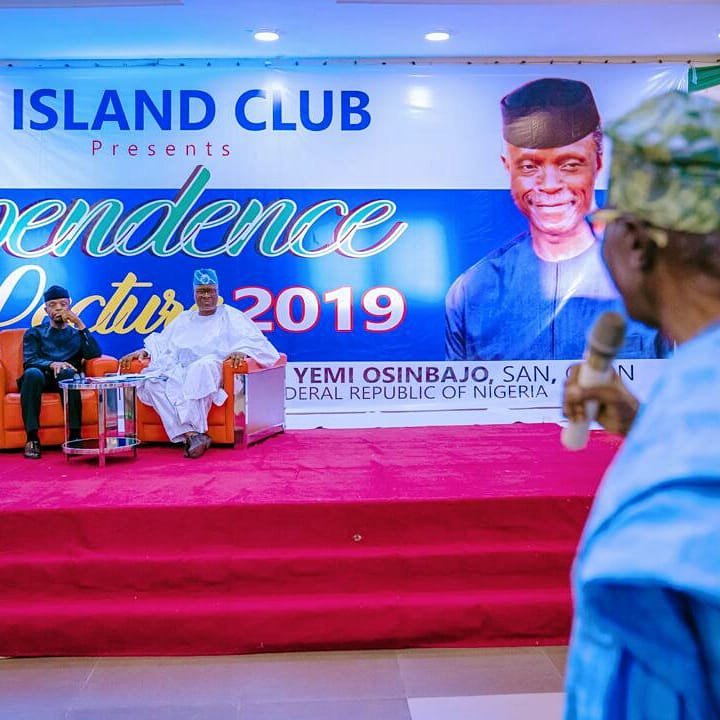 •Says ‘Resource Control’ Enhances National Productivity
Nigeria’s Vice President, Prof. Yemi Osinbajo, on Friday, rekindled the debate for autonomy and control of more resources by the nation’s 36 states, what have come to be known as “true federalism,” rather than the current quasi-unitary system of government.
He also agrees that in line with the promise of his All Progressive Congress (APC), under whose umbrella he came to the office for the second four-year term on May 29, along with President Muhammadu Buhari, that the time has come for Nigeria to have state and community police structure.
Prof. Osinbajo, who spoke at the 59th Independence Anniversary Lecture organized by the Island Club, Lagos, said what Nigeria needs today are “strong sub nationals led by visionary leadership (which) is what it takes to develop the Nation. What we require today is stronger, more autonomous States able to generate and control more of their resources and visionary leadership.”
For him also, according to a statement by Laolu Akande, Senior Special Assistant to the President on Media and Publicity, Office of the Vice President, Nigeria’s population and diverse ethnic groups makes it necessary that states in the country be strengthened to enable them to contribute more to national productivity and development.
This, he believes, can be achieved with “stronger, more autonomous States that are able to generate and control more of their resources.”
Speaking on the topic “the whole is only as great as the sum of its parts,” Osinbajo said the current administration of President Muhammadu Buhari is ensuring that states collaborate more with the Federal Government on different initiatives to improve visionary governance in the country.
“The most important transformative change we can make in Nigeria is to lift the majority of our people out of deprivation by speedily creating wealth and opportunity leading to the eradication of poverty,” he said.
He warned that no nation can “be wealthy when its component parts – the states – are poor. The standard of living of the federation depends on the standard of living of people who live in the states. In other words, the federation can only be as rich as its richest state and as strong as its strongest state. Our national indices merely aggregate the realities of our weaknesses and strengths as present in all our constituent units. Consequently, we can only build a stronger and more prosperous nation by building a stronger and more prosperous states.”
For him, therefore, “building stronger states means ensuring the devolution of more power to the states, enabling them to control more of their resources and make more of their own administrative decisions such as the creation of Local Governments, the establishment of state and community police forces as well as state correctional facilities; creation of special courts and tribunals of equivalent jurisdiction to high courts. The point I am making is that states must have more powers and more rights.” 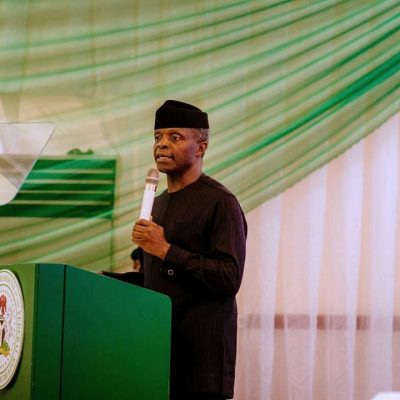 The challenges confronting Nigeria at this time, he continued, “are about strengthening internal coherence and cohesion. It is about moving from affirmations of unity to the achievement of synergy in which the sum of our strengths exceeds the totality of our constituent parts.
“Opportunities for smart and visionary governance abound. So, for example, while states may not be able, to right now, establish their police forces, they can collaborate with the federal government on initiatives such as community policing which also revolves around the idea of localized law enforcement. Our administration is currently pursuing this option. When we set our minds to solving problems, we will find that what is truly possible is not as distant from the ideal that we seek.”
Nigerians, he stressed further, must draw inspiration from its history of a commonly shared belief, so as to attain the quest for collective progress and continued unity, despite differences.
To achieve that, he urged all draw inspiration from the founding fathers of Nigeria– Nnamdi Azikiwe, Obafemi Awolowo, and Ahmadu Bello, who though differed on many things, shared a clear belief in Nigeria’s boundless capacity as a united country. Regardless of their keen rivalry, the trio agreed on the crucial necessity of Nigeria staying united, despite the many centrifugal pressures that buffeted the young nation. On this matter of unity, their differences were those of degree rather than category.
“Each of them occupied different niches on the spectrum of national integration but they all shared the view that the ideal situation was one in which a united and prosperous Nigeria took its rightful place in the world as the most populous black nation on Earth and as the foremost black power.
“From the foregoing, it is clear that the founding fathers were of one mind as far as Nigeria’s world-historic significance was concerned. They also recognized that her ability to fulfil her destiny was dependent on her continued unity.”