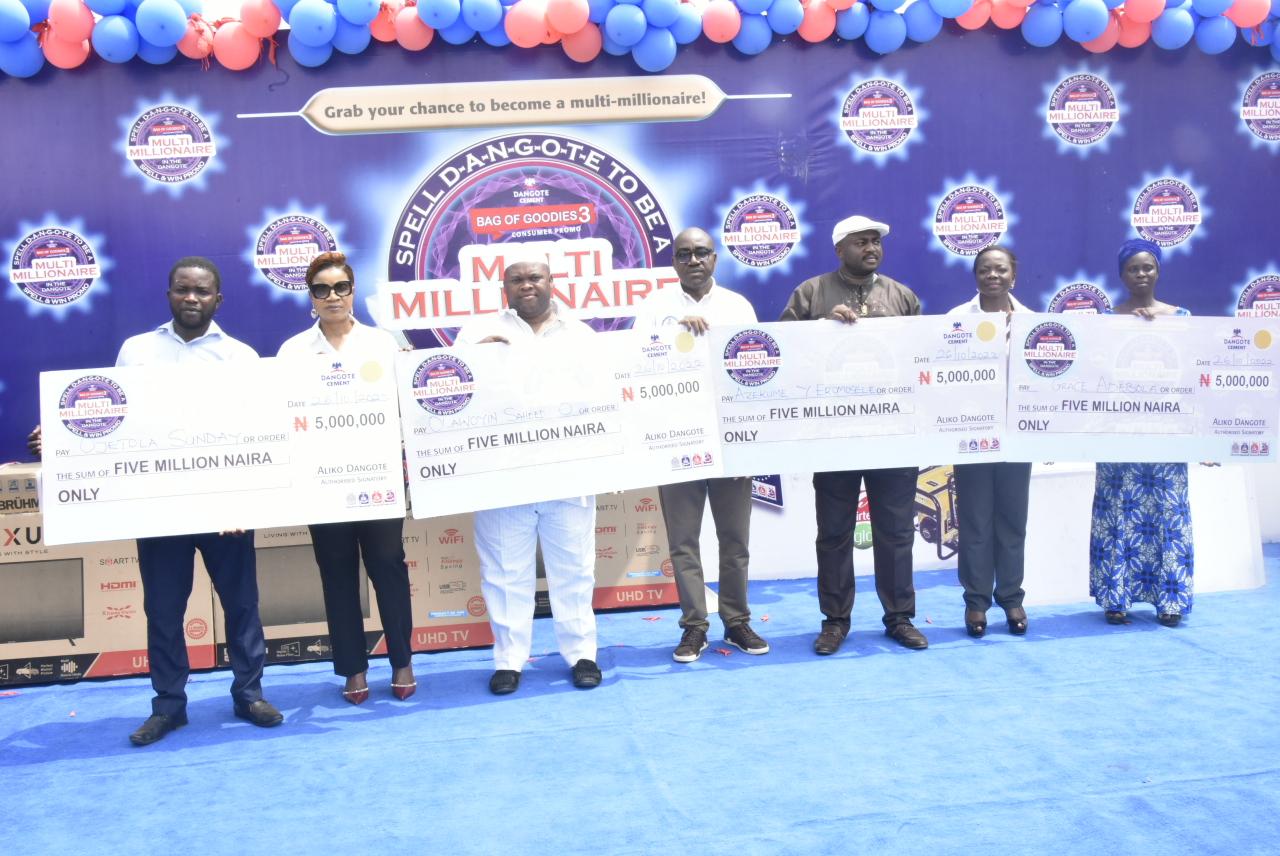 Over 100 loyal customers of Dangote Cement Plc emerged instant millionaires across Nigeria in the company’s Bag of Goodies Consumer Promo Season 3, as they were presented cheques and other gifts on Wednesday in Lagos alone.

Five of the lucky customers each emerged winners in the N5m mega reward category, while 12 others won N1.0m each respectively, while hundreds of others were also presented with consolation prizes like call cards, generators, freezers, fridges, fans, and air-conditioners, among others.

While the new millionaire costumers of Dangote Cement jubilate over their good fortune and windfall, the company assured in a statement that there are still better days ahead for other Nigerians, as the promo closes on October 31, 2022.

Speaking at the event, the National Sales Director, Dangote Cement, Mrs. Funmi Sanni said the promotion was to encourage continued patronage by customers, assuring that Dangote Cement is the best in the country, in terms of quality and product accessibility.

She said Dangote Cement values the consumers who are the end-users of her products.

According to her, “we are here to make more of our customers instant millionaires. This is part of our Corporate Social Responsibility (CSR) in empowering our customers and helping them build their respective businesses. The promo was conceived as a way to thank them for their support and patronage…

“If you, our customers refused to buy our products, we won’t have a choice than to close shops, but because you have been supporting our operations on a consistent basis, we are still in business and it is only normal for us to also give back to you, who are the reason why we are still in business…the Presentation of cheques and other gifts are being done across the country today and I am happy to inform you that we have done as we promised. The N1bn that was set aside for this promo will go round our customers and at the end of this Season 3 Promo, hundreds of our customers will be millionaires and multi-millionaires”

Explaining the impact of the prizes, she said that if a retailer or block moulder wins N5 million, he or she is now capable of buying about two more truckloads of cement, which will increase his capacity, create more business for him and even more hands will be required to manage the expanded business. She explained that Dangote Cement is creating more indirect jobs through the promo.

The winners explained that they initially doubted the genuineness of the promo until they saw that people are winning and their prizes are being given to them. They then thanked the management of Dangote Cement for the good gesture.

It would be recalled that the Pan-Africa Cement manufacturer had last July unveiled a “Spell Dangote and become Millionaires in a season 3 of its Bag of Goodies National Consumer promo,” in Lagos during which the company announced that 500 consumers would win a million naira each, while another 100 would win N5m within four months.