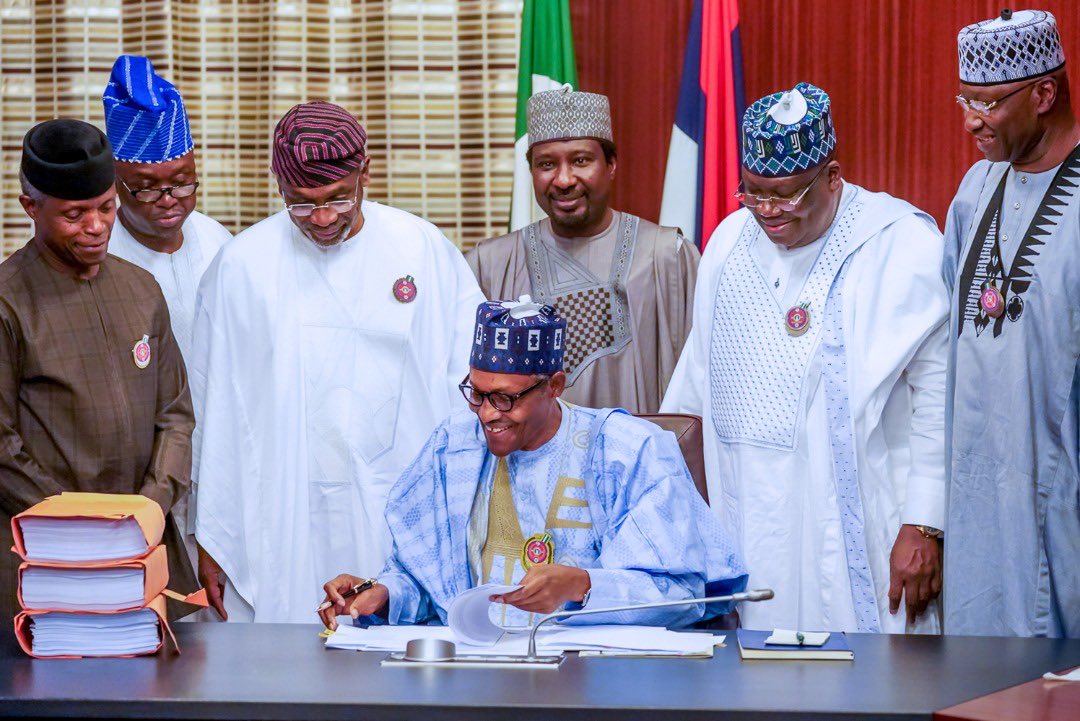 As promised by the Minister of Finance, Budget and National Planning, Mrs. Zainab Ahmed, Nigeria’s National Assembly, on Tuesday, received a request from President Muhammadu Buhari to amend the 2022 Appropriation Act passed in December last year, seeking appropriation of additional N2.557tr to fund the 18-month extension of the subsidy regime.

Recall that the subsidy on premium motor spirit, otherwise known as petrol ought to have been totally removed by July 1, this year, but for the outcry that greeted the plan.

The request, according to a statement, the Federal Government projects that total budget deficit in the 2022 fiscal year will “increase by N1.01 trillion to N7.40 trillion, representing 4.01% of GDP. The incremental deficit will be financed by new borrowings from the domestic market.”

It has become necessary, he stressed in the statement by Ezrel Tabiowo, Special Assistant (Press) to President of the Senate, was “to present this amendment proposal considering the impacts of the recent suspension of the Petroleum Motor Spirit (PMS) subsidy removal and the adverse implications that some changes made by the National Assembly in the 2022 Appropriation Act could have for the successful implementation of the budget.

President Buhari, in a letter dated February 10, 2022, and read during plenary by the Senate President, Ahmad Lawan[a1] , noted the imperative of removing all 139 of the 254 capital projects totaling N13.24bn identified as having been replicated in the 2022 Appropriation Act for deletion.

Investdata News recalls that BudgIT, a civic group that focuses on transparency in public finances, had in a January 22, 2022 statement said according to “preliminary analysis of the 21,108 capital projects in the 2022 approved budget, there are 460 duplicated projects amounting to N378.9bn in the budget.” This, it noted, was much more than the 316 duplicated projects inserted into the 2021 Budget approved by NASS. Of this number, the Independent Corrupt Practices Commission (ICPC) “verified 257 duplications, while the Budget Office confirmed the existence of only 185 duplicated projects worth N20.13bn, after which it informed the public that funds were not released for the projects in 2021,” the statement added.

Buhari, Tabiowo continued, therefore requesting “the National Assembly to amend the Appropriation Act to provide for Capital Expenditures in the sum of N106,161,499,052; and N43,870,592,044 for Recurrent Expenditures.

He underscored the need to reinstate four capital projects totaling N1.4bn in the Executive proposal for the Federal Ministry of Water Resources; and N22.0bn cut from the provision for the Sinking Fund to retire mature loans needed to meet government’s obligations under already Issued Bonds.

Continuing, he spoke of the need “to restore the titles/descriptions of 32 projects in the Appropriation Act to the titles contained in the Executive Proposal for the Ministry of Water Resources (see Schedule IV) in furtherance of our efforts to complete and put to use critical agenda projects.

“The Appropriation Amendment request is for a total sum of N106,161,499,052, for Capital Expenditures and N43,870,592,044 for Recurrent Expenditures. I therefore request the National Assembly to make the above amendments without increasing the budget deficit. I urge you to roll back some of the N887.99 billion of projects earlier inserted in the budget by the National Assembly to accommodate these amendments.

“However, following the suspension of the PMS subsidy removal, the 2022 Budget Framework has been revised to fully provide for PMS subsidy (see Schedule V). An additional provision of N2.557 trillion will be required to fund the petrol subsidy in 2022. Consequently, the Federation Account (Main Pool) revenue for the three tiers of government is projected to decline by N2tr, while FGN’s share from the Account is projected to reduce by N1.05tr. Therefore, the amount available to fund the FGN Budget is projected to decline by N969.09bn.