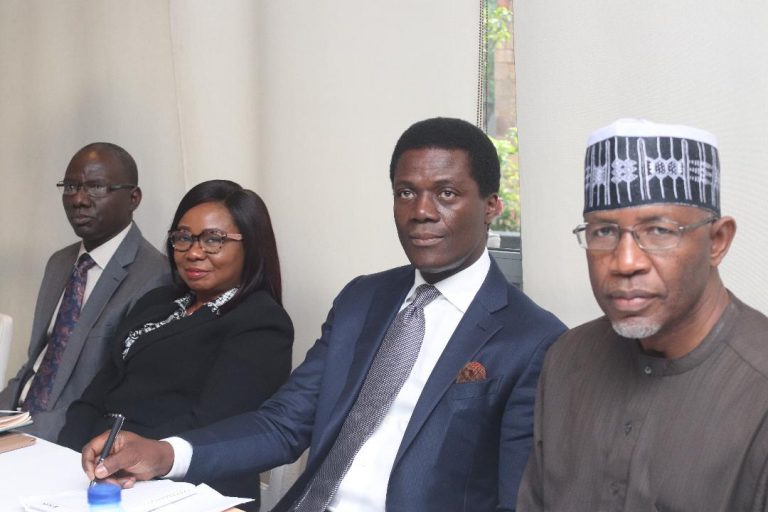 Last week, President Muhammadu Buhari shocked not a few stakeholders of the Nigerian capital market with the appointment of Lamido Yuguda, a board member, as the new Director-General of the Securities & Exchange Commission (SEC), subject to the approval of the Nigerian Senate.

Zubair, who until his appointment, Director, External Relations in the commission, had been queried and demoted by the then Finance Minister, Mrs. Kemi Adeosun on April 19, 2018, giving way for Uduk. The SEC under his watch was accused of regulatory sloppiness over the lifting, cancellation and second lifting of the technical suspension placed on Oando Plc’s share price on the Nigerian Stock Exchange (NSE) in barely 48 hours.

The confusing communications from SEC, according to Oluyinka Akintunde, Adeosun’s spokesman at the time in a statement, “adversely impacted market confidence.”

Yuguda’s appointment follows the formal expiration of the tenure of Gwarzo who had over the period of his suspension been in court, seeking to clear himself of the various allegations.

The Uduk Years: Cleansing the stable

What may now come to be known as Uduk years at the SEC will always be recalled with mix feelings of the good times, not so good, and ‘outrightly’ ugly times. While she was bold at some times, taking on some fights, there are others she abandoned after being enmeshed in political intrigues and legal tangles.

One war she prosecuted strenuously was that against ponzi schemes and impostors, which she chased all over the country in her bid to enhance market confidence.

The commission, under her watch, did not also spear capital market operators who betrayed investor confidence in any form, as they were weeded out and made to face the consequences of their actions according to the rule book.

Perhaps given reasons for going after those who brought the market into one form of disrepute or the other, Uduk recalled during a two-day international capital market conference, organized in collaboration with the Department of Finance, University of Lagos, that many operators had taken advantage of loopholes in market regulations to defraud investors in the past.

In answer to a question by a participant, she lamented that many private companies, in collaboration with operators, took advantage of gaps in Nigeria’s investment laws, especially between 2007 and 2008 to defraud investors. They had embarked on private placements, luring unsuspecting investors by promising to list the shares for trading on the Nigerian Stock Exchange (NSE), when in reality they had no such intention.

“Market operators encouraged private placements knowing that the law did not allow the SEC to regulate private companies,” she stressed, urging operators to “join hands and revive this market.”

Recall that the February 2009 “Report of the SEC Committee on the Nigerian Capital Market,” chaired Olutola Mobolurin, chairman of the Capital Market Master Plan, estimated that up to N650bn was raised via private placements involving as many as 300 transactions between 2004 and 2008.

One achievement the Uduk years at the SEC will be remembered for is her zeal for driving the commission, using the 10-Year (2015 to 2025) Capital Market Master plan, developed by stakeholders as a roadmap to position the capital market as an enabler of accelerated development of the Nigerian economy.

The Master Plan launched by the SEC in 2014, with over 100 initiatives, was built around four strategic pillars namely the need to drive and facilitate capital raising for sustainable national development and transformation of Nigeria’s key economic sectors. In the process, it will effectively contribute to growth, even as the commission seeks to align market structure to the needs of Nigeria’s economy while increasing scale, size and professionalism of all stakeholders.

The plan is also built around the promotion of fair competition by putting in place practices expected to improve transparency, efficiency and liquidity, while at the same time attracting sustainable interest in the capital market from domestic and foreign investors, as well as other participants.

For the SEC as apex capital market regulator, the master plan seeks to create an enabling and facilitative oversight and regulatory framework that supports the deepening and development of the market.

The plan is believed to have the potential to facilitate implementation of, while contributing its quota Nigeria’s economic growth and development agenda.

Two issues that the market will also remember Uduk and shareholders/investors grateful for are successful dematerialization of share certificates and payment of dividends electronically into the bank accounts of their beneficiaries, as ingrained in the Master plan. To know why, ask Nona Awoh, as well as Sir Sunny Nwosu, Adebayo Adeleke and Boniface Okezie, among other frontline shareholders their experience before this novel idea became a reality.

While the dematerialization process has since been completed with investors no longer worrying about loss or damage to their physical share certificates because they are now electronically stored at the Central Securities Clearing System, the e-Dividend process is work in progress. It is so, because although there are no new incidences of unclaimed dividend with the successful implementation of the electronic Dividend Mandate Management System (e-DMMS) launched in November 2015, there is, however need to ensure the legacy amounts are paid to their owners before they become statue barred.

At the end of January 2020, according to the commission, unclaimed dividends in the capital market stood at N153bn.

Also, the Direct Cash Settlement protects investors from funds diversion by ensuring that the proceeds from share sales are credited directly into the client’s account, rathr than that of the stockbroker.

Through its Commodities Trading Implementation Committee, the commission is engaging with the Standards Organizations of Nigeria (SON) to publicize the relevant standards issued for agricultural products, even with warehouses being mapped to provide information on their availability and location.

The SEC organised a roundtable in October 2019 and International Commodity Conference in March 2020, bringing together various domestic and international stakeholders on commodities to discuss and collaborate on areas that will showcase and unlock Nigeria’s potentials in the commodities space.

The commission is also working towards a future where the capital market would be used to solve challenges of commodity misprizing and non-standardization, as well as the low forex earnings bedeviling the country’s agricultural sector.

The commission has finalized the rules and other necessary frameworks supporting the introduction of the financial derivatives market in the Nigerian, a necessary product that can help in risk management, portfolio diversification, market depth and liquidity.

The need to expand the frontiers of literacy, which plays a significant role in financial inclusion and in the country, being a major component of economic development has attracted the SEC’s attention.

The commission has also commenced work on leveraging opportunities in the area of Financial Technology (Fintech) this opportunities to enhance efficiency, introduce new products and new platforms as well as supporting development of technology start-ups. The commission launched the Fintech Roadmap for the Nigerian Capital Market, with a dedicated committee working with other key stakeholders to implement the recommendations of the roadmap report.

Nigeria’s SEC continues to be accorded some international recognition, with the election of Uduk into the board of the International Organisation of Securities Commissions (IOSCO) to represent the Africa/Middle-East Regional Committee (AMERC) for a two-year period.

One issue Uduk is leave hanging as she exits the SEC Nigeria is last year’s aborted forensic audit conducted by Deloitte & Touche on energy giant- Oando Plc, with the commission directing the board of Oando Plc to convene an Extra-Ordinary General Meeting (EGM) before July 1, 2019, at which to appoint replacements for Jubril Adewale Tinubu and Omamofe Boyo, Group Chief Executive and deputy, respectively. Both executives were also barred from being directors of any public companies for a period of five years.

The SEC had accused Oando of serious infractions of securities and other relevant laws, including “false disclosures, market abuses, misstatements in financial statements, internal control failures, and corporate governance lapses stemming from poor board oversight, irregular approval of directors’ remuneration, unjustified disbursements to directors and management of the company, related party transactions not conducted at arm’s length, amongst others.”

The company then sought the protection of the court against the commission’s action, resulting in a seeming stalemate since then.

Reacting at that time, renowned capital market players and chairman of the maiden Nigerian Code of Corporate Governance, Atedo Peterside, had urged the commission to be transparent in its handling of the forensic audit.

The SEC-Oando stand-off began during the tenure of Dr. Zubair as acting DG, with Uduk, who replaced him, as well as Mrs. Adeosun, the then Finance Minister, accused by some shareholders of withholding the audit report.

But Nonah Awoh, a capital market analyst told investdata News that the decision to make the audit report public is that of the Federal Government through the Finance Minister, rather than Uduk or the SEC.

Uduk becomes the third female Director-General of the Nigerian SEC, of which only Ms. Arunma Oteh was substantive. The third female occupant of the office, also in acting capacity, was Ms. Daisy Ekinneh.

Recall that the Coordinating Minister of the Economy, and Finance Minister, Dr. Ngozi Okonjo-Iweala, had appointed Ibrahim Bolaji Bello, the most senior staff of the SEC as acting DG of the commission to replace Ms. Daisy Ekinneh, appointed by the SEC board to act for Ms. Oteh, who on Monday, June 11, 2012, proceeded on compulsory leave. This was to allow for more detailed investigation into how Oteh supervised the celebration of five decades of capital market activities in Nigeria, code-named “Project 50.”

The Task Before Yuguda

One thing market stakeholders will agree is that Ms. Uduk was able to run along with the baton without a lag time, because she simply continued from where those immediately before her stopped, rather than attempting to start a new agenda afresh.

It is important for the incoming executive management and the relatively new board at the SEC to ensure continuity. The commission is lucky this time as a full-fledged management prepares to take over at a time the board has been recently reconstituted, unlike since early 2015 when the then board chaired by Peter Obi, former governor of Anambra State was dissolved by the newly elected President Buhari, without a replacement. That was the situation that Gwarzo and his executive committee, and those all who acted after his suspension found themselves, with the commission forced to become another agency under the Federal Ministry of Finance, and the Minister its one-man board with the attendant challenges.

Meanwhile, there is need to sustain the tempo of the 10-Year Capital Market Master Plan, especially as it relates to further deepening and ensuring that the Nigerian market becomes a hub for the long-term capital needs of businesses, and for infrastructure and other innovative public financing.

This must not the time for anyone to reinvent the wheel under any guise, as the new management must hit the ground running for the good of the Nigerian capital market and economy.

As Uduk sings her Nunc dimities, activities of the next few days and weeks under Yuguda will tell whether there is indeed a brighter tomorrow for Nigeria’s SEC and the capital market. Will that tomorrow come? Only time will tell.