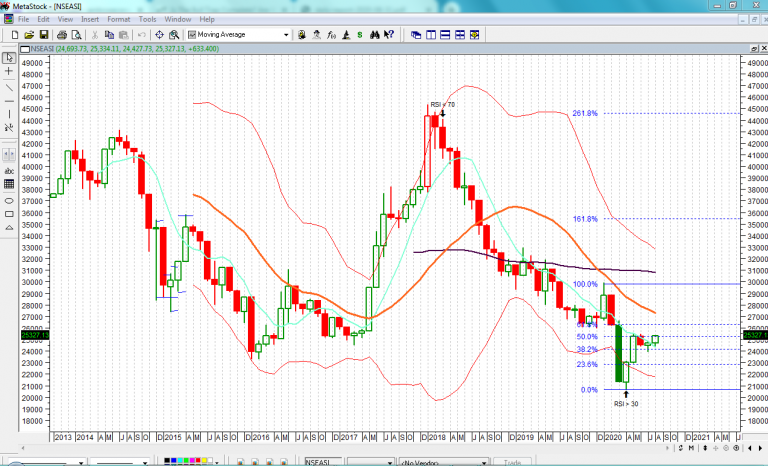 The nation’s stock market in August extended its recovery and bullish trend for the second successive month, following positive sentiments for better-than-expected half-year corporate earnings and bargain hunting as investors positioned for interim dividends from the big banks. Four of the banks, yesterday wrote to say they have been given further extension following delays from their primary regulator- the Central Bank of Nigeria (CBN) in approving the financials. The wait will now be for another one month (September end) as approved by the Nigerian Stock Exchange (NSE).

Also yesterday, the CBN approved the reduction in interest rate on savings deposits to a minimum of 1.25%, which is 10% of the 12.5% Monetary Policy Rate (MPR), which is also expected to reduce the funds in system and impact positively on the stock market.

With this recovery move witnessed in August, the market has successfully maintained a positive stance in July and August.

Meanwhile, the new month of September, being the concluding part of third quarter, will not only witness new positions towards the Q3 numbers expectedly, but also experience reactions to earnings from few listed equities yet to release their half-year numbers, especially the dividend paying banks.

Note that despite the ongoing disconnection of the market from the prevailing economic realities, the government and CBN are intensifying their intervention by extending bailout to other critical sectors like the media and aviation industries to mitigate the effects of the pandemic. This expected to further enhance economic recovery as shown by the weak macroeconomic indices. This will further support the stock market as companies in these critical sectors and others start bouncing back with better performance and stronger numbers.

Despite the nation’s inflation of 12.82%, negative Q2 GDP of 6.1%, and the marginal improvement in Nigeria’s Purchasing Managers’ Index (PMI) of 48.5 points, from the July position of 44.9 points, and with COVID 19 cases still being reported but at a much slower rate, investors’ buying interest and sentiments remain positive. This can be linked to the grossly undervalued state of Nigerian stocks at this time, even as the low interest rates continue to support the market, despite the high outflow of foreign investors and exchange market problems that need urgent attention.

The bull-run during the month of August was obvious in the 21 trading sessions of the month, as the market closed positively in 16 days, and was down in five sessions to extend the previous month’s positive outlook. It also reduced the year-to-date loss suffered by the NSE’s All-Share Index to 5.64%, owing to the low price attraction, positive reaction to earnings and high yields in equity assets. Despite the economic challenges and others, many stocks remain attractive, offering high margins of safety and upside potentials.

Meanwhile, during the month under review, the key performance All-Share index gained 633.40 basis points, closing at 25,327.13 basis points, after touching a high of 25,334.11bps and low of 24,427.73bps, from the 24,693.73bps it opened for the month, representing a 2.57% growth. This came with a strong buy-market position that impacted prices of high cap stocks, thereby supporting the uptrend witnessed during the month.

The buying volume of total transactions for the month was 99%, while selling position was just 1%,while volume index for the period was 0.75. Market capitalisation for the month gained N331.22 bn, closing at N13.21tr, from an opening value of N12.88tr, representing a 2.57% value gain.

The market sustained a positive sentiment and mixed trend for stocks, especially with the improving oil prices, expectation of interim dividend and investors going defensive with stocks that have strong yields to hedge against rising inflation in the midst of a stronger US$ and depreciation of the Naira against other currencies.

Traded volume for the month was up by 12.11% to 4.72bn shares from 4.21bn units in the month July, even as market breadth for the period was positive with gainers outnumbering losers in the ratio of 63:44. This reflected on the benchmark index and other sectorial indices that closed higher in the period under review.

The sectoral performance chart below shows that the NSE Oil/Gas, Insurance, Consumer goods andBanking indicesdrove the market the in the month under consideration with gained of 12.18%, 7.57%, 6.07% and 4.73% respectively to outperformthe NSEASI in the period.

Other sectoral indexes closed lower during the month, led by the NSE Industrial goods which lost 1.85%, followed by the Premium Board that slide by 0.45%.

August’s best performing stocks were University Press, which gained 63.37% on full-year earnings expectation and the dividend of 15 kobo; followed by FNT Cocoa, that appreciated by 30% on market sentiments despite the negative financials and irregularity in the publication of its scorecards. Insurance companies, Lasaco and AXA Mansard followed with 29.17% and 27.78% respectively; while Seplat chalked 24.11%.

Among the month’s top gainers were: Neimeth Pharmaceutical, 24%; Unilever, 22.45%; Stanbic IBTC, 20.17%; Nigerian Breweries, 19.35%;and Fidson Healthcare, 17.78%, among others. As previously reported, the gains by Unilever and NB may not be unrelated to their parent companies Unilever Overseas and Heineken BV to increase their stakes following their inability to repatriate their dividends owing to lull in the Nigerian foreign exchange market.

The worst performing stocks, on the other hand, were Consolidated Hallmark Insurance, and UACN which recently announced a change of mind, deciding to sell its majority stake in UACN Property Development Company to another core investor, instead of previous arrangement of distributing holding to existing shareholders and even after a successful rights issue. Consolidated lost 24.44%, UACN, 18.57%; Arbico shed 17.99%; ABC Transport 17.02% and and Mutual Benefits, 13.04%. Custodian Investment shed 12.73% as a result of its interim dividend price adjustment, just as C & I Leasing lost 10%; followed by Beta Glass, 9.99%; and Conoil, 9.76% on the back of declining earnings performance and negative sentiment for the sector.

Speculative traders and sentiments have pushed the market into a short-term overbought region and perfect bull trap as the NSE composite index formed a double top chart pattern on daily, weekly and monthly time frame. This clearly signals warning of an impending price correction, before any retracement in the new month.

The symmetrical triangle chart pattern also supports continuation of current trend or pullback depending on market forces and news, now that savings account interest has further crash by CBN directive to the banks starting from today.

Investors and traders should stay very cautious with their investments throughout the end of 2020 and beyond, by having good entry and exit strategies at all time.