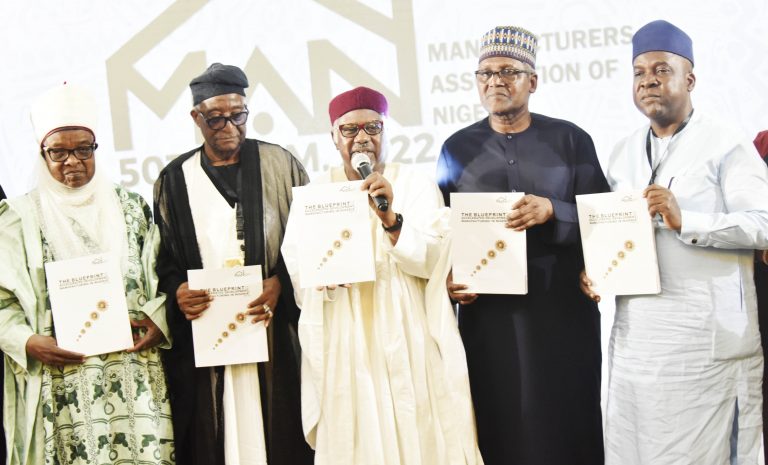 President of the Dangote Group, Aliko Dangote, on Tuesday in Lagos challenged the Federal Government to strategically prioritize investments in infrastructure, if it must take the Nigerian economy to its desired level among contemporary nations and globally.

Against the background of the declining fortune of the manufacturing sector, Dangote, who was Guest Speaker at the 50th Annual General Meeting of the Manufacturers Association of Nigeria (MAN) and 2nd Adeola Odutola Lecture, expressed optimism that with the collective effort of all stakeholders, it is feasible to move Nigeria from “developing nation” to “newly industrialized nation.”

This is, he assured, is possible within a decade, if the nation formulates “plans and policies that will enhance and sustain industrial development,” a target he believes involves putting in place a conducive environment that encourages investment and ensures efficient use of resources to raise national productivity and growth.

Achieving this, he stressed, will require the Federal Government prioritizing investments in infrastructure and core industries, among others, as a way of taking the nation’s economy to its desired level among contemporary nations and in the world overall.

It is imperative, he continued, that the familiar challenges limiting the pace of industrialisation are frontally addressed while setting a clear-cut agenda for the next 10 years, identifying priority investments in infrastructure and core industries among other recommendations.

At the AGM, themed: “An Agenda for Nigeria’s Industrialization for the Next Decade”, where a Blueprint for the Accelerated Development of Manufacturing in Nigeria 2.0 was unveiled, the foremost entrepreneur identified various measures needed if Nigeria must speed up her industrialization and development growth. They include investment in infrastructure; creation of business-enabling Policy Framework; development of core industries; macroeconomic stability; facilitation of sectoral linkages and sustaining of the federal government’s recent efforts at ensuring security of lives, properties and investments across the nation.

He also advocated jail terms for dealers in foreign textile materials to discourage imports and boost local production in the textile industry, calling for the enactment of a law prohibiting the sale of imported fabrics in the country.

In his review of the performance of Nigeria’s industrial sector, Dangote identified the nexus between industrialization and economic development with Nigeria and China as case studies. He analyzed the Nigerian manufacturing sector with focus on its growth trajectory, current status and challenges, setting an agenda for the next ten years with an implementation roadmap.

According to him, “the experience in various parts of the world has shown that industrialization drives economic growth & development, which improves living standards as evident by the high output and per capita income in industrialized countries.

“The rate of industrialization in Nigeria has been slow as evidenced by the low contribution of manufacturing to GDP, poor capacity utilization and constrained export of manufactured products within and outside the continent. For instance, Nigeria’s share of world output of 0.41%, ranked 29th in the world which is unimpressive, considering its size and resource endowments. It ranks poorly, when compared with India at (3.1%), South Korea (3.0%) and China (28.7%).

“Nigeria’s industrialization process has been greatly challenged by structural and institutional constraints, particularly funding. These factors have over the years cumulatively contributed to its disappointing performance. For instance, in the last decade, average share of manufacturing value added to GDP in countries like China and Malaysia stood at 41% and 38% respectively; compared to 25% in Nigeria.”

Dangote also noted that, “the drive to transform Nigerian into an industrialized nation has been a consistent goal of successive governments since independence. It is therefore, imperative that we focus on sectors with great potential for inclusive growth. Sustainability must be central to our industrial development agenda.”

Governments at all levels, he stressed, must consult widely with relevant stakeholders when taking far reaching decisions on key sectors of the economy, a situation that will enable manufacturers to make long-term business plans.

In addition, he called on government to back policies that have been “tried- and- tested” with enabling legislation to “make them less susceptible to arbitrary changes by successive governments.

Industrialization, when driven by manufacturing, he stressed, “has the capacity to facilitate enduring economic growth. The transition mechanism entails the availability of required resources, adoption of appropriate technology, provision of favourable operating environment, human capital development, stable macroeconomic environment and adequate infrastructure. With the collective effort of all stakeholders, it is feasible to move Nigeria from “developing nation” to “newly industrialized nation” status within the next 10 years.”