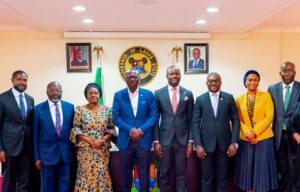 Receiving the board and management of NGX led by the Chief Executive Officer, Temi Popoola, who came on courtesy visit to his office on Thursday, he expressed confidence in the opportunities available in the capital market and indicated an interest in deepening synergies between the State and The Exchange.

According to Popoola, “at NGX, we are eager to reaffirm our commitment to collaborating with Lagos State Government on its infrastructure development drive through our robust platform available to fund strategic objectives.

“This is particularly important to us given the critical position Lagos state occupies as the Centre of Excellence and the major economic hub in of Nigeria and Sub-Saharan Africa. NGX has always been a strong collaborator through which the state accesses long-term developmental funding from the capital market evidenced by the ₦224.54bn Lagos State Bonds listed on NGX – cumulatively the largest subnational bond listed on the NGX platform. We, therefore, look forward to exploring more opportunities especially in infrastructure financing, environmental and climate bonds, and capacity building,” he added.

Capital market stakeholders, the NGX said in a statement continue to look forward to outcomes from the series of strategic engagements NGX has facilitated with key players across the public and private sectors, which are geared towards the development of the capital market and the Nigerian economy at large.