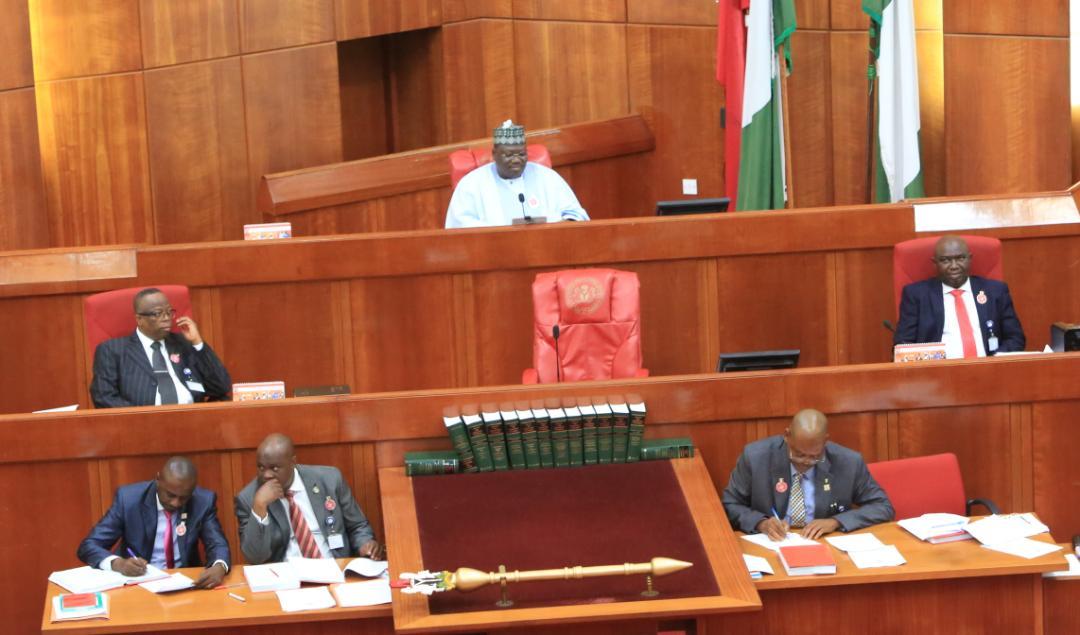 Post Views: 213 •Goes After Oil Companies Over Oil Spills The Nigerian Senate, on Wednesday, mandated its Committee on ICT and Cybercrime to engage st...

•Goes After Oil Companies Over Oil Spills
The Nigerian Senate, on Wednesday, mandated its Committee on ICT and Cybercrime to engage stakeholders to fashion a broad-based approach to address Nigeria’s digital and cybersecurity crises.
The upper chamber while calling for engagements with Ministries, Departments, and Agencies of government to identify cybersecurity constraints and remedial measures, bemoaned a situation where Nigeria lost N250bn to Cybercrime activities in 2017 alone.
Sponsor of the motion, Senator Yakubu Oseni (APC, Kogi Central), lamented that the country is already plagued with the destructive cyber-crises and urged the Federal Government to improve on budgetary provisions for digital technology and cyber-dependence safety.
He warned that “the gains of digital technology are being dampened by the rapid evolution of cybersecurity threat, with increased attacks in both sophistication and severity,” adding that the cyber-related activities are already costing the world huge losses in trillions of dollars.
These were resolutions reached after consideration of motion on “The Growth of Digital Technology and the Challenge of Cybercrime,”
He recalled that the 2018 annual report of the Nigeria Deposit Insurance Cooperation (NDIC) as indicating that there were 37,817 reported fraud cases within the year, out of which 59.2% was internet and technology-based.
Yakubu added that 81% of cyber-security incidents in the country are either unreported or unresolved, leaving room for proliferation and escalation of illicit cyber activities.
“Nigeria still lags behind in infrastructure sophistication, data Management and digital security which are critical to the developmental agenda.
“In fact, federal allocation to the ICT sector of the economy can only be considered as lip service, compared to the enormity of challenges,” the lawmaker said.
Continuing, he stressed that “global ransomware damage alone has been predicted to cost the world over $11bn in 2019 and $20bn in 2021.
“It is also predicted that a business will fail every 14 seconds in 2019 and 11 seconds in 2021, and that overall Cybercrime is predicted to cost the world over $6tr annually from 2021,” Yakubu said.
Meanwhile, the senate, also on Wednesday, directed its Committee on Petroleum (Upstream) to begin a comprehensive review of relevant laws governing abandonment, decommissioning and remediation with a view to establishing the level of compliance by oil companies operating in the country.
The upper chamber also charged the committee to call for a comprehensive account of allocations in their annual budgets for mandatory abandonment and decommissioning, running into billions of dollars unaccounted for.
It further called for further investigations as to how budgeted allocations for this purpose were applied or expended over the years.
These formed part of resolutions reached by the upper chamber sequel to the consideration of motion on “the need to investigate the degree of enforcement of Abandonment and Decommissioning Obligations in Oil and Gas Exploration Contracts.”
Senator Gershom Bassey (APC, Cross River South), who sponsored the motion, drew the attention of the upper chamber to the United Nations Convention on the Law of the Seas Art 60(3), the Geneva Convention Article 5(5), the Oslo and Paris Convention for the Protection of Marine Environment, the 1967 Territorial Water Act and 1969 Petroleum Act.
According to him, such laws make sufficient provisions for mandatory abandonment and decommissioning for oil companies, bemoaning the conduct of oil companies in Nigeria for “failing to restore exploited sites after the expiration of their lease as witnessed in the Niger Delta.”
He added that at the point of transfer of interest by one company to another, “there is lack of clarity in many instances with regards to financial liability for abandonment and decommissioning thereby causing untold hardship to the host community.”
Contributing, Senator Stella Oduah (PDP, Anambra North), a co-sponsor of the motion, described the same as “critical”, given how degradation affects host communities under oil exploration.
Oduah noted that the incidence of spills was preventable if only funds set aside for the purpose of clean-ups are duly utilized.