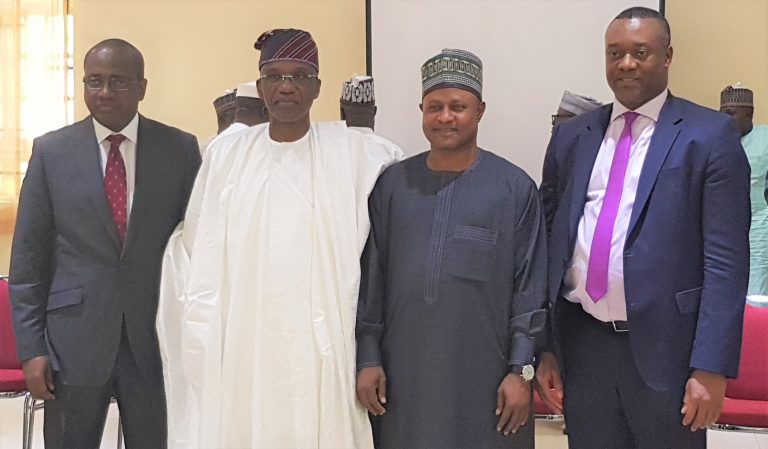 Chairman of the Senate Committee on Banking, Insurance and other Financial Institutions, Senator Uba Sani, on Wednesday in Kaduna assured that the upper chamber would partner the Asset Management Corporation of Nigeria (AMCON) in a bid to sustain the war against recalcitrant debtors.
Speaking at the opening of the 2019 retreat for members of the Senate Committee on Banking, Insurance and other Financial Institutions, in Kaduna on Wednesday, Sani said recovering the huge AMCON debt, he stressed, has become a major burden for which the National Assembly will consider all options, including reactivating the Failed Bank Act, and at some point inviting the pioneer management of AMCON under the leadership of Mustapha Chike-Obi to come and explain to Nigerians what they did during their tenure.
He described the debtors as economic saboteurs that must be made to repay the over N5tr outstanding debts, stressing that the National Assembly will continue to support AMCON by providing all legislative supports. This could include a further amendment of the AMCON Act, if need be, to enable the corporation to recover the huge outstanding obligation.
He said the red chamber will bring up several motions that will enlighten the public on the real dangers of non-recovery of the debts to the economy, adding that besides providing such support, the Senate will step on toes as far as the recovery of these national assets is concerned.
Describing AMCON as a “strategic national institution,” Sani said the senate was happy that AMCON, which the government created in 2010 as a key stabilizing and revitalising tool to revive the financial systems by effectively resolving the non-performing loan assets of the banks has done well in that assignment.”
The agency, he continued, is now faced with the challenge of recovering the huge obligation before the end of its lifespan, especially now that the federal government is looking for funds to develop infrastructural shortage across the nation.
According to him, the red chamber’s determination to help AMCON recover this huge debt is buoyed by the body language of the executive arm of government and the stance of President Muhammadu Buhari, who has shown executive support. This, he noted, was demonstrated through the signing of the AMCON Amendment Act 2019 into law.
“The good news is that the Federal Government under the leadership of President Muhammadu Buhari is now waging a sustained battle against wreckers of the economy. It is determined to bring defaulters to book by strengthening the legal framework that set up AMCON and giving it all the support, it needs to succeed in its daunting task.
“Aside from the senate, AMCON needs the support of all government agencies and indeed all Nigerians to succeed. Our society must say no to the growing culture of collecting loans and regarding such loans as one’s share of the national cake. This is absurd and intolerable. Our judiciary must also assist the corporation in speedily recovering assets. That will send a clear message to other intending defaulters that the era of impunity is over.”
The committee chairman said that the retreat was convened to discuss the way forward for AMCON’s recovery activities in line with the new amendment, which has provided it with sweeping powers to go after the obligors, stressing that the upper chamber, as part of its oversight function, has decided that AMCON must be fully supported to achieve its statutory objectives as expected by the Federal Government and indeed all Nigerians.
Also speaking, Ahmed Lawan Kuru, Managing Director/Chief Executive of the Asset Management Corporation of Nigeria (AMCON) said the agency has so far over N1tr, representing 61% of Eligible Bank Assets (EBAs) it purchased for N1.7tr.
Giving an overview of the corporation’s activities, Kuru submitted that the ramifications for failure by AMCON to recover its debt, principally owed to the Central Bank of Nigeria (CBN), cannot be quantified. This, he noted, is because it goes beyond the economic cost alone.
This level of recovery, he however noted, is an outstanding achievement when compared to the success rate of other asset management agencies around the globe.
That notwithstanding, however, he argued that the National Assembly still has a lot of work to do, if AMCON would deliver on its mandate before its sunset, which is around the corner.
There were also presentations on AMCON’s Financial Status by its Executive Directors of AMCON, Aminu Ismail; Dr. Eberechukwu Uneze, ED, Sales, and Management of Assets, spoke on the journey and the challenges; while Joshua Ikioda, AMCON’s Group Head, Enforcement, made a presentation on “our journey so far (Portfolio Update).