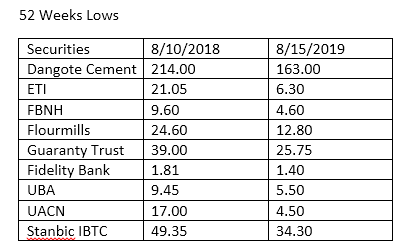 Market Update for August 15
The negative stance of the Nigerian Stock Exchange (NSE) seems unending these days, with Thursday’s session turning out very volatile while breaking down the 27,000 basis points psychological line on a mixed sentiment and relatively high volume.
There was however a relative slowdown in the loss momentum of the composite NSE All-Share index, just as buying interest improved as revealed by Investdata’s Daily Sentiment Report, showing ‘buy’ volume at 70% and sell position at 30% of the total daily transaction volume index of 1.13. This is an indication that discerning investors and bargain hunters are gradually accumulating at the current prices, realizing that many stocks have hit their 52-week, five and 10-year new lows, making the Nigerian stock market a buy one after it had suffered 22.37% loss in one year, 14% year-to-date and 2.4% month-to-date, respectively, signaling ‘buy’ opportunities. This is however despite the prevailing low liquidity befalling the market and economy due to the seeming lack of economic direction and non-implementation of the 2019 budget. We, however, expect that the assigning of portfolio’s and assumption of office by the Minister-designates will trigger action and eventual governance before the end of this quarter.
At the current state of the Nigerian equity market, it is only positive news in the form of a reassuring statement from the government and improved liquidity that can change the narrative and serve to trigger a rebound, with corporate earnings so far revealing that the listed companies are not looking too good. Their position is somewhat confirmed by the emerging mixed economic data such as the July Purchasing Managers Index (PMI() at 57. 6 points, June consumer price index at 11.22%, Q1 GDP of 2.01%, representing a decline from the 2.38% Q4 2018 level, even as external reserves remain at $44.38bn, amidst the oscillating oil price. These have glaringly told the story of the Nigerian economy in the face of looming global recession as bond market yield become messier on daily basis, while the supremacy battle between the U.S and China, the world’s two largest economy rages unending.
Meanwhile, the benchmark NSEASI opened on Thursday trading on the downside, a situation that was extended till midday and early afternoon on selloffs among the high cap stocks, before retracing by the mid-afternoon after touching intraday lows of 26,895.43bps from 27,120.09bps, before closing the day marginally lower at 27,052.93 basis points.
Market technicals were negative but mixed as traded volume was lower than the previous session in the midst of negative breadth. The momentum behind the day’s performance was seriously weak as Money Flow Index read a mere 0.00points, down from Friday’s 5.89bps, an indication that funds left some stocks and the market despite the seeming buying interest.

Index and Market Cap
At the close of Thursday’s trading, the All-Share index lost a marginal 30.18bps to close at 27,052.93bps, after opening at 27,083.11bps, representing a 0.11% decline, just as market capitalization shed N14.71bn, closing at N13.18tr, from an opening value of N13.2tr, which also represented 0.11% value loss.
Attention: If you haven’t signed up for Investdata buy and sell signal setup, don’t delay. We have just added another risk management feature and new favorite stocks of the most revered traders and investors in corporate Nigeria to our watchlist, these stocks are with double potentials. To become a member, send ‘YES’ or ‘STOCKS’ to the phone numbers below. Take advantage of this service to buy right and sell right during this new lows and post Q2 earnings reports portfolio reshuffling and repositioning ahead of fiscal and monetary policy catalysts.
The day’s decline was due to selloffs in stocks like Dangote Cement, Guaranty Trust Bank, Lafarge Africa, ETI, UACN, Access Bank, FBNH, UBA, Unilever, Stanbic IBTC, FCMB, Fidelity Bank, Flour Mills and Custodian Investment, among others. This impacted negatively on the NSE’s Year-to-Date loss, which heightened to 13.93%, just as YTD market capitalization gain reduced to N1.46 trillion or 12.48% from the year’s opening level of N11.72tr.

Bearish Sector Indices
The sectoral performance indexes were in red, except for the NSE Oil/Gas that was flat, while the consumer goods index led the decliners’ after losing 1.13%, followed by Banking index with 0.86%, just as Insurance and industrial goods were next by 0.85% and 0.18%respectively.
Market breadth remained negative as decliners outnumbered advancers in the ratio of 23:9; market activities were mixed as traded volume was down by 0.82% at 233.2m shares from the previous day’s 235.12m units, while value rose by 10.64% to N3.64bn, as against the previous day’s N3.29bn. This volume was driven by trades in financial services and conglomerates stocks such as Guaranty Trust Bank, Transcorp Plc, Access Bank, Fidelity Bank, and Zenith Bank.
The best-performing stocks for the session were CCNN and Unity Bank which gained 9.43% and 7.81% respectively, closing at N14.50 and N0.69 per share, on the back of improving earnings despite enlarged outstanding shares and market forces. On the flip side, Unilever and ETI lost 10% each to close at N28.80 and N6.30 on market selloffs and bearish trend.

Market Outlook
We expect the mixed performance to continue as selloff persists in the absence of positive news and economic stimulus, despite the mixed economic indices and the seeming fair position corporate earnings due to prevailing low market value, as investors continue to reshuffle their portfolios in expectation of interim earnings reports of dividend-paying companies. Also, we see bargain hunters taking advantage of the-low prices stocks, as economic indices seemingly look positive.
Discerning investors should target value stocks considering the current low valuation to position for dividend income and capital gain, especially as the market’s Price to Earnings ratio is 5.12x, which is well below the 8.01x average of its peers and a five-year average of 9.56.x. This revealed value and high upside potentials for a rally. But wait to confirm reversal before jumping into a new position.
They may also take into consideration the expected economic reforms as the government is set to assign portfolio to the minster-designates, just as Central Bank of Nigeria (CBN) had earlier rollout it plans to boost productivity and investment by instructing the banks to lend more to the private sector. This is aimed at reducing banks’ participation in government securities and lending more to the private sector to drive economic growth.
There is also the likely impact of portfolio repositioning for the last quarter of the year ahead of Q3 financials in the midst of analyzing Q2 numbers and unfolding political events.