Post Views: 1,073 United Bank for Africa Plc recently released its earnings report for the first quarter ended March 31, 2018, which was a continuatio...

United Bank for Africa Plc recently released its earnings report for the first quarter ended March 31, 2018, which was a continuation of the trend seen in the 2017 full-year, especially the increasing contribution from its African subsidiaries. This, among others, showed that the group’s pan-African investment over the years is beginning to bear rich fruits for the good of investors, besides diversifying its earnings and profit
Already, the group’s board and management’s commitment to delivering value and boosting earnings power has reflected on the share price and dividend payout, resulting from the strong asset quality and increasing diversification of its sources of its profit.
Specifically, the group achieved 43% and 47% of top and bottom-lines respectively, while at the same time mitigating the impact of the falling interest rate and low yield environment in Nigeria which may continue when the Central Bank of Nigeria (CBN) eventually cuts the benchmark Monetary Policy Rate (MPR).
Ahead of such eventuality, inflation rate at 13.34% has consistently fallen and is now below the 14% MPR. There is also the high possibility of the April inflation rate coming even lower. Analysts and economists expect consumer price index for April to range between 12.70% and 12.95%, thereby piling pressure on the CBN’s Monetary Policy Committee (MPC) to ease rates.
Meanwhile, UBA Plc opened the new financial year, with gross earnings rising by 17.9% from N101.25bn in 2017 to N119.37bn; faster than the slim 6.2% growth in after tax to N23.74bn, from N22.35bn in 2017. Bottom-line was eaten up by increased operating expenses, interest and non-interest expenses, especially when income from trading in fixed income securities and others are falling.
In addition to the implementation of IFRS 9 that made compelled the bank to restate its opening equity balance downward, even when the loan loss charge fell by 53.1% due to the loan book clean-up. UBA’s operating expenses was up by 12.86% to N49.68bn from N44.02bn in 2017 which slashed net profit margin by 9.88% from 22.07% in 2017 to 19.89%. This is impressive, as it reflects cost management efficiency above the 15% international standard. Also, Earnings Per Share for the period limped to 69 kobo from 68kobo in 2017.
The 69 kobo first quarter earnings per share is a replica of the price in 4.03x, which is higher than the 2.07x recorded last year. Book Value for the period grew by 9.85% to N15.72 from N14.31 in 2017. Deposits-Loan and advances ratio is 1.83 and equity multiplier, 7.99 for the period. The improving customer relationship and recovering business environment will impact bottom line and further reduce provision for bad loan. 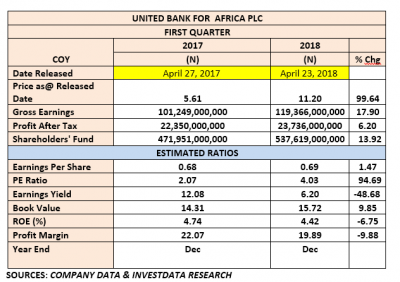 The bank’s shareholders urged management to extract more value from its increasing presence outside Nigeria, as well as the improved service delivery network to further boost performance in the current financial year and deliver N100bn after tax profit. If achieved this will change the banking and investing public perception of UBA Plc, given that perception of financial service providers, as well as their products and numbers is expected to drive share price and sustain positive earnings as value becomes the real factor to go after.
Technical View
The bank’s price action has formed a rising channel for more than two years and has recently pulled back to touch the lower line of the bullish channel on April 20, 2018 before retraced up. Its share price is still trading below 20—50-Day Moving Average. Positive sentiments on its strong numbers and expectations from the expanding drive of the bank has supported this level. The possibility of pullback is high as profit taking by traders and investors is imminent, given that political risk remains a major concern of every investor.

Valuation
UBA’s current share price is considered very attractive at trailing 6.13x of earnings. Its recent financials and upgrade of the 2018 full-year guidance are indicative of expected strong performance that continues to deliver on expectations. The bank is trading at Q1 2018 Price/Book ratio of 0.71x and Price/Earnings of 4.03x. Meanwhile, the Book Value reveals an underpriced situation as its trades below N15.72, representing 34.36% margin of safety. Thus, each unit of UBA is fairly priced at N18.00.

Analysts Opinion/Recommendations
The strong performance of the bank on quarterly basis supported its 100% price appreciation between released date in 2017 and the price it closed on Friday, May 4, 2018. This had outperformed the general market returns within same period. On the strength of reported Q1 numbers, the bank’s full year EPS is projected to be in the region of 258 kobo. 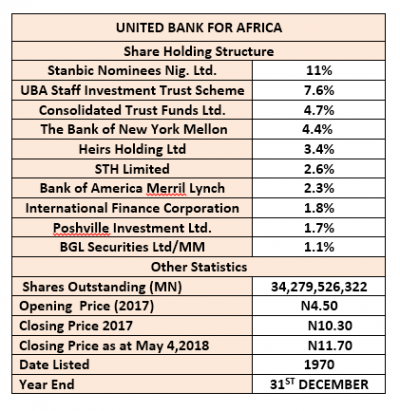 The bank’s strong assets quality and healthy balance shows the commitment of its leadership to managing risk and repositioning its services to enhanced profitability, following which the board hopes to reward investors handsomely in the nearest future is increasing.
Performance in Four Years (2014-2017)
Looking at the bank’s numbers for the period under consideration, it has remained resilient, despite the tight and mixed economic conditions especially since the crash in oil prices and its recovery moves that continue to reflect on the declining inflation rate in oil producing countries. It also impacted economic activities which is one of the factors driving the global growth.
UBA Plc’s top line for the period grew by 59.15% to N461.56bn from N290.02bn in 2014, even as after tax earnings remained stable and upward looking, despite the over regulation in the industry with banks having to make different provisions. This is especially following the adoption of IFRS 9 and the unstable economic situation to record 64.04% growth from N47.91bn in 2014 to N78.59bn.
Book Value for the period had been in the up direction from N8.05 in 2014 to N15.48 in 2017 to indicate constant improvement in profitability that has impacted positively on shareholders fund which grew by 92.30%. Profit margin for the four-year period has been moving up and down but remaining above the 15% international standard. Return on Equity was 14.84% in FY-2017 down from 16.13% in 2015, while Return On Assets experienced a marginal decline for the same period to 1.93% from 2.06% Year-on-Year

Ratio Analysis
Investment and profitability ratios of the bank have been mixed for the period under consideration. Its earnings power has been trending up to support price performance as well. EPS moved from N1.45 in 2014 to N2.30 in 2017, just as Price to Earnings Ratio remained unstable due to the up and down movement of the equity price. In arriving at our fair value for the stock, we focused on its historical financial performance and our expectations for full-year 2018 and beyond.
Our Fair Value for UBA shares was calculated using the Price to Book Value method of valuation as well as the Dividend Discount Model comprising our expected dividend estimate for the bank and to adjust for the risk of investing in the Nigerian Financial Services sector. We have placed a buy rating on the stock of UBA. 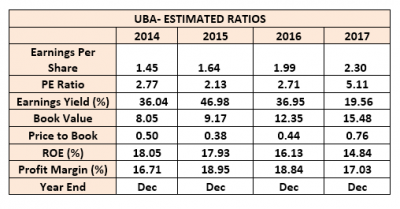