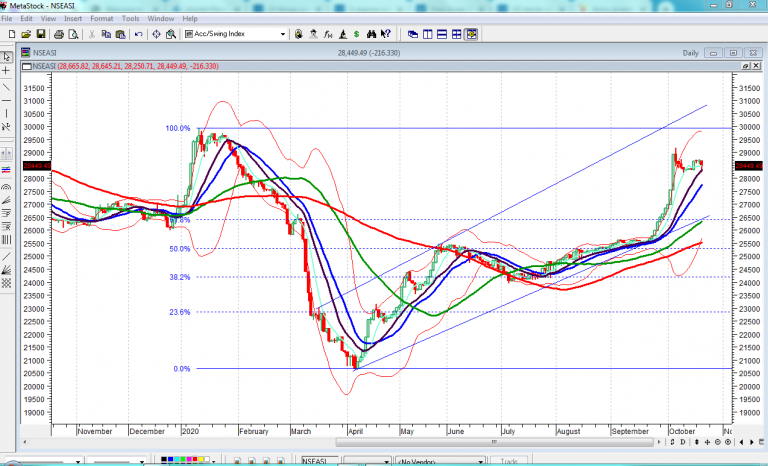 Equity prices on the Nigerian Stock Exchange (NSE) suffered huge loss at the midweek, halting the previous session’s gains and market rebound from its March-lows as it hits a major speed bump on a very high volatility.

This followed panic selloffs in the midst of ongoing earnings reporting season, as investors reacted to events of what has now been tagged Black Tuesday, when soldiers fired live bullets at #EndSARS protesters, resulting in alleged fatalities. The Lagos State Governor, Babajide Sanwo-Olu, however says although there were many injured protesters and a single victim who died later in the hospital, a claim disputed by survivors. Analysts have interpreted Tuesday’s night’s military attack on the unarmed #EndSARS protesters, as further worsening the nation’s political and currency risks, just as it worsened the crisis going by the carnage and destruction of properties belonging to government and private business premises belonging to ex-Governor Bola Tinubu, including media houses. The media houses- Television Continental which was gutted by fire, destroying equipment estimated at about over N3bn, throwing 450 workers out of jobs; in addition to The Nation newspaper that was also burnt down. The level of destruction will also have huge implications on the insurance sector in the country, as players and their reinsurers could be hit by huge claims, especially for the private sector victims, given that most government assets, including buildings and vehicles are hardly covered.

The increased tension and insecurity in the nation, especially the destructions in Lagos, the nation’s economic and financial capital have elongated the anticipated period of its recovery from the 6.1% negative GDP as of 2020Q2. This is has also been worsened by the policy mismatch and lack of coordination between the fiscal and monetary authorities, major concerns for local and international investors over the years.

Tension induced pullback or price corrections in the face of prevailing low interest rate regime and yields in fixed income market will, however, create repositioning opportunities for discerning investors who are always on the lookout for a theme that will provide them an opportunity to buy low.

The NSE index, on Wednesday broke down the seven-day moving average which is the shortest average to test the 14-DMA and retracing up on a low traded volume and mixed sentiments.  The handling of the ongoing crisis by the government will determine how far and this pullback will last considering the earnings season.

There were also presentation of corporate earnings by the managements of Africa Prudential, NCR Nigeria and Austin Laz, showing mixed performance, even as that of African Prudential was marginally down, when compared to 2019.

Meanwhile, Midweek’s trading opened on the downside and was sustained till midday, before oscillating late afternoon on selloffs, despite the inflow of earnings to the market, which pulled the composite NSE All-Share Index to an intraday low of 28,250.71 basis points, from its high of 28,645.21bps. Thereafter, the index closed lower at 28,449.49bps on a negative breadth.

Wednesday’s market technicals were negative and mixed as volume traded was higher than the previous session, in the midst of breadth that favoring the bears on a mixed sentiment, as revealed by Investdata’s Sentiment Report showing 50% ‘buy’ volume and 50% sell position.

Total transaction volume index stood at 0.89 points, just as the energy behind the day’s performance remained relatively strong, as Money Flow Index printed 69.04 points, from the previous day’s 74.04 points, an indication that funds left some stocks and the market.

Attention: If you have not signed up for Investdata buy and sell signal setup, don’t delay. We have just added another risk management feature and new stocks of most revered traders and investors in corporate Nigeria to our watchlist. These stocks are with double potentials to rally considering their current market prices.

To become a member, send ‘YES’ or ‘STOCKS’ to the phone numbers below. Take advantage of this service to buy right and sell right at the current market recovery ahead of Q3 earnings reporting season portfolio reshuffling and repositioning as we await an economic reform policy to stimulate and re-track the economy again.

Performance indexes across the sectors were largely bearish, except for the NSE Insurance that closed in the North by 0.57%, while the NSE Banking led the decliners after losing 1.70%, followed by Industrial Goods, Oil/Gas and Consumer Goods indexes which were down by 0.34%, 0.30% and 0.13% respectively.

Market breadth turned negative as decliners outweighed advancers in the ratio of 34:5, while transactions in volume and value terms were up by 9.84% and 44.35% respectively, as investors traded 326.58m shares worth N4.22bn, from 297.31m units valued at N2.93bn. Volume was boosted by trades in UBA, Zenith Bank, GTBank, Transcorp and FBNH.

We expect this volatility to continue, as investors exit positions to hold cash in the midst of Q3 earnings reporting season and sociopolitical risk, in the midst of crude oil price oscillation.

The mixed intraday movement is likely to persist for the rest of October in the midst of expected earnings, profit booking, as well as the mismatchedin economic policies and negative macroeconomic indices. This is also against the backdrop of the fact that the capital wave in the financial market may persist in the midst of relatively low-interest rates in the money market, high inflation, negative Q2 GDP of 6.1% and unstable economic outlook for the rest of 2020 as government and its economic managers are going front and back with mismatched policies and implementations.

Also, investors and traders are positioning amidst the changing sentiments in the hope of improved liquidity and positive economic indices which may reverse the current trend.

We see investors focusing on portfolio adjustment and rebalancing by targeting companies with strong potentials to grow their Q3 earnings and dividend on the strength of their earnings capacity as the year last quarter is at the corner.