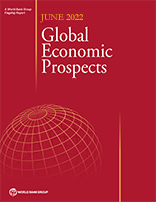 The World Bank Growth recently released its Global Economic Prospects report, showing that Nigeria’s economy could grow by as much as 3.4% this year, down from 3.6% estimated for the previous year, before dropping further to 3.2% where it is further forecast to stabilize in the following year.

Nigeria’s economy, the largest on the continent, will outperform its main rival- South Africa, which is expected to close at 2.1%, a significant drop from the previous year’s 4.9%, from which it would slide first to 1.5% in 2023, before rising to 1.8% by the following year.

The World Bank report noted that following the 4.2% rebound in 2021, growth in Sub-Saharan Africa (SSA) has weakened in 2022 on the back of domestic price pressures, partly induced by supply disruptions arising from the war between Russia and Ukraine, that continue to hinder food affordability and real incomes, especially in low-income countries (LICs).

There is also a possible “faster-than-expected slowdown of the global economy, which could be triggered by the accelerated policy tightening in advanced economies and the global resurgence of the COVID-19, would hurt many SSA commodity exporters. Much tighter financial conditions in EMDEs would raise borrowing costs and the risk of debt distress. Fiscal space, already constrained by high levels of public debt, could narrow further if spending pressures to curb the impact of rising food and fuel prices continue to build up. Finally, persistent domestic inflation could speed up monetary policy tightening, escalating stagflation risks across the region.”

As a result of the damage from the COVID-19 pandemic, and the Russian invasion of Ukraine which has magnified the slowdown in the global economy, it is now entering what could become a protracted period of feeble growth and elevated inflation, according to the World Bank’s latest Global Economic Prospects report, growth is expected to slump from 5.7 percent in 2021 to 2.9 percent in 2022— significantly lower than 4.1 percent that was anticipated in January. It is thereafter expected to hover around that level over 2023-24, as the war in Ukraine disrupts activity, investment, and trade in the near term, pent-up demand fades, and fiscal and monetary policy accommodation is withdrawn.

As a result of the damage from the pandemic and the war, the level of per capita income in developing economies this year will be nearly 5 percent below its pre-pandemic trend.

Specifically, growth in SSA is expected at 3.7% this year and 3.8% in 2023 – on par with its January projections. Yet, excluding the three largest economies, growth was downgraded by 0.4 percentage points both in 2022 and 2023. Although, elevated commodity prices would underpin recoveries in extractive sectors, in many countries rising inflation would erode real incomes, depress demand, and deepen poverty.

Growth in Low Income Countries was revised down by almost a full percentage point this year as food price inflation and food shortages are expected to take a particularly severe toll on vulnerable populations, further worsening food insecurity in those countries.

The report projects that the growth slowdown in Sub-Saharan Africa could also intensify pandemic-induced losses in per capita incomes, even as “the region is now expected to remain the only Emerging Market and Developing Economy (EMDE) region where per capita incomes will not return to their 2019 levels even in 2023.

“In about 45% of the region’s economies and in half of its fragile and conflict-affected countries, per capita incomes are forecast to remain below pre-pandemic levels next year. Surging food and fuel import bills could also reverse recent progress in poverty alleviation across the region, especially in countries where vulnerable populations are sizable (like Democratic Republic of Congo, Nigeria), and dependence on imported food is high (Benin, Comoros, The Gambia, Mozambique).

“Growth in the three largest SSA economies—Angola, Nigeria, and South Africa—was an estimated 3.8% in 2021 supported by the 4.9% rebound in South Africa. Growth momentum carried on in Angola and Nigeria, where high oil prices, the stabilization of oil production, and recovery in non-resource sectors supported activity in the first half of this year.

“Nevertheless, persistently high domestic inflation, power cuts, and shortages of food and fuel have been weighing on recoveries. In South Africa, growth has moderated substantially amid policy tightening, high and rising unemployment, and recurring power shortages. Infrastructure damage to the country’s main port following severe floods has also exacerbated supply chain disruptions related to the war in Ukraine and lockdowns in China. Elsewhere in the region, the boost from a waning of the pandemic and a gradual rebound in tourism is being muted by rapidly rising living costs and weakening domestic demand. In some countries, debt distress, policy uncertainty, social unrest, and violence still hamper recoveries, especially in fragile and conflict-affected LICs.

The report also identified what it termed predominantly downside risks to the outlook such as “the prolonged disruption to global trade in cereals and fertilizer due to the war in Ukraine would significantly worsen affordability and availability of staple foods across the region. In addition, insecurity and violence pose a threat to the outlook, especially in LICs, while rapid increases in living costs risk escalating social unrest.”

A statement by the World Bank Group quoted President David Malpass as saying “the war in Ukraine, lockdowns in China, supply-chain disruptions, and the risk of stagflation are hammering growth. For many countries, the recession will be hard to avoid.

“Markets look forward, so it is urgent to encourage production and avoid trade restrictions. Changes in fiscal, monetary, climate and debt policy are needed to counter capital misallocation and inequality.”

The June Global Economic Prospects report, the statement added, offers the first systematic assessment of how current global economic conditions compare with the stagflation of the 1970s—with a particular emphasis on how stagflation could affect the emerging market and developing economies. The recovery from the stagflation of the 1970s required steep increases in interest rates in major advanced economies, which played a prominent role in triggering a string of financial crises in emerging market and developing economies.

Also commenting, said Ayhan Kose, Director of the World Bank’s Prospects Group, explained that “developing economies will have to balance the need to ensure fiscal sustainability with the need to mitigate the effects of today’s overlapping crises on their poorest citizens.

The current juncture resembles the 1970s in three key aspects: persistent supply-side disturbances fueling inflation, preceded by a protracted period of highly accommodative monetary policy in major advanced economies, prospects for weakening growth, and vulnerabilities that emerging market and developing economies face with respect to the monetary policy tightening that will be needed to rein in inflation, the statement added.

However, the ongoing episode, it stressed, also differs from the 1970s in multiple dimensions: the dollar is strong, a sharp contrast with its severe weakness in the 1970s; the percentage increases in commodity prices are smaller; and the balance sheets of major financial institutions are generally strong. More importantly, unlike the 1970s, central banks in advanced economies and many developing economies now have clear mandates for price stability, and, over the past three decades, they have established a credible track record of achieving their inflation targets.

Global inflation is expected to moderate next year, but will likely remain above inflation targets in many economies. The report notes that if inflation remains elevated, a repeat of the resolution of the earlier stagflation episode could translate into a sharp global downturn along with financial crises in some emerging market and developing economies.

The report also offers fresh insights on how the war’s effects on energy markets are clouding the global growth outlook. The war in Ukraine has led to a surge in prices across a wide range of energy-related commodities. Higher energy prices will lower real incomes, raise production costs, tighten financial conditions, and constrain macroeconomic policy especially in energy-importing countries.