Nigerian stocks retraced up after the Christmas holidays on the back of increased buying interests in consumer goods, ahead of year-end portfolio rebalancing and window dressing, resulting in a mixed performance during the three-day week. The benchmark Nigerian Stock Exchange All-Share Index (NSEASI) closed lower, after hitting a new 52-week low at 26,018.13 basis points on selloffs in heavyweights like MTN Nigeria and Guaranty Trust Bank, among others.

The expected year-end rally may not be over yet either, as the recent NSE Index and price action could attract even more new buyers, once the short-term oversold situation burns itself out.

As shown in the chart pattern and candlestick formation during the three trading sessions, the NSE’s benchmark index hit its bottom in the two-year bearish channel, an important annual floor trader support level (S2). In the process, it formed a double bottom chart pattern with the index touching the lower band of the Bollinger bands, signaling an imminent reversal of trend, relative to performance which ushered the NSEASI’s downtrend in 2018.

With just two trading sessions remaining before the New Year holiday on Wednesday, it is now certain that the year 2019 would close in negative territory as the ASI continues to fall. After losing 18% in 2018, and with two sessions to go, the NSEASI has lost 15.74% year-to-date, bringing cumulative loses for both years to 33.74%.

Positive sentiments are, however, expected to dominate equity assets in 2020, given the prevailing low valuations with the hope for an improved macroeconomic environment in the new year, supported by the 201 full-year earnings performances. We, therefore, expect to see increased positioning by portfolio investors and traders with medium-to-long-term objectives.

The undervalued state of the nation’s stock market as revealed by the 6.54% average dividend yield, while the 6.74x Price to Earnings Ratio, makes its attractive as an investment destination, compared to those of the 22 largest economies in the world. its global counterpart.

It may come as a surprise that the United States currently has the second-lowest yield at just 1.83%, better than India’s 1.19%, a market currently trading at 29.63x earnings, while Russia currently has the highest dividend yield of 6.23% and the lowest valuation with a P/E ratio of just 6.68. This was despite being the second best-performing equity market in 2019, with its benchmark index rising by over 43% year-to-date. There are nine other countries with a dividend yield below the global average of 3.23%.

Given that interest rates remain historically low around the globe, and holding constant the varying levels of risk between a country’s stocks and bonds, equities generally continue to offer investors a higher return.

The low money market interest rate regime and increased lending to the real sector arising from the 65% Loan to Deposit Ratio required by the Central Bank of Nigeria at the end of this year, it is expected that over N2.2tr worth of new bank credits will flow into the economy. This will significantly boost the economy when combined with the expected multiplier effect of the early passage and signing of the 2020 budget capital expenditure early in the new year.

We, therefore, do not see the need for Naira devaluation; instead, the CBN should maintain price stability and target growth in sectors capable of attracting foreign inflow, especially if the country’s infrastructural development improves and impacts the life of Nigerians. There is also the need for government to have a rethink and obey court orders, while respecting the rule of law, thereby enhancing investor confidence.

Despite the down market during the period under review, positive sentiments trailed dividend stocks with low traded volume as a result of the two-day Christmas holidays.

The NSE index opened the week negative, losing 1.10% on Monday as selloffs hit high cap stocks such as telecommunication giants, defying the expected Santa Claus rally. The situation was extended to Tuesday when the composite Index shed 0.60% on sell down, as the market reacted to the downgrade of Nigeria’s economic outlook. This trend was reversed Friday, gaining 1.25%, ahead of the year-end rally, bringing the week’s total decline to 0.41%, worse when compared to the 0.04% loss recorded in the preceding week.

Many equity prices remained unchanged during the week, with day traders playing on low priced stocks that rallied, following which market breadth stayed positive, as advancers outpaced decliners in the ratio of 31:17. The impetus behind the week’s performance was down as revealed by the Money Flow Index reading 47.33bps, down from 52.63bps in the previous week.

The week’s trading pattern showed that accumulation is still ongoing, ahead of the 2019 full-year earnings reporting season expected in the 2020Q1, with the hope of markup in dividend-paying stocks with high yields and strong earnings capacity underway. Also, the Investdata Sentiment Report for the week revealed a positive strong demand, with ‘buy’ volume at 78%, and ‘sell’ position of 22%, on a transaction volume index of 0.42.

The mixed and positive sentiment behind the recent trading pattern of the NSE Index revealed an increased number of day traders and at the same time indicates that recovery is underway, as index action double bottom formation supports reversal, which is a function of market forces.

It will also depend on players’ taking advantage of low prices to position for full-year earnings reporting season as the economy is expected to sustain its recovery moves as liquidity to drive expansion in the system is available. The daily and weekly candlestick patterns signal short-term reversal ahead of year-end window dressing by fund managers and quoted companies.

On a weekly time frame, MACD has remained bullish as the composite NSE index sustained up and down movement that signals the possibility of recovery as demand for stocks continues to look up in the midst of selloffs.

In both the time frame, the NSE benchmark index is trading below 20 and 50-Day Moving Average as it tested a new 52 weeks low on low traded volume. The Relative Strength Index read 35.02, indicating relative strength, despite being in the oversold region. However, money flow is reading 47.33 points and looking down on the weekly chart.

The week’s sectorial performance indexes were bullish, except for the NSE Industrial Goods and Banking, which closed 0.31% and 0.26% in the red respectively, while the NSE Consumer Goods Index led the advancers, after gaining 4.76%. The NSE Insurance index grabbed 1.42%, followed by the NSE Oil/Gas that rose 0.71%.

Market activity in terms of volume and value for the week were down by 46.38% and 54% respectively, as stockbrokers crossed 735.7m shares worth N7.13bn, as against the previous week’s 1.38bn units valued at N15.5bn. Volume was driven mainly by trades in Access Bank, Law Union, and Zenith Bank.

Also on Friday, Dangote Cement announced plans to buy back up to 10% of its shares in issue over a 12-month period (READ MORE). It, therefore, becomes the second company on the Nigerian Stock Exchange to announce a planned buy-back, exactly 10 years after Custodian Allied Insurance repurchased 5% shares in issue in 2009, becoming the first in the history of the NSE, today the company’s share price and performance are outstanding in its sector and industry.

Nahco and AG Leventis were the best-performing stocks, topping the advancers’ chart, after gaining 12.31% and 10.30% respectively, to close at N2.40 and N0.55 per share on the low price attraction and repositioning of Nahco’s operations. There is also the for AG Leventis, as its core investor seeks to buy-out the minority shareholder at 0.59 kobo per share and thereafter delist from the bourse. It was for this reason that the NSE placed the company on full suspension preparatory to being delisted. On the flip side, May and Baker and Cornerstone Insurance lost 9.81% and 9.51% respectively, closing at N1.93 and N0.38, on profit-taking.

Being the week that ushers in 2020, we expect mixed performance to persist, in expected positive macroeconomic indices and continued positioning for new year expectations by market players. This is just as more liquidity finds its way to high dividend yield stocks with sound fundamentals, which will also be based on the seemingly positive outlook for the domestic economy, despite what the rating agencies are saying.

Discerning investors, nonetheless, should take advantage of the current low stocks valuation to position for medium to long-term. It is noteworthy that the market is selling at a discount and therefore offers high upside potential. 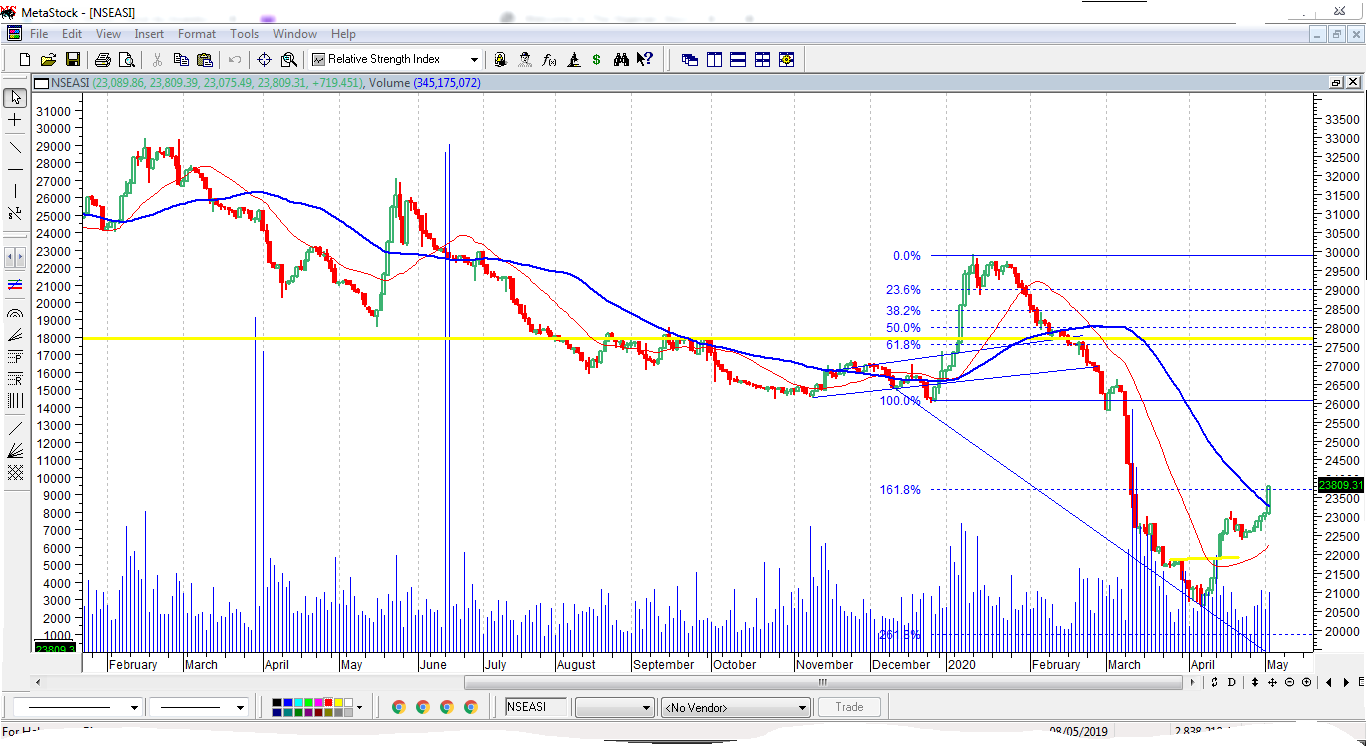 Corporate Actions As At Friday, October 4, 2019