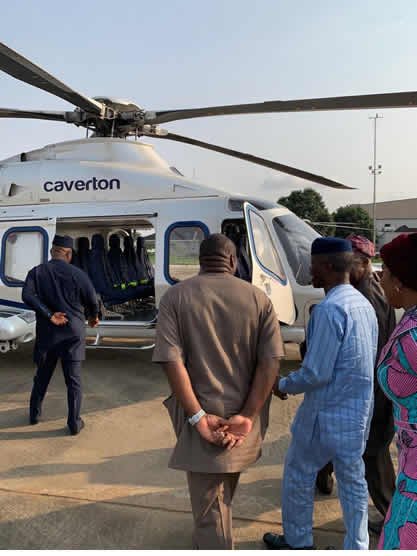 Makanjuola, who spoke on the sidelines of the ongoing Nigerian Oil and Gas (NOG) Conference, noted that the firm was also now heavily involved in the maintenance of fleets belonging to the Nigerian armed forces, in addition to unveiling a 40-seater prototype water bus, which will support its marine transport, especially across coastal areas in the country.

The CEO explained, according to a notice by Amaka Obiora, the Company Secretary, that the company holds about 60 to 70% market share in Nigeria, adding that when it noticed that the aviation sector was struggling with maintenance and training, it built the first ever maintenance, repair and overhaul centre in Lagos.

Nigerians, he continued, do not have to fly any of their aircraft out of the country for major repairs anymore, since the company is able to take an aircraft apart, work on it and put it all back together.

“One of the interesting things is that we do that for our entire fleet and we now do third party as well. So, the Nigerian Navy, Nigerian Air Force and even the Presidential fleet of Benin Republic actually use our services. The idea is to create a hub in Sub Saharan Africa for this sort of operation,” he stressed.

The CEO noted that when the firm first started operations, 80% of all its pilots were expatriates, but that today, 75 to 90% are Nigerians.

Continuing, he said because a lot of the boats in the country were of low quality, and in a bid to enhance safe water travel, Caverton came into the market to change the narrative.

“We were able to build our first prototype boat which is oil industry standard, meaning that it is very safe and we are very proud of it as it is our newest project.

“It can also be used as a crew boat for the International Oil Companies (IOCs). We are looking at all the riverine areas, we have got people interested in this in Akwa Ibom, Rivers, among others,” he added.

On aviation services which Caverton started in 2004, the CEO said because Nigeria lacked Maintenance Repair and Overhaul (MRO), facility, it has now built the first one.

On the issue of training, Makanjuola said the firm bought the first simulator facility for helicopter training.

“An hour on this simulator is an hour flying and it is really for people who want to learn how to fly,” he said.

He added that the diversification of the firm would address traffic congestion in parts of the country while moving people around safely.

“We were able to build our first prototype boat with oil industry standard and applications which could be used as crew boat for the IOCs and other oil producers in Lagos, Delta and other areas,” he stressed. Recalling the beginning of the firm in Nigeria, he said the offshore logistics company operated both in aviation and marine in 1999 with Shell Petroleum Development Company (SPDC) and began Nigerian Liquefied Natural Gas (NLNG) LPG distribution programme in 2004.

According to him, it moved into the aviation space with the support of Nigeria Content Development and Management Board (NCDMB) and Shell and was able to break into that market of which it currently holds a large share“We first got into helicopter because we realised that there were no Nigerians in that sector and we conquered. We realised that aviation sector was struggling with MRO facility as well as training, so we built the first business repair and overhaul centre in Nigeria,” he stated.