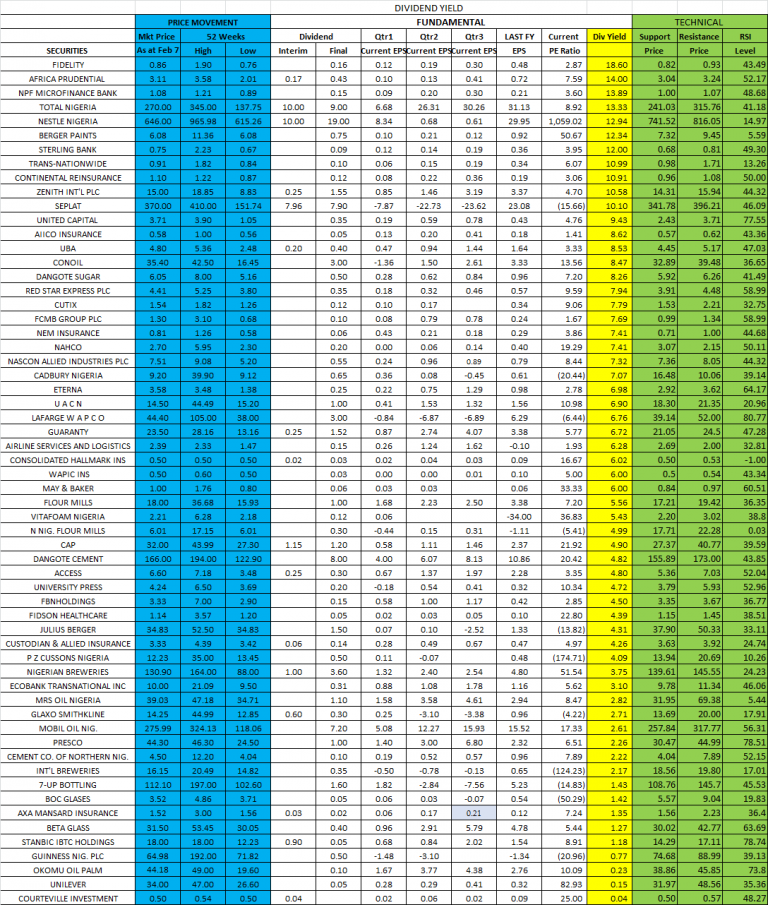 These companies are not large or medium cap equities. They are categorized as small, but with strong and growing earnings capacity for the long term, with potential to outperform the market with the right focus by their management to deliver value for income investors and traders that are farsighted enough to build their tent with such stocks as part of their medium to long-term investment goal.
At a time when more than 80% of stocks listed on the floor of the Nigerian stock exchange have somehow revealed an inability to pay dividend owing to their declining earnings capacity and as in the case with quite a handful of them- loss before and after tax, due to the negative impact of the nation’s economic recession on the sectors of the economy they operating in.
As a result of the recession, only players in the financial and services sectors have shown relative resilience as shown in their third quarterly earnings report, while most of the small caps stocks are in greens and even displaying potentials to further grow their earnings going forward.
The marvelous dividend yield of the small cap equities selected by INVESTDATA Research and listed here-under, boast of above market-average dividend yields of 4%, besides offering better returns than Treasury Bills and on other fixed income securities that offer an annual return of 21% per annum (an estimated 5.25% in 90 days).
In less than two months, these stocks have yields above 5.25% between the mark down and payment date in the fixed income market.
Consequently, market timing and money management become more important for financial and fund managers, including investors and traders as the earnings season draws even closer just as inflation figure for January is expected to influence investment decision this week and beyond.
However, despite the relatively low risk in investing in small caps stocks, one must not fail to mention the equally high risk of exiting quickly, due to low volume, which remains a major problem associated with some of them.
This can, nonetheless, be managed when you avoid the temptation of being greed that comes from setting reasonable returns target that allows you to exit before the party is over, thereby avoiding the usual stampede.
Don’t overlook penny stocks now, check out this list of 10 small cap stocks that you can add to your portfolio for dividend and capital growth.