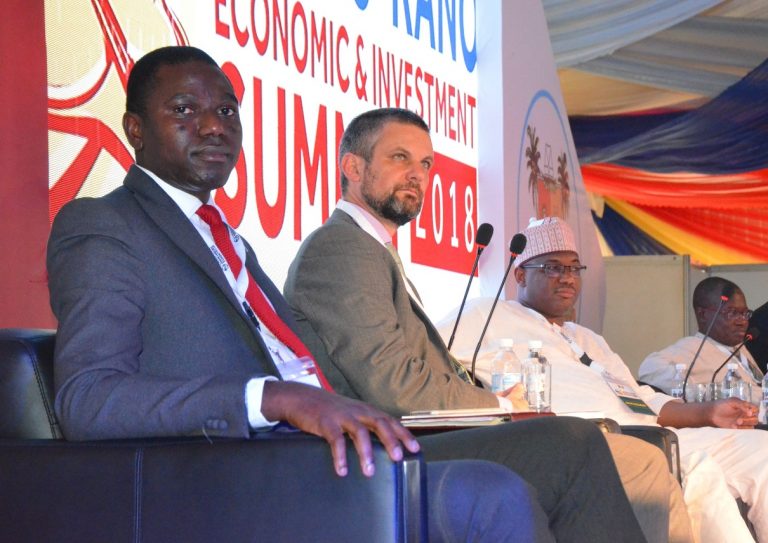 The management of Heritage Bank Plc, last week took its campaign for improved funding of Nigeria’s agribusiness and commerce to the Lagos-Kano Economic and Investment Summit held at the Jubilee Chalets, Epe, Lagos last week, where it called for establishment of a Commodity Exchange.
High point of the summit was the signing of a Memorandum of Understanding (MoU) by both states to ensure the collaboration boost commerce and agribusiness and consequently raise their revenue generation capacity.
Speaking at the plenary session on “Growth & Investment Opportunities in Agribusiness- Value Chain Approach,” Olugbenga Awe, Group Head, Agric Financing, Heritage Bank, noted the urgent need for a Commodity Exchange as a necessary for the success of the MoU.
Awe said the exchange would make future contracts between traders and speculators in both states and others more possible, thereby enhancing agribusiness in the country generally.
Specifically, he said the Commodity Exchange would help put the activities of grain farmers and others in Dawanau market, Kano; and others on the spotlight.
According to him, the volume of agribusiness and commerce going on daily in Dawanau market, the hub of grains and seeds trading across the world, needs to be complemented by appropriate policies.
Based on this, Awe advised the two states to ensure that the MoU captures the establishment of a Commodity Exchange to make every produce traded on the floor of the exchange traceable, unlike now when grains sourced in Kano or Lagos could be sold and consumed in other part of the country without knowing its source.
A statement by Fela Ibidapo, Group Head, Corporate Communications at Heritage Bank recalls that at the moment, commodities sourced at Dawanau are, daily, transported to Togo, Burkina Faso, Cameroon, Chad, Niger, Ghana Central African Republic, South Africa, Libya and other African countries. Again, traders from Burma, Dubai, India, China, Britain, America, Saudi and other countries patronize the grains/seeds market for items like Moringa seed and leaf, Sesame seed, Hibiscus flower (Sobo) and other items such as Soya beans, Beans, Cassava, Millet, and Guinea corn without any credit given to their farmers and Nigeria.
Awe added that the commodity exchange would help address such issues, besides encouraging farmers to put in more efforts into growing more grains.
Similarly, Dr. Sani Hussaini Sagagi, Deputy Country Director, Sasakwa Africa Association, Nigeria; said any country that wants to progress must take cognizance of its population structure when formulating policies.
According to him, the Africa’s population would increase to 1.4 billion in the next 12 years, while it would be 2.5 billion in 2030. Sagagi warned that over 50% of that would be majorly young men and women who would choose to live in urban areas with the motive of getting white collar jobs.
This, he continued, means there would be food shortage and climate change, which would cause 50% yield reduction in agribusiness, which is why he urged Lagos and Kano to immediately start putting mechanisms in place to address the social menace that would arise because of the expected population explosion.
He expressed optimism that the agreement signed by Lagos and Kano States would help a lot in finding solace to the possible challenges that would arise in the future.
Also present at the occasion was Richard Sandall, Senior Private Sector Development Adviser, the UK’s Department for International Development (DFID), who identified financing, security and land as some of the challenges militating against smooth agribusiness in Africa.
He however said the DFID was established with the aim of supporting Africa to address issues like that, adding that “apart from working on alleviating the constraints, DFID also focuses on assisting in formulating appropriate policies that would nip those challenges in the bud”.