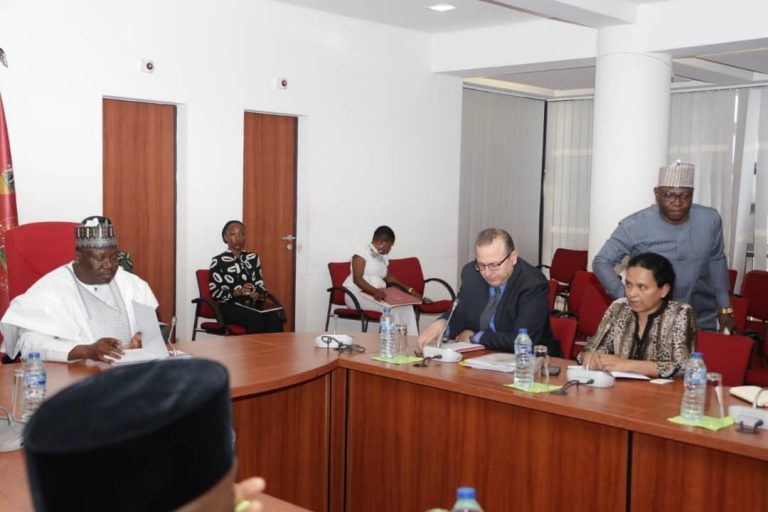 President of the Senate, Ahmad Ibrahim Lawan, on Wednesday, said the National Assembly is already consulting with the executive arm of government on the introduction of a new version of the Petroleum Industry Bill. Lawan spoke while hosting representatives of the International Monetary Fund (IMF), led by Amine Mati, Senior Resident Representative Mission Chief for Nigeria, who paid a visit to his office at the National Assembly, Abuja.
According to Lawan, the legislators, determined to ensure the eventual passage of the Bill which defied passage into law since 2007, have devised a strategy that involves constant interaction and collaboration with the executive.
Such interface, he believes, will birth a new PIB to be drafted from scratch, passed by the National Assembly and assented to by the President before the end of this year.
Going forward, according to a statement by Ezrel Tabiowo, Special Assistant (Press), to President of the Senate, Lawan assured that “the Petroleum Industry bill as referred to, has defied passage over the years since 2007.
“In 2011, there was another effort by the government, that bill was not passed as well. In 2015, there was a legislative effort and the PIGB was passed eventually, but at the end of the day was not signed.
“So, we came up with a new idea in the ninth National Assembly, that the fact that the Executive tried by drafting a bill and bringing it here for two tenures, then the legislature tried to do it on its own, none saw the light of the day.
“This time around, we should actually interact and collaborate more even before the bill is born.
“Let the Petroleum Industry bill be one of the Executive and Legislature, and that means starting to work on the bill from scratch between both arms of government.
“We are in consultation already, and by the time that we are able to fashion out the bill, our committees will swing into action.
“We believe that this time around, the ninth National Assembly will break the jinx and should be able to pass the Petroleum Industry Bill,” Lawan stressed.
He added that the economy will get a boost when the National Assembly passes the Petroleum Industry Bill before the end of the year and is signed into law.
On the relationship between the IMF and Nigeria, the Senate President said the fund “has been a friend of Nigeria for a long time.
“Nigeria needs IMF, we are not contesting this. We have our own challenges and have to borrow resources to implement, particularly the capital part of our budget.
“So, we always prioritize our budget to reflect our infrastructural needs. We want you to always be there to support us, we believe that you can give us advice that will help our economy.”
Lawan also appealed to the fund to support committees of the National Assembly in the area of capacity building for legislators, noting that such would assist in the discharge of oversight functions and guarantee prudence and efficiency on the part of Ministries, Departments, and Agencies of government.
“The fact that the National Assembly is critical to the development of this country means that you should help us build our capacities.
“Members of the Finance Committee should be able to have more capacities to discharge their responsibilities, and also when they engage Ministry of Finance or the Financial Institutions, they should be able to have very solid platform to exercise oversight critically to ensuring there are prudence and efficiency,” the Senate President added.
Others on the IMF delegation were Jesmine Raman, Zainab Mangga, Nanrup Ibrahim, Osana Odonye, and Harrison Okafor.

Photo caption: President of the Senate, Ahmad Ibrahim Lawan, during a meeting with the IMF Mission Chief, Amine Mari, at the National Assembly on Wednesday, February 5, 2020.