Mixed Sentiments Ahead On NGSE, As Investors Review Devts Around Covid 19 Pandemic 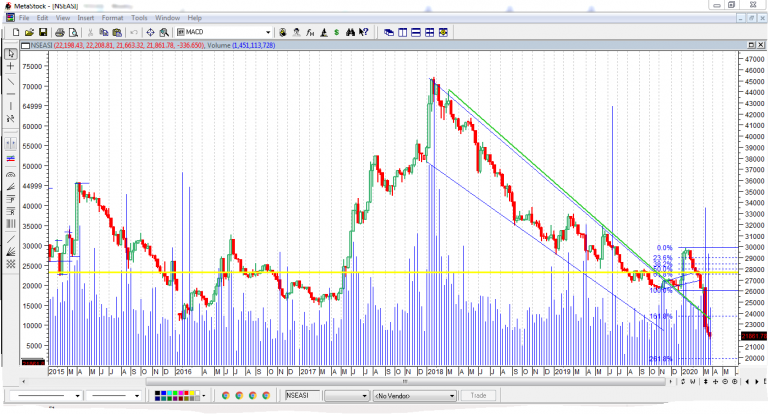 Market Update for the Week Ended March 27 and Outlook for March 30-Apr 3
The mixed trading pattern and performance continued for the second week on the Nigerian Stock Exchange (NSE) with the benchmark All-Share index extending to the third successive week of decline on low transaction volume. This is happening amidst mixed sentiments as the number of Covid-19 cases in Nigeria rose to 81 by Saturday morning, while the global figure is around 23,000 deaths from 540,000 cases, making it a real threat to the already quaking global and domestic economies.
Already, many central banks and governments are rolling out economic stimulus packages and measures to curtail the outbreak and mitigate the impacts of the virus on corporate organizations, businesses, and households.
The mixed macroeconomic indices emanating from National Bureau of Statistics and Central Bank of Nigeria are clear indications of an already challenging economy, with inflation rate already hitting a 22-month high of 12.2%, while the Purchasing Manager Index (PMI)for the month of March was at its lowest level of 31.1 points, from 58.3 points in the previous month. For fear that the virus may trigger a major economic crisis, the CBN’s Monetary Policy Committee (MPC), at its meeting on Monday and Tuesday, took note of the continued rise in domestic prices; the glut in oil supplies and low oil prices, in the wake of the global pandemic. Members also reviewed the exchange rate pressure and other domestic monetary and fiscal responses as they affect the evolving crisis. In view of these, the committee members unanimously voted to retain the Monetary Policy Rate (MPR) at 13.5%, while holding all other policy parameters constant.
Investdata notes that the recent technical devaluation of the Naira, the lingering border closure and the impact of the global pandemic has reduced cross-border trading resulting in inflationary pressure on everything. This might lead to hyperinflation, meaning the temptation to hold cash, for anybody, is the worst for now.
The early evidence includes the low money market rates and declining yield in the fixed income market, just as the fear of the government’s ability to redeem its bonds at maturity, especially given the shaky revenue profile already noticed. The first place you look to preserve buying power is in stocks as a way of hedging against inflation.
The Minister for Finance, on Friday, re-echoed our position as she warned that Nigeria might go into another recession, should the Covid-19 pandemic continue beyond the next six months as government revenue is already struggling, especially as oil is selling below its new benchmark of $30 per barrel already.
We recall that in 2016 when the nation’s economy slipped into recession after 28 years, crude oil was selling for as low as between $23 and $26 per barrel. This low revenue and high debt profile is a threat to the fixed income market, especially FGN bonds.
Given the current market dynamics, Investdata believes that it will make more sense looking the way of valued stocks, all of which are now selling at discount to the book value. Should the virus hit the economy harder, throwing it into yet another recession, the government will begin to default on its debts, which is a more likely today, given the huge cost of debt servicing at about 50% of its earnings as of last year, unless some debt relief or moratorium by its creditors. It is clear that investors are more worried about the immediate economic impact than they are about fiscal mismanagement by Nigeria’s political leaders.

Movement Of NSEASI
The composite NSEASI, during the week under review, had a mixed trend of three trading sessions of marginally up, and two days of down market, closing the period lower, despite the seeming positive sentiments and breadth, as bargain hunting slowed down selloffs in different sectors.
Trading for the week started on a negative note, with the index losing all of 2.24%, followed b Tuesday’s mild recovery as the index gained 0.19%, which was halted at the midweek when the market fell marginally by 0.05%. This was not sustained on Thursday, as the NSE wiped off the previous day’s loss with its 0.13% gain on increase buying interests in financial service stocks which were sustained on Friday when the index chalked 0.48%, reducing the week’s loss to 1.52%, as against the previous week’s 2.35% decline.
Consequently, the All-Share Index lost 336.65basis points, after opening at 22,198.48bps, touching an intra-week low of 21,663.32bps from its high of 22,208.81bps on mixed sentiments, low traded volume on indecision among traders. The index closed the week at 21,861.78ps, after breaking down the 22,000 psychological line on a lower traded volume, when compared to the previous week. Market capitalization dropped by N174.82bn, closing at N11.39tr, from the opening value of N11.57tr, representing a 1.51 % value loss in a week when additional shares of Golden Guinea Breweries were listed. This was just as eTranzact announced a rights issue for N7bn from existing shareholders.
Last week also, trading was fully from remote platforms, as part of measures to curtail the spread of the deadly Coronavirus by the NSE management, just as few companies released their 2019 audited results with dividend announcements. The exchange equally announced an extension of the submission deadline for the 2019 audited financials by two months.
It was a mixed trading and bargain hunting as kobo stocks dominated the week’s advancers table, amidst the seeming improvements in buying interests in value stocks selling below their intrinsic worth during the period. This reflected in the market breadth as advancers outnumbered decliners in the ratio of 34:30, even as the impetus behind the week’s performance was weak, with Money Flow Index slipping to 32.34bps, compared to the 37.57bps of the previous week.
Transaction volume was low, indicating the wait-and-see attitude of market players, while discerning investors took advantage of the low prices in the midst of panic selling and confusion to reposition their portfolios, as earnings reporting season has been extended to May. The mixed sentiment during the period was confirmed by Investdata’s Sentiment Report for the week showing 36% ‘buy’ volume, and 64% ‘sell’ position, on a transaction volume index of 0.96.

Mixed Sectoral Indices
The sectoral indexes for the week were largely bearish, except for the NSE Insurance and Banking indexes which closed higher by 3.25% and 2.06% respectively, while the NSE Consumer Goods led the decliners after shedding 8.05%, followed by the NSE Oil/Gas and Industrial Goods that dropped by 2.21% and 0.52% respectively.
Market activities in terms of volume and value for the week, were down by 48.21% and 54.18% respectively, as investors traded 1.45bn shares worth N14.92bn, as against the previous week’s 2.8bn units valued at N32.56bn. Volume for the week was driven by trades in financial services stocks, especially Zenith Bank, Guaranty Trust Bank, and FBNH.
Wapic Insurance and Cutix were the best-performing stocks for the week, as they topped the advancers chart, after gaining 23.81% and 20.69% respectively, closing at N0.26 and N1.40 per share on market forces and sentiments. On the flip side, Nigerian Breweries and Africa Prudential lost 15% and 11.17% respectively, closing at N25.50 and N3.42 per share on panic selloffs.

Market Outlook
We expect the mixed performance to continue depending on developments around the Covid 19 pandemic in the new week and implementation of the government’s economic stimulus packages to mitigate the effects of the virus. Already, we note that the manufacturing sector, among others in the economy, is already depressed by happening in the economy.
Also, don’t forget to play defensive stocks among the many fundamentally sound companies that remained depressed, making them attractive for bargain hunting by market players. This has also resulted in significant improvements in Dividend Yields of stocks, even as we note the fact that fund managers who held cash before now, may have to rethink the strategy and go for value stocks with high upside potentials.
This is just as more liquidity flow to high Dividend Yield stocks with sound fundamentals, a situation that will also be based on the seemingly positive outlook for the domestic economy, despite the mixed outlook for 2020 from various analysts.
While discerning investors should take advantage of the current low stocks valuation to position for the medium to long-term, it is noteworthy that the Nigerian equity market is selling at a discount and therefore offers high upside potential.
We should, however, not overlook the possibility of a bargain-hunting motive supporting positive performance, especially with many fundamentally sound stocks remaining underpriced. With a dividend yield of major blue-chips continuing to look attractive in recent weeks, we expect speculative trading to shape the market’s direction, despite the seeming mixed outlook.
Again, the current undervalued state of the market offers investors opportunities to position for the short to long-term, which is why investors should target fundamentally sound and dividend-paying stocks for possible capital appreciation in the New Year. This was noted in the 10 golden stocks and trading ideas for 2020, as discussed extensively during the Investdata 2020 Opportunities & Trade Ideas Summit.
Meanwhile, the home study packs of Invest 2020 Opportunities and Trade Ideas Summit containing the 10 Golden Stocks for 2020 are available with an average return of 13.37% in less than 30 days. To obtain your pack send ‘Yes’ or ‘Stock’ to 08028164085, 08032055467, 08111811223 now.