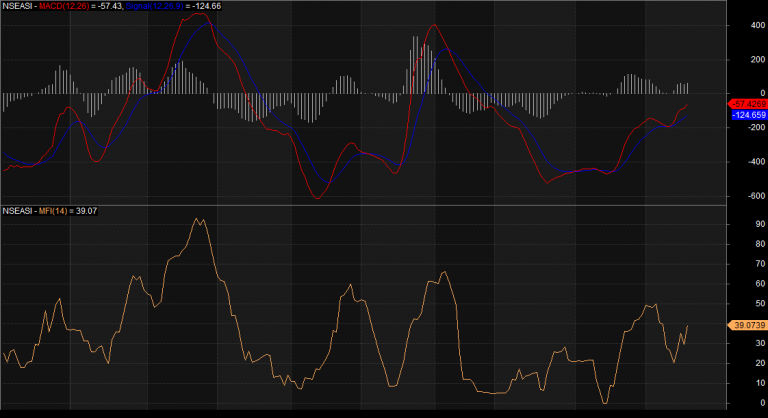 Market Update for September 18
Midweek’s transactions on the Nigerian Stock Exchange (NSE), again closed positive ahead of Thursday’s opening of the rescheduled meeting of the Central Bank of Nigeria (CBN) Monetary Policy Committee (MPC), with an increased demand for stocks as shown by the improved traded volume. The day’s market sentiments turned green, cutting short two sessions of back-to-back losses on improved buying interest in banking stocks, among others after discerning traders and investors took advantage of the prolonged pullback and recent profit-taking. They, expectedly, advantage of the current low prices in hope that the economy will soon find a direction, especially with the recently constituted Economic Advisory Council by President Muhammadu Buhari (READ MORE), a move, even the most cynical of the administration’s critics agree is the way to go.
Nonetheless, the Nigerian economy has continued on a slow growth trajectory in the last four years (exactly 13 quarters so far), with the recently published Q2 2019 GDP by the National Bureau of Statistics (NBS) at 1.94%, which many agree is grossly below its potential. The average GDP growth in the 13 consecutive quarters has stood below 1% at 0.71%, indicating that the economy remains weak, continues to struggle and is in dire need of a stimulus. The August Inflation figure stood at 11.02% from July position of 11.08%, is the lowest since January 2016, as it moves towards the CBN’s single-digit target. Purchasing Managers’ Index (PMI), an economic index that measures activities in the manufacturing sector and signals a rise or fall in the nation’s production activities, in the month of August expanded by 30 points to 57.9% from the previous month 57.6%.
In the last nine months, there have been over 100 actions taken by global central banks to lower interest rates and stimulate the world’s economy. On Wednesday, the Feds cut rates for the second time in 49 days, a week ago, the European Central Bank restarted Quantitative Easing (QE), after ending it last December, as the world prepares for a worst-case scenario in the ongoing trade war or show of strength between the two largest economy- the United States and China. That has set up a lopsided risk-reward system for financial markets (i.e. asymmetrical outcomes), with central banks pointed in the direction of defense, while standing ready to act (as a preventer of bad outcomes, as they were throughout the post-financial crisis environment). Without doubt, the reward for investors in the event of U.S./China reaching a trade agreement far outweighs the downside of an indefinite trade war.
Consequently, we should expect the announcement of a marginal rate cut by the MPC when its meeting ends Friday, considering their position in the July meeting, a situation that would signal that President Buhari and his team may stimulate productivity, a situation that would drive national income and consumption.
Meanwhile, trading at the midweek opened on the upside and was sustained, despite oscillating till late afternoon on buying interest in Ecobank Transnational Incorporated (ETI), Guaranty Trust Bank, Stanbic IBTC, FCMB, Access Bank and Zenith Bank. These pushed the benchmark NSE All-Share index to intraday high of 27,700.07 basis points, from a low of 27,386.36bps, before closing the session higher at 27,581.61bps on positive breadth.
Market technicals on Wednesday were positive and strong, with traded volume higher than previous day’s in the midst of a positive market breadth and strong buying pressure, as revealed by Investdata’s Daily Sentiment Report, showing ‘buy’ volume of 94%, while ‘sell’ position stood at 6% on total daily transaction volume index of 1.68. The energy behind the day’s performance was, nonetheless, weak despite Money Flow Index at 39,07 points, from the previous session’s 29.65bps which indicated that funds entered some stocks and the market as reflected in the volume.

Index and Market Cap
The NSEASI at the end of Wednesday’s trading gained 274.07bps, closing at 27,681.61bps after opening at 27,407.04bps which represented a 1.00% gain, just as market capitalization was up N133.66bn, closing at N13.48tr from an opening a value of N13.41tr which also represented 1.00% value gain.
Attention: If you have not signed up for Investdata buy and sell signal setup, don’t delay. We have just added another risk management feature and new stocks of most revered traders and investors in corporate Nigeria to our watchlist. These stocks are with double potentials. To become a member, send ‘YES’ or ‘STOCKS’ to the phone numbers below. Take advantage of this service to buy right and sell right ahead of Q3 earnings reports portfolio reshuffling and repositioning ahead of fiscal and monetary policy catalysts.
The day’s upturn was due to demand for MTNN, Guaranty Trust Bank, Zenith Bank, ETI, Stanbic IBTC, Access Bank, UACN, Wapco, NB, and Flour Mills, among others, which impacted positively on the NSE’s Year-to-Date loss, reducing it to 11.93%, even as YTD market capitalization gain climbed to N1.65tr, representing 14.83%, from the year’s opening level of N11.72tr.

Bullish Sector Indices
The sectoral performance indexes were largely bullish, except for the NSE Oil/Gas at 0.19%. The NSE Banking index led the advancers after gaining 2.99%, followed by Industrial Goods and Insurance indices with 0.94% and 0.45% respectively, while Consumer Goods followed with 0.27%.
Market breadth remained positive as advancers outnumbered decliners in the ratio of 25:13; while market activity in volume and value were up by 91.64% and 84.45%, respectively at 379.51m shares worth N5.35bn, from the previous day’s 198.02m units valued at N2.9bn.
ETI and Cutix were the best-performing stocks, after gaining 10% each to close at N8.80 and N1.54 per share, on low price attraction and the interplay of market forces. On the flip side, Champion Brewery and RT Brisco lost 8.80% and 6.80% respectively, closing at N1.14 and N0.27 on selloffs, as investors weighed their options in both stocks based on their most recently announced financials.

Market Outlook
We expect a mixed performance as profit-taking from this short rally continues ahead of Thursday and Friday’s MPC meeting, while bargain hunters take advantage of low prices of equity to position, now that index had reversed down. Discerning investors should latch on it to average down and recoup their investment immediately a recovery stage is set through economic policies and things start to change gradually to influence equity prices positively, while investors watch these sectors that have become defensive recently like insurance, banking, industrial goods, services, and oil/gas that will go bullish in no distance time. Also, with all eye fixed on the newly appointed economic advisory council to settle down and kickoff.