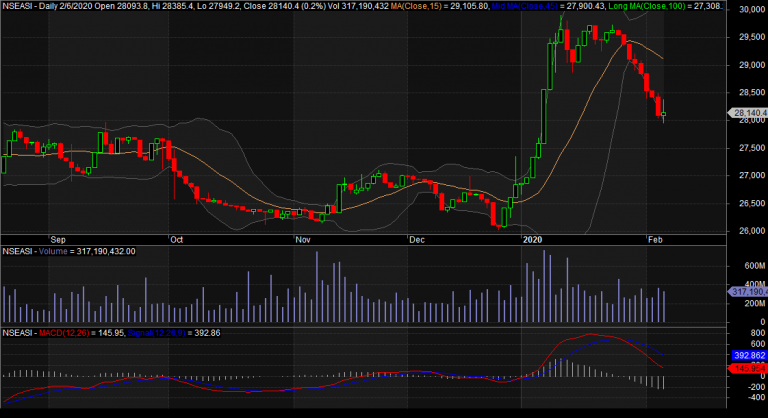 Market Update for February 6
Trading on the Nigerian Stock Exchange on Thursday was very volatile and mixed but halted eight straight days of decline as the benchmark NSE All-Share index closed marginally up on an above-average traded volume and improved buying interests in financial service stocks.
Recall that on Tuesday we talked about two factors to watch that would likely dictate market sentiment and direction in the coming days- the audited earnings reports accompanied with dividend declaration and the rates of return in other investment outlets. It is clear that expectations of improved earnings and payout have triggered a demand for banking stocks again after they had suffered losses in recent times, as the market prepares to welcome their full-year numbers any moment from next week. More companies have, nonetheless, continued to publish their unaudited reports and closed period as signs of plans for the early filing of their audited accounts.
Technically, candlestick formation at the end of Thursday’s trading signaled the possibility of a reversal, which is a function of market forces and needs to be confirmed and followed through in the coming days. It is important to also understand that the market may be triggered by impressive financials and payout as all eyes are now on the audited results.
Indeed, the Presidential Economic Advisory Council team met with President Muhammadu Buhari on Thursday and members reechoed the position of Investdata and other financial market analysts on the lack of coordination between the country’s monetary and fiscal policy, leading to a misalignment. This, they told the president, has been extended to Federal Ministries, Department, and Agencies, as shown in the absence of teamwork which has resulted in sluggish economic growth and recovery (READ MORE). The mismatch in government policies, has been further worsened by the unconducive business environment, which has made them relatively low-interest rate inconsequentially and unable to propel the anticipated boost in productivity, and job creation, twin factors that should oil the macro-economy, thereby enhancing the living standard of Nigerians
Thursday’s trading opened on the upside and was sustained till early afternoon, before pulling back and oscillating in the last few minutes of the session on intraday profit booking which cut some of the early gains especially by banking stocks. This pushed the NSEASI to intraday high of 28,385.36 basis points, from its low of 27.949.15bps. It thereafter finished the session slightly higher than it opened at 28,140.41bps.
Market technicals were positive and mixed, with lower volume traded than the previous session’s in the midst of market breadth that favoured the bulls and mixed sentiment as revealed by Investdata’s Sentiment Report showing 56% ‘sell’ volume and 44% ‘buy’ position. The day’s total transaction volume index stood at 0.88, while the impetus behind the day’s performance was seriously weak, with Money Flow Index falling to 16.65 points from the previous day 24,84point, indicating that funds exited the market and some stocks.

Index and Market Caps
At the end of Thursday’s trading, the benchmark index gained a marginal 46.65bps, closing at 28,140.41bps from its 28.032.23bps opening, representing 0.17% rise, just as market capitalization gained N26.41bn, closing at N14.5tr, from an opening value of N14.47tr, representing a 0.18%. This followed Thursday’s listing of additional 2.26bn ordinary shares of 50 kobo each at N1.05 per unit in favour of Abbey Mortgage Bank (READ MORE).
Attention: If you have not signed up for Investdata buy and sell signal setup, don’t delay. We have just added another risk management feature and new stocks of most revered traders and investors in corporate Nigeria to our watchlist. These stocks are with double potentials.
To become a member, send ‘YES’ or ‘STOCKS’ to the phone numbers below. Take advantage of this service to buy right and sell right at the current market recovery ahead of full-year earnings reporting season portfolio reshuffling and repositioning as we await an economic reform policy to stimulate and re-track the economy again.
The upturn was impacted by ‘buy’ interest in Guaranty Trust Bank, FBNH, Zenith Bank, UBA, Access Bank, ETI, Oando, UACN, Vitafoam, and Honeywell, among others, which impacted negatively on the NSE’s Year-To-Date gain, reducing it to 4.84%. Market capitalization, YTD gain, dropped to N1.52tr, representing 11.88% growth over the year’s opening value.
Mixed Sector Indices
The sectoral performance indexes were largely bullish, except for the NSE Industrial and Consumer goods Indexes that closed 1.87% and 0.12% lower respectively, while the NSE Banking led the advancers after gaining 3.32%, followed by Insurance and Oil/Gas with 0.11% and 0.07% respectively.
Market breadth turned positive as advancers outnumbered decliners in the ratio of 20:15, while market activities in volume and value traded fell by 9.43% and 19.86% respectively to 317.19m shares worth N3.43bn, from the previous day’s 350.21m units valued at N4.28bn. Volume was driven by transactions in FBNH, FCMB, Zenith Bank, UBA and Nigerian Breweries.
Law Union Insurance and Wema Bank were the best-performing stocks of the session, gaining 9.78% and 7.58% to close at N1.01 and N0.71 per share, on the ongoing recapitalization exercise in the industry, and earnings expectation. On the flip side, SKYAVN and C & I Leasing lost 9.88% and 9.775 respectively, closing at N3.74 and N6.00 on selloffs and profit-taking.

Market Outlook
We expect the seeming reversal to be sustained, despite the likely continuation of the mixed intraday movement in the midst of profit-taking, with investors buying in the dip ahead of dividend news and declaration. This is also against the backdrop of the fact that capital wave in the financial market may persist in the midst of the unstable economic outlook for 2020.
Also, investors and traders are positioning in anticipation of the 2019 full-year earnings reports, amidst the changing sentiments in the hope of improved liquidity and positive economic indices which may reverse the current trend.
We see investors focusing on the upcoming of the full-year earnings season, targeting companies with strong potential to grow their dividend on the strength of their earnings capacity.
Again, the current undervalued state of the market offers investors opportunities to position for the short, medium and long-term, which is why investors should target fundamentally sound, and dividend-paying stocks for possible capital appreciation in the New Year.
This was noted in the 10 golden stocks and trading ideas for 2020, as discussed extensively during the Investdata 2020 Traders & Investors Summit held in Lagos last December.
Also, traders and investors need to change their strategies, because of the NSE’s pricing methodology, the CBN directives and their impact on the economy in the nearest future.
Meanwhile, the Investdata team welcomes you to a bullish 2020. The home study packs of our Invest 2020 Opportunities and Trade Ideas Summit, containing the 10 Golden Stocks for 2020 are available. To obtain your pack, send ‘Yes’ or ‘Stock’ to 08028164085, 08032055467, 08111811223 now.
Ambrose Omordion
CRO|Investdata Consulting Ltd
info@investdataonline.com
info@investdata.com.ng
ambrose.o@investdataonline.com
ambroseconsultants@yahoo.com
Tel: 08028164085, 08032055467