A healthy combination of the continued impact of the third quarter earnings surprises and positive macro-economic indices which confirmed the nation’s improved recovery continued to impact basic indices of the Nigerian Stock Exchange (NSE) as they confirmed that the economy remains on the path of growth, despite being slower than expected. It was however strong enough to influence equity prices positively such that the market closed the month of November higher, building on the gains recorded in the preceding month and reflecting the high demand for stocks. Growth in the period under review was helped by the rising foreign investment inflows in spite of the nation’s downgrade by Moody’s and decision of the MSCI Frontier Market Index within the period under consideration.
The manufacturing activities in the current year continues to improve as a result of gradual increase in the purchasing power of Nigerians and increasing productivity that is reflected in the monthly Purchasing Managers’ Index for the last eight months, according to data from the Central Bank of Nigeria (CBN), from 55.0 in October to 55.9 last month.
More specifically, the first three quarterly results of companies listed on the exchange generally reveal improvements in earnings and profit among players in consumer and industrial goods sectors, most of which beat expectations to reflect the impact of the CBN’s intervention in the foreign exchange segments of the inter-bank market. This is because most of these companies rely on forex in one way or the other to source raw materials, particularly when there are no locally available alternatives. Another important factor is the declining rise in headline inflation over the past nine months. Expectedly, these improving numbers have also impacted the price movement of these companies.
During the month’s 22 trading sessions, the market was up in 15 and down in seven, continuing a two-month uptrend that impacted year-to-date gain positively, lifting it to 41.19%, which is attributable to factors mentioned above. These have ensured that the Nigerian stock market remains one of the best performing in Africa and globally as many stocks on the exchange remain relatively undervalue, despite its high margin of safety.
Meanwhile, the composite NSE All-Share Index in the month gained a total of 1,264.31 basis points, closing at 37,944.60 after touching a high of 38,057.71 and low of 36,427.31 within the period, compared to the 36,680.29 at which it opened. The closing point represented a 3.45% growth during the month on a strong buy-market position that impacted on stock prices to sustain the uptrend to the recent year resistance level that any breakout will confirm new rally.
Buying pressure of the total transactions for the period was 93%, and selling position, 7% to sustain the bull-run in the last quarter of the year, while volume index for the period stood 1.60. Market capitalisation gained N519.64 billion to close higher at N13.22 trillion, from N12.69 trillion, representing a 4.18% value gained. The uptrend continue on impressive numbers as foreign investors increased their position in the market in reaction to more positive macro-economic data that being released.
Transactions in volume and value for the month were up by 74.87% and 84.75 to 10.02bn shares worth N117.86bn, as against the 5.73bn units valued at N63.8bn recorded in the preceding month.
Market breadth for the month was positive with the advancers outnumbering decliners in the ratio of 42:31 to continue the bull transition, irrespective of mixed sentiments and profit taking during the period.
Sectoral indexes performance chart followed the path of the composite index, except for the NSE Consumer Goods and NSE ASeM that closed on the down side. The bar chart below shows that the NSE Premium and Lotus indices drove the market the most in the month under review, with the former gaining 7.73%, as a result of price appreciation of Dangote Cement and FBNH, while the later followed with 6%. They thereby outperformed the composite NSE All-Share Index during the period, ahead of the NSE Industrial index which climbed 4.66% up to reflect the improving performance of the companies in that sector, while the NSE Pension and NSE 30 indices grew 2.96% and 2.36% respectively, revealing investors’ interest in blue-chip and dividend-paying stocks, amidst the oscillating sentiments and attractive low Price-To-Earnings ratio attraction.
Other sectors that closed up during the month were: The NSE Banking, NSE Insurance, NSE Main Board and NSE Oil/Gas.
Sectoral indexes that closed in the red are NSE Consumer Goods and NSE ASeM, shedding 0.82% and 0.05% respectively, creating opportunities for investors and traders to position, due to their improved earnings that will continue due to impact of the positive macro-economic data on the sectors and economy. 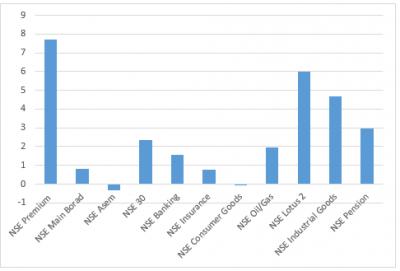 Best performing stocks for the period under view was Fidelity Bank, which rallied on the strength of its successful Eurobond outing and improved numbers, with positive sentiment as a leader among the nation’s second tier banks. It gained 35.53% of its opening price; followed by another service provider – Nahco Aviance, which appreciated by 32.31%; ahead of Diamond Bank’ 24.75% notch, while consumer goods followed in this step- Cadbury climbed 23.24%, International Brewery and Dangote Sugar were up by 22.27% and 20.33% respectively. Low and medium caps top the best performing stock table for the month which included: Medview Air with 19.17%; FBNH 15.16%, Forte Oil 14.98%, Eterna, 14.59% and Caverton, 13.49%; among others. 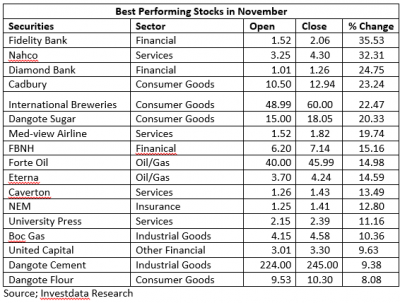 The worst performing stock for the period was Linkage Assurance, which shed 27.91% of its opening price, amidst profit taking and activities of market forces; followed by C&I Leasing, which lost 24.72% also as a result of profit booking and its proposed primary activities/share reconstructing. The share price of Newrest ASL fell by 20.45%; Nigerian Breweries closed 11.80% lower for the month on serious profit taking, making it attractive at its current price; just as Champion Brewery dropped 10.98% on the back of market forces. 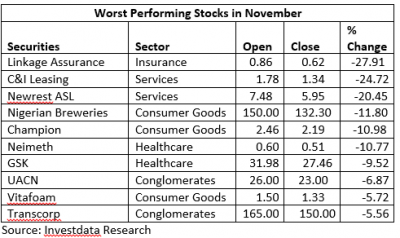 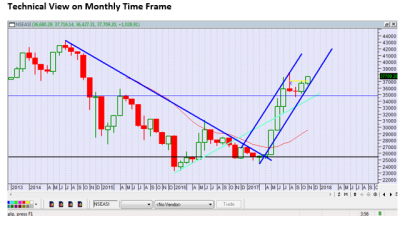 Index action for the month remained in the rising channel and above the 20/50-Day moving average on improved trade volume, while reflecting the increasing demand for stock as market and economic fundamentals continue on the path of growth to keep strong momentum despite the mixed sentiments and strong volatility. With the improved economic data and current trading pattern, ahead of Santa Claus and year-end rally in preparation for full year earnings reporting season in Q1 2018, market technicals remain positive. This is likely to remain so in the new month as seasonal changes and impact of oil price remain at play in the market.