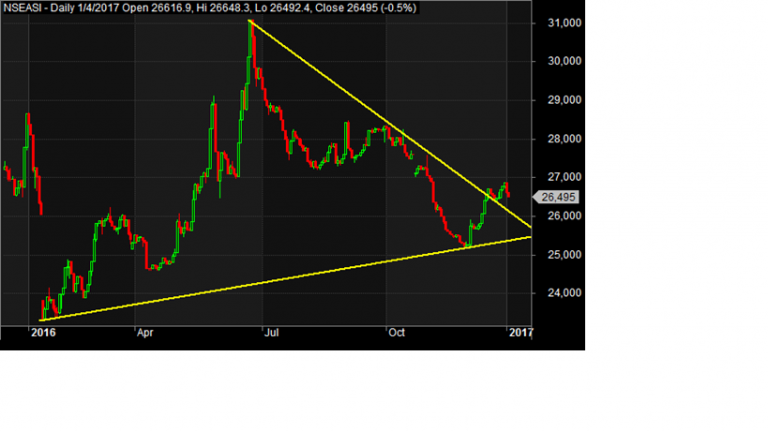 Trading volatility on the Nigerian Stock Exchange (NSE) closed lower on Wednesday, the second trading day of the year 2017 as highly capitalized stocks lost value to put the bears in charge, as many funds managers and investors reshuffled their portfolios in preparation for the upcoming earnings season when majority of the listed companies will release their 2016 full year financials.
The decline was also due to mixed expectations of the earnings season, judging by the third quarter numbers released before now that have raised red flags about many companies and the fact of their being unable to reward their shareholders with dividend, except of course a miracle happened between October and last month.
Consequently, divesting equities that are not likely to pay dividend and buying the dividend paying stocks with the proceeds became the norm. Add this to investors selling down their holdings to meet exigencies of this season, particularly payment of school fees and house rents, among other needs, which may keep the market unstable at this time of the year.
This short selling or profit taking opportunities exists to create buying prospects for traders and discerning investor.
Also, our tracking of the NSE All-Share index reveals that in the three consecutive negative market performance of years past, first trading weeks were in the red while only that of 2014 closed green.
At the close of Wednesday’s activities, the benchmark NSEASI shed 121.85 points to close lower at 26,495.04points, from an opening figure of 26,616.89 points, representing a 0.46% decline on a relatively high volume of trades to remain on a bear run. Similarly, market capitalisation for the day lost N40 billion to close lower at N9.12 trillion from an opening value of N9.16 trillion, representing a 0.46% decline
The continued drop in equity prices have pushed the negative position of NSEASI’s year-to-date loss to 1.41%, just as capitalisation adjusted lower by N120 billion.
Market breadth for the day was negative as the number of decliners outnumbered advancers in the ratio of 17:14 on a mixed sentiment of buy position of 2% and sell volume of 98% of the day’s total volume of transactions.

Volume of trades was down by 82% to 602,047,325 million shares worth N1.20 billion as against the previous session’s 3.37 billion units. Transaction value however dropped to N1.20 billion, representing a 68.10% decrease from the previous trading day’s level of N3.78 billion.
Transactions in the shares of UNITY KAP, OMOSAVBNK, UBA, UCAP and GTBANK topped the activity chart as most traded equities by volume
At the end of the day trading, Vitafoam led the gainers table with +4.96% gain to close at N2.54, in what may seem investors positive disposition to its audited result for the year ended September 30, 2016, on Tuesday, showing that the management successfully reduced its loss after tax to N32.032 million from N71.981 million in the corresponding period of 2015, representing a 55.49 per cent improvement. The directors offered a 12 kobo dividend, notwithstanding.
The losers table was led by Ashakacem, which is billed for delisting on January 17, came tops with a -4.91% slide to close at N11.43.
As shown in the graph above, the NSEASI on a daily time frame continues a downward trend as it recently formed a double top that supports the pullback on a declining volume of trade. The index rebounded within the symmetrical triangle and broke out before the current two days pullback. The moving trend is strong after the first support level at 26,616.89.
If market forces go positive in the next trading session. Investors should watch and wait for retracement before jumping into the market for dividend position.