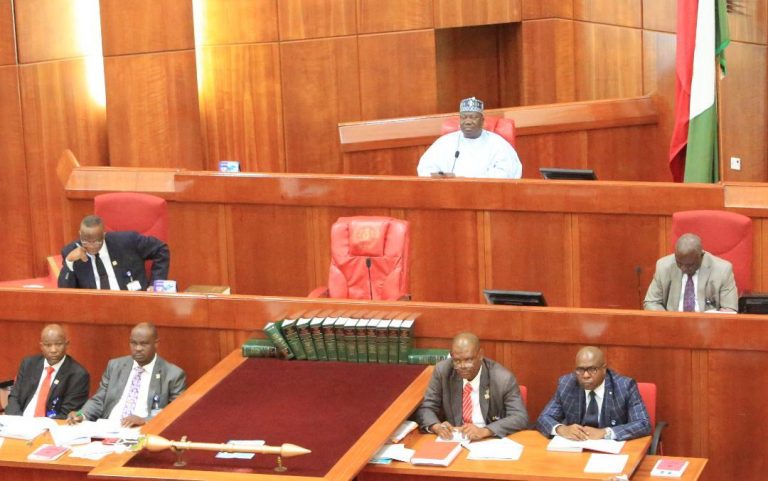 •Raises Oil Benchmark To $57pb, 2.18m Barrels
•Sets N1.5tr Target For Customs
The Nigerian Senate, on Thursday in Abuja, passed the Federal Government’s 2020-2022 Medium Term Expenditure Framework and Fiscal Strategy Paper (MTEF/FSP), the basis for which the annual budget proposals are hinged. It was forwarded to the National Assembly last week by President Buhari.
In passing the document, a statement by Ezrel Tabiowo, Special Assistant (Press) to President of the Senate noted, the Senators made 16 recommendations, chief among which was the proposal of N10.729tr as total estimated Federal government expenditure. The recommended budget size, following its consideration of the report of the Joint Committees on Finance and National Planning, represents a 7.27% increase over the N10.002tr contained in the original MTEF/FSP presented by the President.
This was just as Senate President Ahmed Lawan announced receipt of a request by President Muhammadu Buhari to present the Federal Government’s 2020 Appropriation Bill at a joint session of both chambers of the National Assembly on Tuesday, October 8, 2019.
To fund the increase, the Senate recommended a daily crude oil production benchmark of 2.18m barrels per day for 2020, based on $57 per barrel as a benchmark for the fiscal year.
The N172bn saving on income accruing from the benchmark increase, which represents Abuja’s share of the $2pb additional income thereof, the Senate recommended, should be used to pay salaries and emoluments for the proposed 30,000 new employees by the Federal Government.
The chamber raised the revenue target of the Nigerian Customs Service (NCS) for the year from N942.6bn to N1.5tr. The additional N557.4bn or 59.13% revenue, the Senators proposed, should be used to reduce the Federal Government’s borrowing for capital expenditure by N200bn.
The Senate retained the foreign exchange rate of N305/$, just as proposed by the Executive for economic stability.
The upper chamber insisted that proper investigation be carried out on the e-collection stamp duty domiciled in the Central Bank of Nigeria (CBN) over the years, so as to show probity and accountability, and of course, increase the revenue base of the country.
The Senate further called for proper investigation on the Nigerian National Petroleum Corporation (NNPC), to ascertain the actual cost associated with Joint Venture Agreements.
Speaking after the passage of the MTEF/FSP proposals, Dr. Lawan urged the Federal Inland Revenue Service (FIRS) to widen its tax net, stressing the need to diversify the economy.
According to him, “we have lost so much ground over the years. Time has come to diversify this economy, oil is becoming something else, it is not going to be a darling of anyone.
“So we need to have an economy that provides jobs for everybody and create wealth. This includes diversifying in agriculture, solid minerals and tourism”, he added.
Senator Lawan also charged committees of the National Assembly to ensure accountability in the procurement process, by ensuring “that our procurement process is properly monitored.
“This budget should give us that opportunity. There must be efficiency, prudence in the way and manner we do procurement”, Lawan insisted.

Photo caption: President of the Senate, Dr. Ahmad Lawan, presiding over the plenary in the upper chamber on Thursday, October 3, 2019.