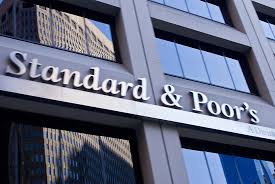 Standard & Poors Global Ratings on Friday affirmed its ‘B/B’ long- and short-term sovereign credit ratings on Nigeria.
Outlook, it noted, is stable, while affirming a long- and short-term national scale ratings at ‘ngBBB/ngA-2’, a rating it believes could become lower: “if we observe a significant acceleration in the accumulation of government debt beyond our current forecast, and if external financing gaps become larger and more difficult to fund. We could also lower the ratings if temporary foreign exchange restrictions remain in place for an extended period.
“We could raise our ratings on Nigeria if we see significantly higher economic growth prospects than our base case.”
The agency hinged its stable outlook on an “assessment that the oil sector improvements will support higher economic growth, fiscal revenues, and higher current account receipts over the next 12 months.
“The ratings on Nigeria are constrained by our view of its low level of economic wealth, weak external position, real GDP per capita trend growth rates below those of peers with similar levels of development, and future policy responses that may be difficult to predict. Following a contraction in the real GDP growth rate of 1.5% in 2016, we now expect Nigeria’s economy to expand at a still weak 1% in 2017, supported by rising oil and agriculture production and easing foreign exchange (FX) liquidity conditions.”
These ratings, it continued, are supported by the nation’s relatively low general government debt but high debt servicing costs and modest fiscal deficits, which are expected to improve this year, owing to the nation’s higher crude oil production that would help increase foreign currency supply and keep the current account largely in balance.
The rating, it added, was also supported by Nigeria’s foreign reserves which it says remain stable, just as economic performance remains weak, just like pace of growth which is below that of peers with similar wealth levels.
Nigeria’s foreign reserves, according to Isaac Okoroafor, spokesman of the Central Bank of Nigeria (CBN) told journalists at a seminar in Awka, Anambra State, last Thursday, climbed to a new high of $33bn on Thursday last week.
S&P hinged its rating partly on Nigeria’s often unpredictable political decision-making process as amidst relatively weak government institutions, even as it noted that the country has had its democratic system tested following the May 29, 2015 transfer of power to President Muhammadu Buhari’s All Progressives Congress (APC), from his predecessor- Dr. Goodluck Jonathan’s Peoples Democratic Party (PDP).
The unpredictable political decision-making process in Nigeria, added to the relatively weak government institution, it said, have often resulted “in mixed messages being promoted in relation to policies, such as the appropriate exchange rate regime for the country. Fiscal budgets are frequently passed late in the year, which delays the government’s responsiveness to economic challenges.
“We also view decision-making as centralized in the person of the president, although we note that the federal system of government helps to redistribute wealth and spread power to some extent. Nevertheless, we view most decision-making as centralized and institutions as relatively weak.”
This, the report explained, was made evident while the President was in London on medical vacation, as it threw up some domestic political uncertainty.
“We note that Nigeria ranks poorly on the World Bank’s Regulatory Quality and Rule of Law index, raising concerns regarding the enforcement of contracts. Nigeria also has a relatively poor ranking on the World Bank’s Ease of Doing Business and Ibrahim Index of African Governance (36 out of 54) Indices.”
S&P expects Nigeria’s economy to achieve average real GDP growth of 3% between 2017 and 2020, helped by rising oil and agriculture production and gradually easing foreign currency liquidity conditions.
This is then expected to gradually increase foreign currency inflows through rising export revenues, plus bank and government external borrowing, a mix of which could reduce foreign currency gaps in the country.
Although oil revenues support the nation’s economy when prices are high, S&P believes nonetheless that they expose the country “to significant volatility, in terms of trade and the government, to swings in the revenue base.”
Such volatility becomes worthy of note, against the backdrop of the fact that the country’s exemption from oil production cuts will be reviewed at the next meeting of the Organisation of Petroleum Exporting Countries (OPEC) this month, following the restoration of production to normal levels.