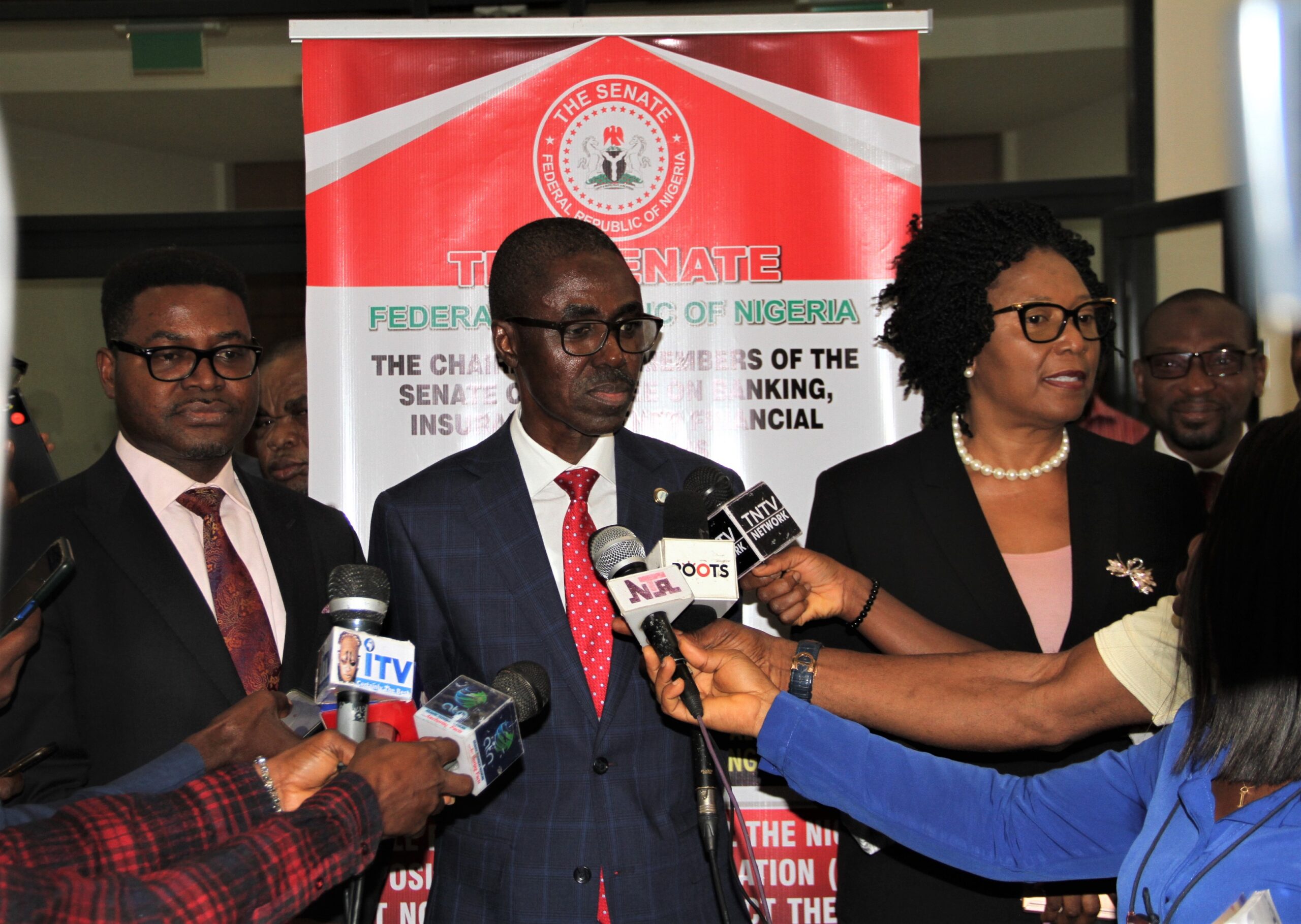 Caption: The NDIC MD/CE, Bello Hassan (middle), speaking with newsmen at the end of the Public Hearing on the NDIC Act 2006 Amendment Bill organised by the Senate Committee on Banking, Insurance and Other Financial Institutions yesterday in Abuja. He is flanked by flanked by the representative of the CBN Governor and Director, Legal Department, Kofo Salam-Alada (left), and the corporation’s Executive Director (Corporate Services), Emily Osuji (right).

Stakeholders across financial services industry stakeholders have expressed support for the Nigeria Deposit Insurance Corporation (NDIC) Act 2006 Amendment Bill which seeks to strengthen the corporation’s capacity to ensure a more effective and efficient to the stability of the financial system before the National Assembly.

At a public hearing organized Wednesday by the Senate Committee on Banking, Insurance and Other Financial Institutions, the stakeholders, including the Central Bank of Nigeria (CBN), were unanimous in their submission that the current NDIC Act 2006 was due for review. This, the noted, is given the tremendous economic and technological changes that had taken place in the financial landscape since the enactment of the NDIC Act in 1988 and the last repeal and re-enactment in 2006.

According to Bashir A. Nuhu, Director, Communication & Public Affairs Department, NDIC’s Managing Director/Chief Executive Officer, Bello Hassan, in his presentation at the public hearing, said the repeal and re-enactment of the NDIC Act of 2006 was not only timely but necessary if the Deposit Insurance System in Nigeria was to be placed at par with those of other jurisdictions in compliance with best practice.

He commended the Chairman of the Senate committee on Banking, Insurance and Other Financial Institutions, Sen. Uba Sani for taken time to study the legal framework for Deposit Insurance in Nigeria, identified the gaps in the framework and decided on the need for the repeal and re-enactment of the extant legislation. He also expressed gratitude to the leadership of the Senate and the entire senators for working tirelessly to bring the Bill to the legislative stage of public hearing.

Sponsor of the Bill, Sen. Uba Sani said rapid changes in the global financial system had made it imperative to strengthen the powers of the NDIC through the amendment bill towards advancing the stability of the nation’s financial sector in line with global best practice.

He assured that from the public hearing and submissions already received from stakeholders would be given serious consideration as the bill aims to make the NDIC autonomous and strengthen its powers in the interest of the country.

The Senate President, Sen. Ahmed Lawan, represented by the Chairman, Senate Committee on Rules and Business Sen. Sadiq Umar, said the new realities to which the NDIC was exposed, underscored the need for the amendment. He said, the Senate was interested in examining all sides relating to the Act before its passage.

The CBN Governor, Godwin Emefiele, represented by the Director, Legal Department, Kofo Salam-Alada said, the apex bank has no objection to the passage of the bill, having taken a critical look at the document. Recall that in as far back as 2015, the CBN had kicked against an earlier plan to rework the Act over some certain disagreeable portions.