Traders Watch 38
By AMBROSE OMORDION
Equities on the floor of the Nigerian Stock Exchange closed higher over the past week as stock prices relatively sustained an uptrend as traders took position in stocks that were recently adjusted for dividend to trade their support and resistance level for the very short-term profit.
The composite NSE All-Share Index gained 415.15 points to close the week at 25,653.16 points, after touching a high of 25,678.51 and low of 25,041.41 from its opening figure of 25,238.01 points, representing a 1.64% growth over the period on a higher volume of trade, compared to previous week’s. The buying volume of total transactions for the week was 96%, while selling position was 4% to continue the previous week’s bullish trend.
Market breadth analysis shows a positive sentiment as 31 stocks recorded gains, while 22 depreciated in value for the period.
NSEASI WEEKLY TIME FRAME 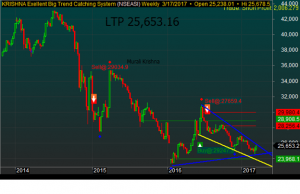 The NSE ASI on a weekly time frame has sustained its up trending on positive sentiments to move higher within a symmetrical triangle chart pattern that supports continuation or reversal of trend. Breakout of the triangular channel is imminent as momentum increases on market forces with traders and investors repositioning for more audited and Q1 numbers ahead.
The recent retracement of the index remained strong as trending ability of the market on weekly and daily time frame is strong with ADX above 20 for the period.
Traders should watch out for a breakout as more financials hit the market and the rekindling confidence is sustained. The first resistance level is at 25,812.09 and the second at 26,330.09 point, any move down to 25,348.08 and 25,012.21 respectively.
Looking at technical indicators, the NSEASI closed above the lower band by 38.9%, while MACD has been bearish in the last 23 trading days. RSI is reading 43.95 relatively out of the oversold region. Money flow index on a weekly time frame is turning up, while daily, it is looking up to indicate that funds are entering the market. The momentum indicators like RSI, CCI and SO are signaling buy, while MACD is saying exit.
UnitedCap: Can Q1 Sustain Momentum? 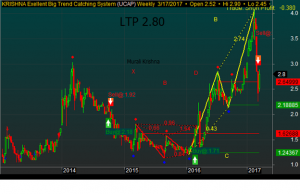 UnitedCap moved 15.70% higher over the past week on a bullish sentiment as traders re-entered on relative low price close to it first strong support price of N2.20 per unit, in expectation of its Q1 earnings report.
The current trend momentum and direction on a weekly and daily time frame are above ADX 20 at 43.40 and 33.61 respectively.
Traders should watch out as pullback is imminent due to the very short profit taking by market players to the current strong support level at N2.45 and second support price of N2.28, while traders should watch for any move up to breakout the first resistance level of N2.90 and second level at N3.06. The stock is trading above its 50 and 100-Day moving average.
Looking at technical indicators, UCAP closed above the lower band by 41.1%. MACD is bearish, while RSI is reading 48.66 almost out of oversold region. The momentum indicators are mixed as RSI and CCO are signaling buy, while MACD and SO signaled sell, MFI is looking up on weekly and down on daily timeframe. The buy-to-sell volume index revealed a weekly ‘buy’ position of 78% and sell position of 22%, while on daily time frame is 100% sell volume with 0% buy position as at Friday.
Analyst Opinion
New positioning should wait for pullback as it is trading above its minor resistance level.
Zenith Bank: When Reversal Is Imminent 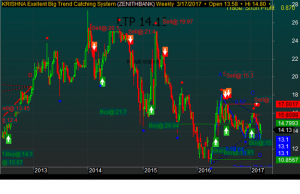 Zenith Bank moved 4.40% lower over the past week on a mixed sentiment after price adjustment for dividend to rebound within the period to close down. It has broken down its symmetrical triangle which supports continuation or reversal of trend, but the candlestick formation of the price action signals reversal that will be confirmed by market forces as trade open during Monday’s trading session. The trending momentum is still weak on a weekly and daily time frame as ADX is below 20. Traders should watch out for first resistance level of N15.00 and second resistance level of N15.80 each or reverse down to touch first support level at N13.70 and the second support level at N13.20 per share. The stock is trading below its 20 and 50-Day moving average at N14.13 per share.
Looking at the technical indicators, Zenith closed above the lower band by 22.1%. MACD is bearish in the last two trading days, while RSI is reading 43.16. MACD and CC1 indicators have signaled sell, while SO and RSI are indicating buy. MFI is looking down to indicate that funds are exiting the stock. The Buy to sell volume indicator reveal 61% buy volume on the weekly and daily, while sell position is 39%.
Analyst Opinion
Traders and investors should look the way of the stock as reversal is imminent
Expectations High On Eterna’s Full Year 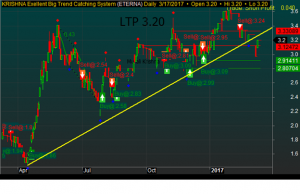 Eterna moved 7.74% higher over the past week on a bullish sentiment as market players re-enter after profit booking in expectation of its full year earnings report. This is despite the seeming slide in oil price and decline in stocks in that sector. The current trend momentum and direction on a weekly and daily time frame are above ADX 20.
Traders should watch as uptrend breaks the first resistance level at N3.30 and second resistance price of N3.48, or for any move down to the first support level of N2.96 and second support level (S2) at N2.74per share. The stock is trading below its 20 and above 50-day moving average.
Looking at technical indicators, ETERNA closed above the lower band by 48.1%. MACD is bearish for two trading sessions and relatively at overbought range. RSI is reading 51.19. All the momentum indicators like MACD, RSI and CCI are signaling sell, while SO signaled buy. MFI is looking up on daily and weekly timeframe.
Analyst Opinion
Reversal is confirmed, traders and investors should take position for the short and long-term. Keep your gaze on the trend and price action as dividend is expected.
Fidelity Bank: Short-Term For New Positions 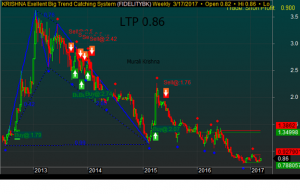 Fidelity Bank moved 6.17% higher over the past week on a positive sentiments owing to its low price attraction to traders, reversing the almost one year down trend, despite various attempts that failed, owing to the mixed financials and the market direction as the market expects its 2016 results any moment from now.
Traders should watch for first resistance level of N0.92 and second resistance level of N1.09 or reverse down to touch first support level at N0.81 and the second support level will be at N0.76 per share. The stock is trading below its 20-Day moving average at N0.86 per share. The current trend is weak on weekly time frame as ADX is below 20 at 10.98 each, but strong on a daily trend at 26.28.
Looking at the technical indicators, Fidelity Bank closed below the upper band by 42.3%. MACD is bullish in the last 14 trading sessions; RSI is reading 45.87 which is relatively oversold. All the momentum indicators are signaling buy, except for CCI that indicates sell. MFI is looking up to reveal that funds are entering the stock. The buy to sell volume indicator reveal 100% buy volume of the stock for the week and daily.
Analyst Opinion
Investors should HOLD, while new position should be taken for short-term with eyes on the trend of price action and earnings. 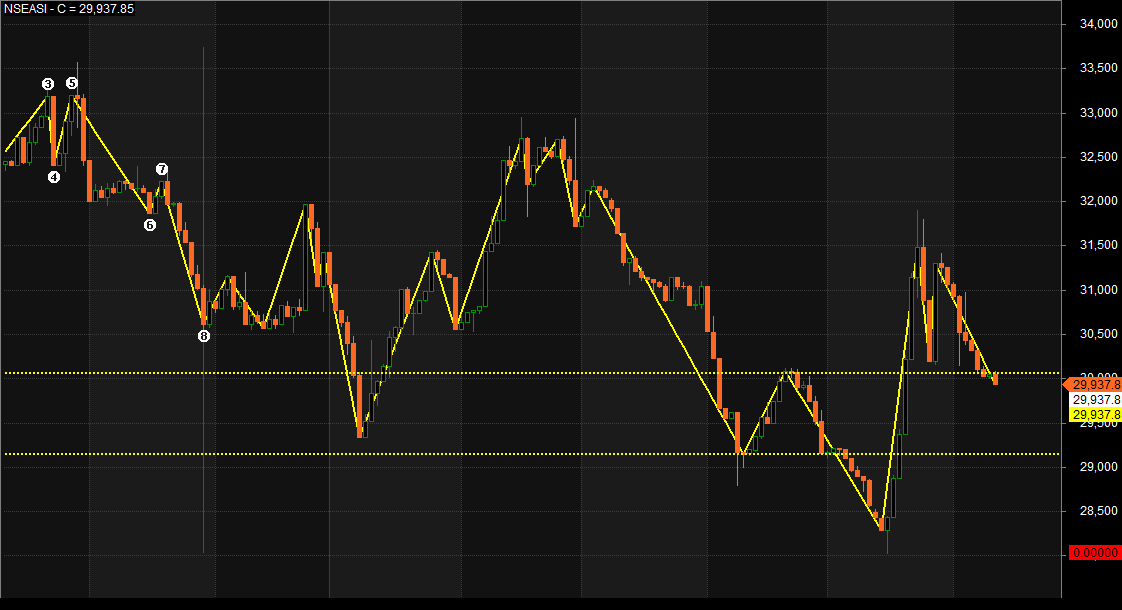 NGSE Downtrend May Slowdown On Imminent Return Of Bargain Hunters 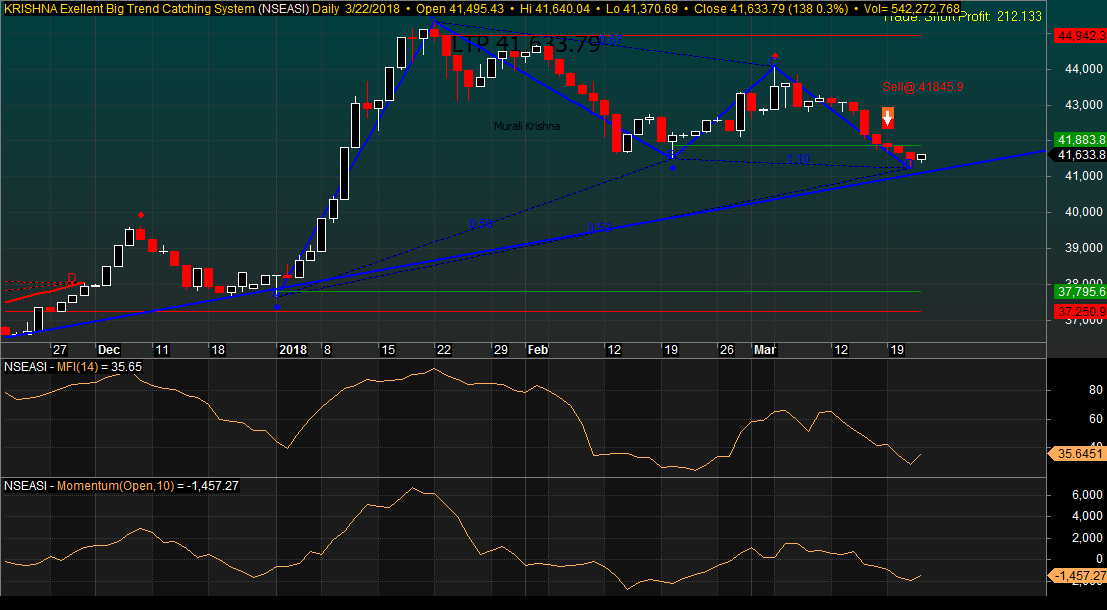 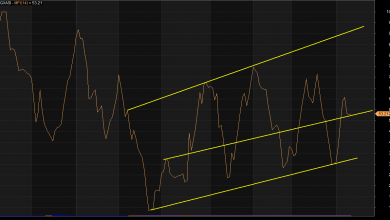