Vitafoam Nigerian Plc recently presented its unaudited nine-month earnings report to the investing community slightly earlier than that of the corresponding period in 2016, the highpoint of which was the growth in top and bottom-lines as the company came out of loss. This reality is yet to influence its share price, due to its relatively low dividend payout history and unstable earnings performance over time.
Investors and analysts expect that the company’s post-merger numbers arising from its expansion outside Nigeria, and the introduction of new products would further boost its earnings capacity, helped particularly by earnings from its foreign operations, considering the exchange rate. There is also revenue from its domestic operations as the company continues to penetrate new markets. Expectations are that with Vitafoam bouncing back to profit, dividend payment would likely range between 15 kobo and 18 kobo.
In the Q3 result under consideration, Vitafoam recorded an increase in turnover, indicating the effects of market penetration and new segments through introduction of new products, following the merger which is ensuring that the company is able to effectively withstand competition from the growing number of cottage companies in it sector resulting in enhanced sales. The high cost of financing its operations and increase in income tax left a deep cut in its profit as reflected in its profit margin for the period.
The company’s successfully repositioning of its furniture business, while venturing into spare parts production and strategic repackaging of the insulation business for enhanced value creation have all started yielding results as expected. This therefore means that investors should wait and expect better reward with its full year result expected in the market any moment from now. The low profit margin however suggests the need for better and enhanced cost management, while plugging loopholes if shareholders must reap the benefit of the ongoing revenue growth trajectory, through improved profitability.
Statistics for the third quarter ended June 30, 2017 revealed improvement in all financial indices for the period under consideration, with sales revenue growing by 34.32% above the comparable period. This came with a profit of N134 million as against a loss of N159 million in the corresponding period of 2016, which translated to Earnings Per Share (EPS) of 0.13 kobo, as against the 15 kobo loss per share in the 2016 Q3, while Return on Equity (ROE) came to 4.11%, as against -4.53% in 2016.
As noted earlier, the company’s profit margin is poor by all standards at 0.91%, even when compared to the negative 1.45% in the corresponding period of 2016, just as Book Value stood at N3.13 from N3.27, as a result of the increase in profit and retained earnings. 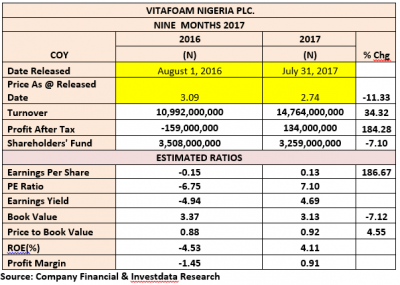 Looking at the company’s earnings movement since the begin of the last financial year ended September 30, 2017, the numbers have been unstable but on the strength of its Q3 numbers the expected full year earnings per share is projected to be in the region of 25 kobo and dividend possibility of 15 to 18 kobo as mentioned earlier. Being the first full year report, the numbers and payout (if impressive) and dividend is recommended, it might usher investors into the 2018 market and elicit positive reactions.

The price action of Vitafoam shows an uptrend movement that started since March on positive sentiments, aided by the 12 kobo dividend payout, which was confirmed by the impressive Q1 results that was sustained till June. It remained trendy in the rectangle chart pattern with resistance price of N3.07 and support of N2.63. On the expectation of it full year financials the possibility of break out or down is high, depending however on the actual numbers.
The chart reveals a high possibility of the uptrend continuing to breakout the next resistant level of N3.07.
On a daily time frame, the stock is strong as it is trading above it year open and 50 day moving average. Despite the possibility of pullbacks as result of profit taking, the stock has the momentum to retrace up.
Analysts Opinion/Recommendation
The equity is good for dividend investors as it guarantees annual returns. Also, traders may enjoy the likely rally if full year financials beat expectations as money market interest rate continues to crash ahead of the Federal Government’s green bond and the first Monetary Policy Committee (MPC) meeting of 2018, holding in January. Note also that monetary policy easing has technically commenced in a bid by the authorities to bring down cost of funds and drive the expected growth in 2018 and beyond.
But the management of Vitafoam should continue with its strategic business plans of repositioning its subsidiaries to boost performance, while utilising modern research and development exposures for cutting costs and enhance profitability.

History
Vitafoam Nigeria is a leading manufacturer of flexible foam, reconstituted foam and other household products. It has the largest foam manufacturing and distribution network which facilitates just-in-time delivery of products throughout Nigeria, with off-shore operations in Ghana and Sierra Leone.
The company was established on August 4, 1962 by British vita and Unilever and listed on the NSE in 1978. Vitafoam is currently Nigeria’s most prominent and leading producer of Polyether, foam products, furniture, upholstery products and adhesives. In 2010, it became a major shareholder of Vono Products and established two sister companies; Vitapur Nigeria (an insulations products manufacturing company) in the Oil & Gas industry and Vitablom (a fibre processing and soft furnishing company). Finally in 2012, it established its youngest subsidiary- Vitavisco for production and sales of Visco elastic foam and latex products. 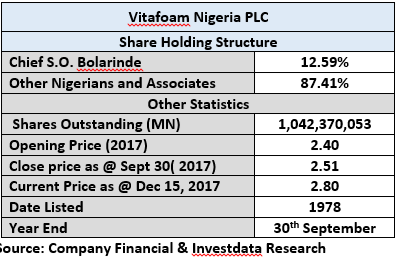 2016 Performances Analysis
In the period under review, sales revenue witnessed a drop, while operating and finance expenses continued to grow, push the company into red for the year, with cost of sales pointing in the northward direction at a time the business environment was very challenging and purchasing power of Nigerians was weak.
Despite all of these, and its red account for the year Vitafoam was forced to pay a dividend from its retained earnings just to keep shareholders smiling, for the first time in almost 10 years, with a dividend of 12 kobo per share which reflected the seeming loss position for the period,
Turnover was down comparable to the N17.19 billion recorded in 2015, while loss after tax stood at N32.03million
The price performance for the year moved down to reflect the performance pattern, but reversed up in 2017 on the strength of it improving numbers for the period and positive general market performance. 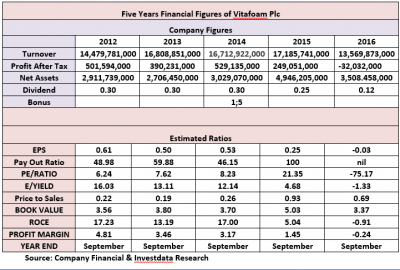