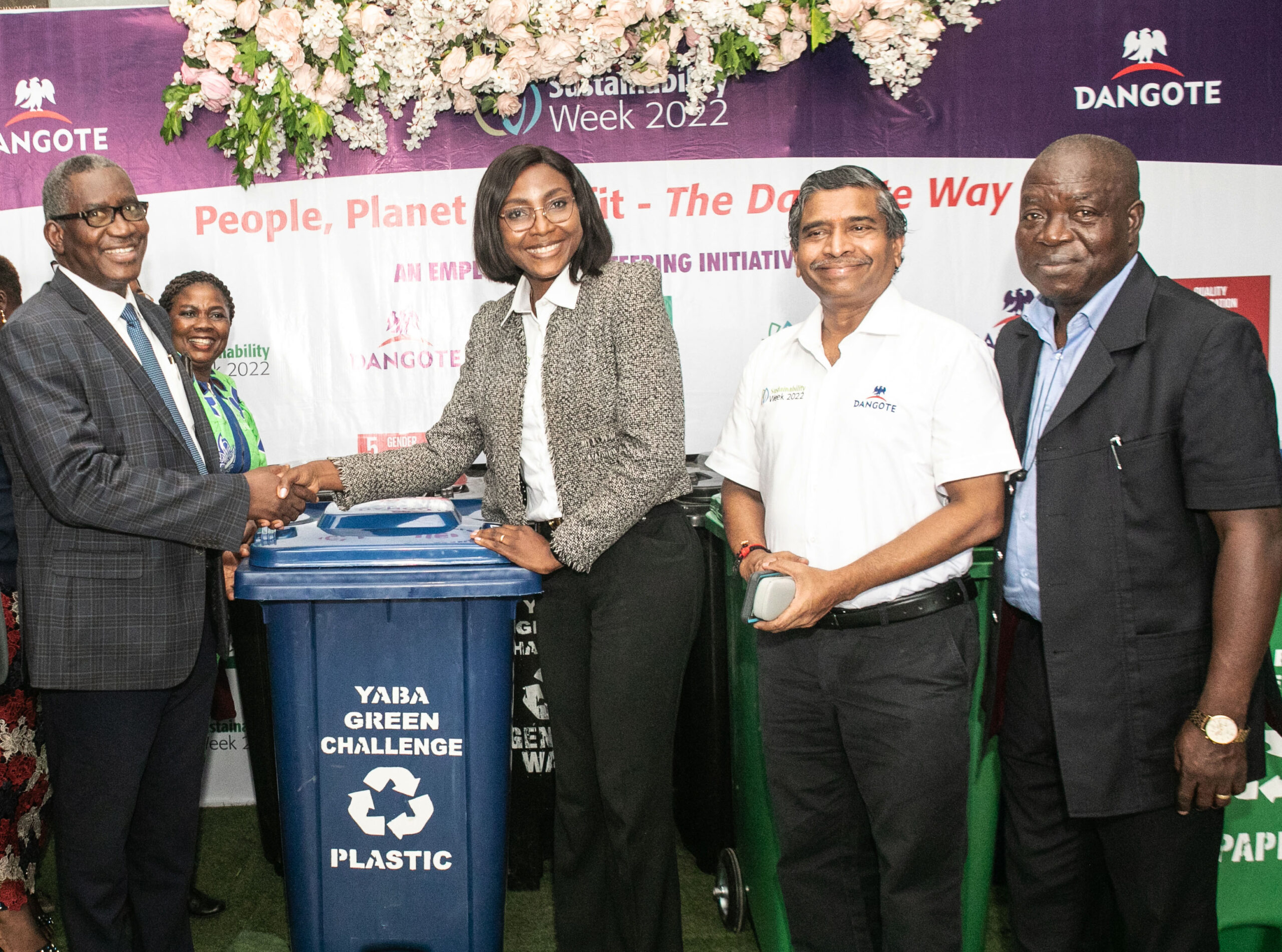 As part of the initiative targeted at students of Nigerian higher institutions, the company partnered the Yaba College of Technology, Lagos, and the UNESCO International Centre for Technical and Vocational Education and Training (UNESCO-UNEVOC) in a competition tagged ‘Yaba Green Challenge’.

The finale of the competition where 10 sustainability innovations emerged from over 30 entries, was witnessed by Dangote employee volunteers and executives.

The judges engaged finalists based on such projects as mixed media painting from sawdust, Fungal growth medium from industrial wheat waste Medicinal mushrooms from sawdust and water hyacinth. Others were mycelia blocks from spent mushroom substrate, Wearable art from the aluminum beverage can pull tab wastes, and sculpture from metal scraps. The students also made a paving interlocking block project with plastics, Hollow sandcrete blocks from plastics, and a mixed media painting made with waste plastics and paper, as well as animal feed produced from water hyacinth.

The event began with a tour of the Yabatech Art Museum, a courtesy visit to the Rector, and donation of waste segregation bins made to the management of the school. At the finale of the Yaba Green Challenge competition which had over 300 staff and students, the Rector of the College Engr Obafemi Omokungbe endorsed the initiative, describing the partnership between Yabatech and Dangote as a very strategic and exciting one. He stated that “talks are ongoing to obtain patent rights for the innovations showcased at the event to share with the private sector for adoption”.

Leading the Dangote delegation was General Manager Sustainability, Dr. Igazeuma Okoroba expressed satisfaction at the exhibition. In her remarks, she stated that “the goal of DangCircular was to spur Nigeria’s transition to a circular economy and support wealth creation through waste.” She also encouraged the institution to carry out cutting-edge research for the economic growth of society.

The winner of the grand prize of the competition was Ms. Ajide Comfort of the Fashion Design Department. In a very emotional reaction, Ms. Comfort whose project was Wearable art from an aluminum beverage can pull-tab waste, expressed her gratitude to Dangote Cement and pledged to continue finding ways to integrate waste recycling in her designs.

In the same vein, the company implemented “the Obalende Smart Money Campaign”, a financial literacy awareness campaign, to help over 300 traders of the Obada Obalende market to gain insight into managing money and limited resources sustainably. The initiative was part of activities to mark Sustainability Week in Nigeria and Pan Africa.

Speaking on the financial literacy campaign, the lead, Health, and Safety, James Adenuga said the theme of the yearly programme: ‘People, Planet and Profit – The Dangote Way’ is driven by employee volunteers. In his remarks, he explained to the traders the meaning of sustainable development and why it was a topic of concern for traders. Sighting examples with relatable stories, the Head of Sustainability, Dr. Okoroba explained that “While seeking for their daily bread, it was important that the traders ensure that the needs of the present and future generations are not threatened by poor treatment of land, water, and natural resources available to us”.

Diversity and inclusion were other aspects Dangote Cement sought to make an impact on society during Sustainability Week as the Dangote volunteers engaged in a charity outreach targeting the Down syndrome community and the visually impaired. The campaign for the visually impaired was to commemorate White Cane Safety day, an annual event celebrated worldwide every October 15.

The Dangote volunteers visited the Women and Children with Disability Initiative (WCWDI) home for visually impaired children, interacting with the children. The company made donations of food items, beverages, and specialized educational materials for the blind including white canes, slates, and marbouqs. Following this, the team of volunteers conducted a sensitization walk of the neighbouring community to enlighten residents on the white cane as a right of passage for the visually impaired which should be respected.

In another outreach to the Down Syndrome Foundation Nigeria (DSFN) located at Iju Fagba, Lagos, the Volunteers toured the vocational centres where persons with Down syndrome were trained in life skills. The National President of the Downs syndrome Association, Mrs. Rose Mordi, noted that ‘Down syndrome is not a disease but a condition which can happen to anyone”. She also gave insight on the theme of Down Syndrome Awareness Month – “Nothing About Us Without Us”, acknowledging Dangote’s support and calling for other private sectors to follow in the same vein.