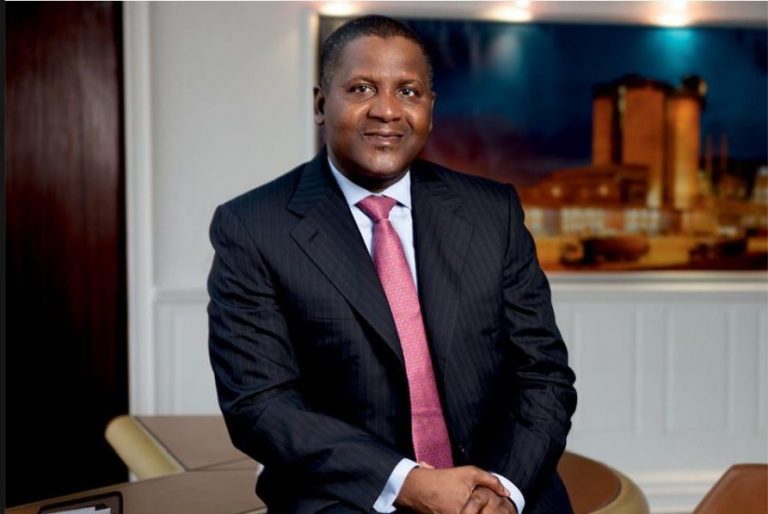 For the ninth consecutive year, Nigeria’s Alhaji Aliko Dangote has been named Africa’s wealthiest person yet, with an estimated net worth of $10.1bn in the latest ranking of the world’s billionaires by Forbes, the American global media company.
Dangote’s worth slipped marginally from $10.3 billion, a year ago, owing to the slight drop in the stock price of his flagship company- Dangote Cement.
Of Africa 54 nations, only eight are represented on the Forbes list, with South Africa and Egypt dominating the top-10 table on the continent, but in the overall rankings, with five billionaires each. Nigeria comes third with four billionaires, including Dangote.
Unlike Dangote, Nassef Sawiris of Egypt is the new number two richest, with a net worth of $8bn, growing from $6.3bn a year ago. Sawiris’ most valuable asset is a stake in shoemaker Adidas worth $4bn. The rise in Adidas’ share price alone added nearly $1.5bn to his fortune since January 2019. He also owns a significant stake in fertilizer producer OCI N.V. In 2019, Sawiris and U.S. investor Wes Edens purchased the remaining stake they didn’t own in the U.K. Premier League team Aston Villa Football Club.
They are followed by Mike Adenuga, owner of Nigeria’s mobile phone network, GloMobile, as well as up and downstream oil group- Conoil, in addition to extensive real estate holdings. Credited with a $7.7bn worth, his mobile phone network, Globacom, is the third-largest operator in Nigeria, with 43m subscribers, while his oil exploration outfit, Conoil Producing, operates six oil blocks in the Niger Delta.
Just two of the 20 billionaires are women: Isabel dos Santos, the eldest daughter of Angola’s former president, Jose Eduardo dos Santos; and Folorunsho Alakija of Nigeria. Dos Santos’ fortune has declined to an estimated $2.2 billion, down $100 million from a year ago.
Africa’s billionaires are as a group became richer than a year ago, with the continent’s 20 billionaires worth a combined $73.4bn, up from $68.7bn a year ago.
Country rankings are unchanged from a year ago: Egypt and South Africa are tied with five billionaires each, followed by Nigeria with four and Morocco with two. Forbes found one billionaire each from Algeria, Angola, Tanzania, and Zimbabwe. That’s the same as last year but a better representation than nine years ago, when only four African nations were home to ten-figure fortunes.
Dangote, Africa’s wealthiest man, founded and chairs Dangote Cement, the continent’s largest cement producer. He owns nearly 85% of publicly-traded Dangote Cement through a holding company. Dangote Cement produces 45.6 million metric tonnes annually and has operations in 10 countries across Africa. Dangote also owns stakes in publicly-traded salt, sugar, and flour manufacturing companies. Dangote Refinery has been under construction for three years and is expected to be one of the world’s largest oil refineries once complete.
Explaining the methodology used in the ranking, Forbes Africa said “Our list tracks the wealth of African billionaires who reside in Africa or have their primary businesses there, thus excluding Sudanese-born billionaire Mo Ibrahim, who is a U.K. citizen, and billionaire London resident Mohamed Al-Fayed, an Egyptian citizen. (Strive Masiyiwa, a citizen of Zimbabwe and a London resident, appears on the list due to his expansive telecom holdings in Africa.
“We calculated net worths using stock prices and currency exchange rates from the close of business on Friday, January 10, 2020. To value privately-held businesses, we couple estimates of revenues or profits with prevailing price-to-sales or price-to-earnings ratios for similar public companies. Some list members grow richer or poorer within weeks or days of our measurement date.”
Sharing the third position with Mike Adenuga with $7.7bn worth is a South African, Nicky Oppenheimer. Heir to his family’s fortune, Oppenheimer sold his 40% stake in diamond firm DeBeers to mining group Anglo American for $5.1 billion in cash in 2012.
Johann Rupert, chairman of Swiss luxury.
Nigeria’s Abdulsamad Rabiu, the founder of BUA Group, a Nigerian conglomerate active in cement production, sugar refining, and real estate, is ranked eighth on the list.
In the 19th position is Strive Masiyiwa with a net worth of $1.1bn; while the top-20 bracket is closed by another Nigerian- Folorunso Alakija with a net worth of $1bn.